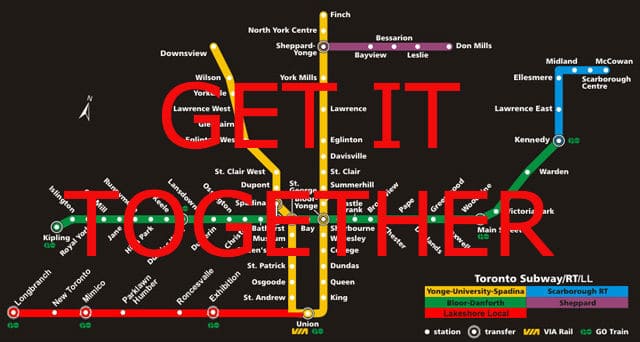 "Yes, the sacred, unwritten code of public transportation: do not make eye contact, do not speak unless spoken to, do not let excess butcheekage spill onto the seat beside you, and get your backpack off the seat while you're at it."

A TTC Rider’s Code of Conduct, Or: How Not To Piss Off Your Fellow Passengers

The other day I was riding the subway home from work, dutifully minding my own business, when my commute was rudely interrupted by a wildly comical man dancing in the subway car. “I’m working on a track with Drake and Rhianna!” he kept repeating to anyone who would listen.

At one point he even took off his headphones and put them on the head of another man, who looked massively uncomfortable as he continued to tell his Drake and Rhianna fairytale. At this point, everyone in the car is fully alarmed. What is happening? Why he is talking to to other people?? This is not okay! For everyone else on the subway, this is an outright breach of Proper Subway Etiquette.

Yes, the sacred, unwritten code of public transportation: do not make eye contact, do not speak unless spoken to, do not let excess butcheekage spill onto the seat beside you, and get your backpack off the seat while you’re at it. Because public transportation is not a place to make friends, or be comfortable; rather, it is a place to silently hate your lack of alternate transport.

Other violations of Unwritten TTC Behaviourial Code include:

These people aren’t all bad, of course. Speaking as someone who often breaks the subway rules (I have been known, on occasion, to make eye contact with people… the horror!), I would just like to iterate that we should have a little more tolerance for those who choose not to spend their commute sullenly staring at the floor. I understand the desire for a quiet and uninterrupted journey home after a long day, but honestly, out of all the evils in the world, I think the chatty commuter is a lesser one. Chat on, guy. And send me that Drake album when Riri is done with it!