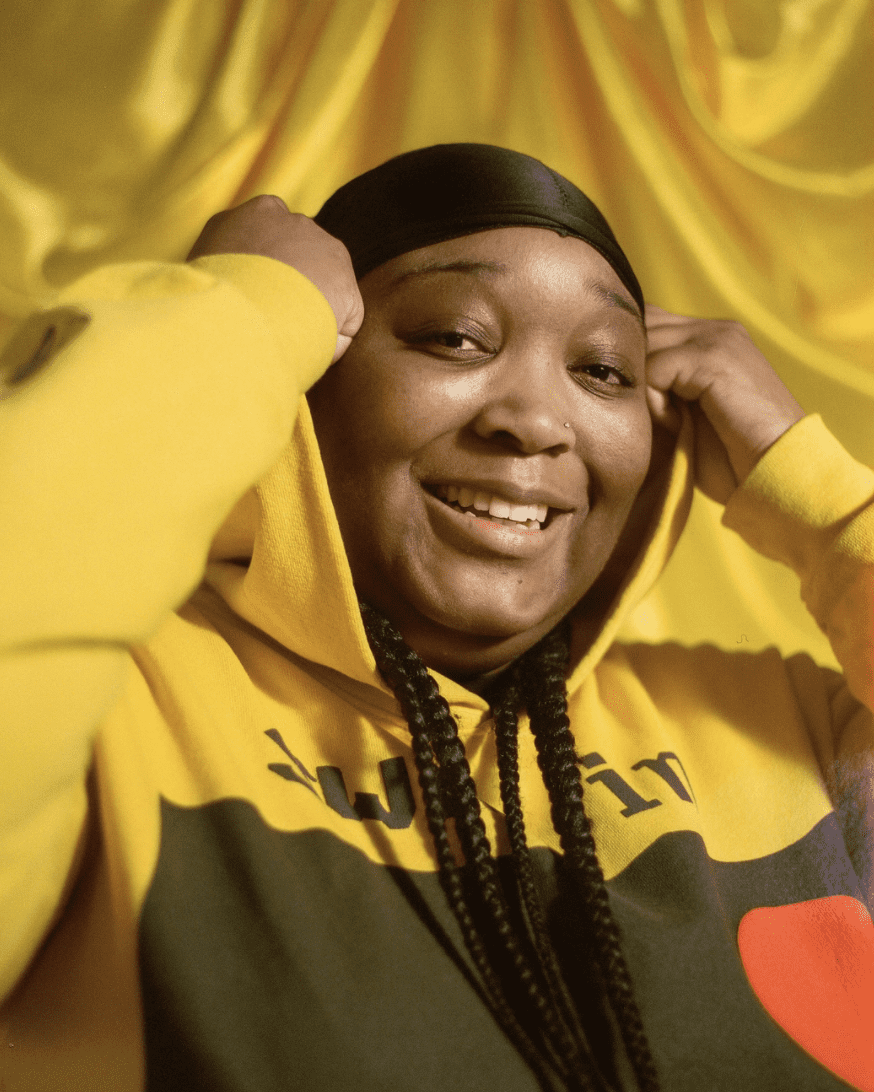 "The song is really about sitting on the train and envisioning a better life for yourself."
Life Stories  Performing Arts

When the audio on Zoom decided to finally connect, I was immediately greeted by the cool, mellow sound of DijahSB’s voice. Born Kahdijah, the Toronto rapper’s relaxed demeanour is hard not to notice, and is mirrored perfectly in many of their songs. Our conversation ranged from their craft, identity, and their new single “Green Line.”

In the age of virtual meetings, it’s difficult to translate who we are through profile pictures and microphones, to try and get the person on the other side of the screen to get a real sense of who we are. Yet, Dijah does this almost effortlessly while we speak, first telling me about where they got their moniker.

“Some people think SB is an abbreviation for something, but it kind of isn’t. It’s a play on one of my favourite sneakers, the Nike SB. I love them and streetwear, and when I came in [to rap], everyone was kind of obsessed with Jordans—I was the outcast, trying to be different. My love for sneakers started with the SBs, and my name is an ode to them.”

Did you know you always wanted to pursue rap as a career and craft?

I always knew that I wanted to pursue it. I just didn’t know how to make it a career or how you could make money off it. So before I got into the DijahSB role, music was more of a hobby for me and something that I just really enjoyed doing. Then, the transition to DijahSB took me a few years to figure out, thinking about how it would be a full-time thing for me. 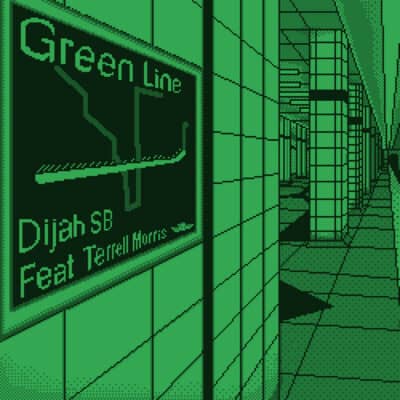 Sometimes folks have very different approaches that lead them to like their career path. Especially as a journalist and writer, I’ve realized people’s backgrounds are so diverse. Some people have a journalism degree, and others are more creative. Some come from entirely different experiences to find themselves in this career. What about you? Did you go to school for music? Or did you learn by yourself?

It was totally by myself. For many people, even if they don’t have a theoretical background in music, their parents usually put them on to good music, and that wasn’t even the case for me. My parents weren’t really big music heads—I just ended up discovering music on my own. I was just in my own realm, to be honest. I’m the first in my family to pursue music.

When did you realize you had a knack for this? How did the people closest to you react to it?

I don’t think there ever was a shift, except for maybe one time when I wrote a song in 30 minutes, and it was such a good song. I thought, “this comes so easy to me; it’s definitely something that I’m supposed to be doing with my life.”

My family has always been supportive. I’ve never had the drawback of a parent not wanting me to pursue music. They’ve always just been happy that I’m pursuing it, plus I always kind of had a fake backup plan. I went to Humber College and got a degree, but I always knew that there wasn’t anything that I wanted to do other than music.

What did you study at school?

I actually have a criminal justice degree.

That’s very cool. I wanted to be a lawyer at one point, but it didn’t really pan out that way. I guess we end up where we need to be!

You mentioned that writing comes easy to you, which is evident in your quick-witted music. What is your creative process?

Honestly, I think it has a lot to do with my anxiety. I don’t even like leaving unread emails. If somebody depends on me to do something, my brain immediately goes into work mode. And if something is really good, and brings the passion out of me, then I’ll get that done within hours, to be honest. That kind of just kind of ignites something in my brain that says, “go, go, go.”

There’s such an authenticity to you. What was it like introducing yourself as a non-binary artist? When it comes to gender roles in performance, in rap, there are “girly” rappers and more “masculine” rappers, like the tomboys, and there’s a market for either. Men in rap aren’t categorized, I think. There’s just this general urge to organize people. But when you’re a non-binary rapper, I imagine you don’t run into any of that because the binary doesn’t apply to you. You’re in this place where you have to make the rules up as you go along.

One day, I went on social media and just shared that I identify as non-binary. As you said, a lot of people just want to categorize people, and they get so confused and want to put me on the end-of-the-year list of “Top 10 Female Rappers” or whatever… It’s great to always talk about the gender binary and educate people on it because people can get lost. You’re right about the boxes that people can be put into. I honestly want the music to be judged based on sound and quality.

So much in entertainment has changed because of the pandemic. What do you miss about performing? Can you recall your first show?

My first performance was at some downtown Toronto venue. I remember being scared shitless. From there, it was kind of like, “okay, now I understand.” Luckily, when things were a little bit better, I got to do a small tour of Canada. That was cool. And I was supposed to go on tour at the end of January, but things got really bad again, so we’ll see. I enjoy shows. I don’t enjoy after-shows. Having people come up to me, even though I know they’re being sweet, it’s so awkward having them praise you.

Are you one of those people who’s difficult with praise? Like you can’t take a compliment?

It’s just—I’m blushing! You got me. But I love seeing the aftermath of shows; people on Instagram repost the videos and pictures. It’s kind of cool, but it can be difficult. I never understood how difficult touring was, but I got a glimpse of it. And now I know how to prepare, so once things get back better, hoping I can get back on the road… I think my favourite show out of all the shows that I did was in Halifax. 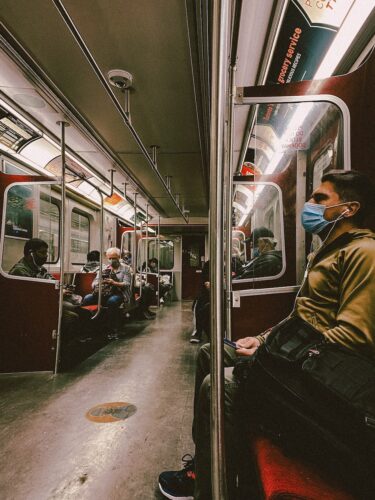 Your song, “Green Line,” featuring Terrell Morris, is a love letter to a part of the city I feel doesn’t get enough love. Can you talk a bit about this song, where the idea came from, and the composition?

“Green Line” was written because of all of the things I’ve seen in Toronto, like homelessness and high housing rates, and everything kind of weighing on my mind.

The song is really about sitting on the train and envisioning a better life for yourself, looking out that window and just daydreaming. I did a lot of that on the green line and wrote a lot of music on the green line. So that’s the kind of vibe that I wanted to bring to the song and wanted it to feel like home.

I know you think really highly of your collaborator on that track, Terrell. Who else are you listening to right now?

Yeah. Right now, I’m just listening to the new Cordae album. I’m listening to Terrell, too, along with Buddy and Mick Jenkins, and I’ve been getting my main inspiration from them. 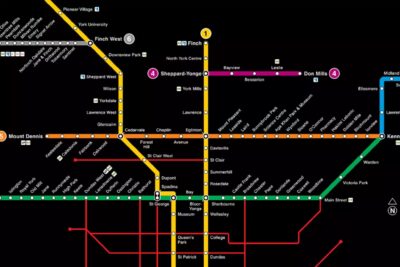 I’m sure you’d love to go back to touring, but aside from that, is there anything you are looking forward to artistically this year?

I’m gonna work on my third album this year. Hopefully, I can go out to LA to do that. I’d love to do that, and it would definitely be a good thing for me to go out there to work and try my best to collaborate. Besides that, I’m just relaxing, chillin, claiming the opportunities come to me, and trying my best every day.

Do you have any advice for your younger self, now that you have experience and will record your third album? Do you have any words that you would extend to younger Dijah, or maybe to an artist who’s just starting?

Honestly, just set realistic expectations for yourself. Be a lot more open about who you are— don’t be afraid of expressing yourself. Put as much as you can into it, and hopefully, it comes back tenfold.

Furqan Mohamed is a writer from Toronto. Her work has appeared in Room magazine, Maisonneuve, Toronto Life, and The Local, among others. Her debut collection of poetry and prose, “A Small Homecoming,” was recently published by Party Trick Press. She is currently culture editor for mimp magazine and is studying at the University of Toronto. You can find her on Twitter @heyfurqan.

"The song is really about sitting on the train and envisioning a better life for yourself."