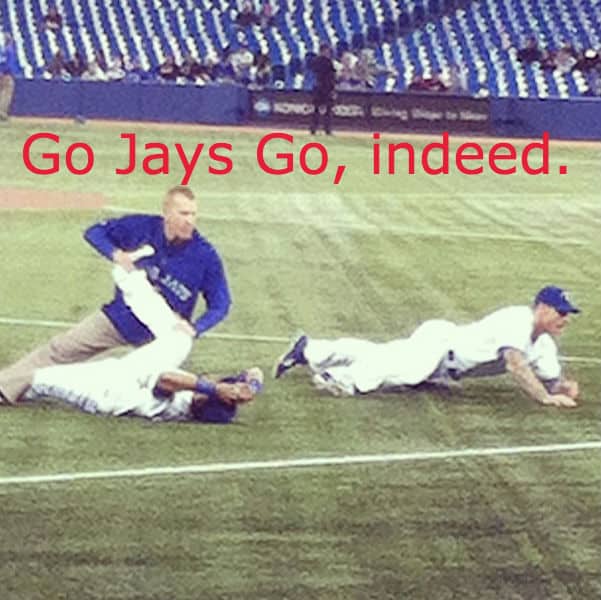 "Whether you're at home or at the stadium, sometimes it's hard to figure out who the eff you're looking at on the field. They don't make it easy for us by wearing basically the exact same outfit."

A Who’s Who of the Toronto Blue Jays (And Their Butts, This is Ann’s Column)

Whether you’re at home or at the stadium, sometimes it’s hard to figure out who the eff you’re looking at on the field. They don’t make it easy for us by wearing basically the exact same outfit. Unless you’re a certified butt connoisseur like me, you can’t distinguish the players simply by looking at their luscious behinds. And trust me, that takes hours and hours of Google image searching and a fair amount of perverted dedication that not everyone has time for. So here for your comfort and ease is a quick and dirty cheat sheet.

Pitchers – For simplicity and ease, I’ll just name our starting pitchers (the guys who start pitching from the first inning on) and not our entire bullpen (the pitchers that come in when our starters get tired/start shitting the bed).

R.A. Dickey (43) – The only knuckleball pitcher currently playing in the major leagues. He’s bearded, with feather-y hair that peeks out from under his hat not unlike Farrah Fawcett’s. One of the few Jays that wears his socks up. Also looks like a hot dad.

Mark Buehrle (56) – This one’s super easy because Buehrle looks exactly like his name would suggest: burly. “Burly” means “bearded and looks like he hunts for wildlife to eat,” right? It also means “one of the best pitchers in the American League right now.”

Drew Hutchison (36) – One of the young gun starting pitchers. On May 16th, he pitched his first complete game of his career, which is incredibly impressive because that doesn’t happen often nowadays. He’s currently got a beard and looks like every guy I’ve had a major crush on.

J.A. Happ (48) – Recently joined the starting line-up so I don’t know too much about him and what he brings to the team (and my eyes). Yet. Physically, he’s got a shaved head, a little Jason Statham-y if you’re squinting.

Dioner Navarro (30) – New to the Blue Jays this season, and I’m already loving him. He’s so smiley! Also he looks like Manny from Modern Family. Resembles Teddy Ruxbin.

Josh Thole (22) – He’s R.A. Dickey’s catcher. Dickey has his own catcher because knuckleballs are notoriously tough to catch since they “float and dance” (actual words used to describe that pitch, for realz). Thole looks like the super hot boy-next-door you’ve secretly been in love with your whole life. It sucks (base)balls he plays the only position that requires a face cover. Plus side: tree-trunk thighs because of all the squatting he does.

Eric Kratz (31) – The catcher that’s not Thole or Navarro. Looks like a cool supply teacher.

Edwin Encarnacion (10) – Power hitter, usually has a chin strap, and when he hits a home run, he sticks his arm out like he’s got a bird on his shoulder as he rounds first and second base. Look for the meme. It’s incredible. He ties Bautista right now for the most home runs on the team, but I’m sure this will change by the time you read this. Just look for the guy hitting home runs all the time.

Adam Lind (26) – My boyfriend. That cute pale man with a grotesque red goatee? Yes, that’s my boyfriend. Lindy. No, I’m not prone to major delusions. I could write a dissertation on Adam Lind, I love him so much, but getting a PhD in Meaty Booties isn’t a thing. Yet.

2nd Base – We don’t really have a permanent second baseman at the moment because of an injured Maicer Izturis and an offensively lacking Ryan Goins.

Steve Tolleson (18) – Tolleson is what Lawrie will look like in 10 years if we’re all lucky, minus the tats.

Ryan Goins (17) – He hasn’t been around really because even though he’s amazing at defence, his batting stinks worse than an accidental fart under the covers. But in case he gets called up from the minors again, he’s got a shaved head and chews gum a lot. He’s the guy who never gets on base.

Brett Lawrie – You can’t miss him. He’s the heartthrob with tattooed arms and a jawline you could cut diamonds with. Also he’s arguably one of the greatest athletes on the team. He’s either at third or second base, as of this writing, and also in my dreams.

Juan Francisco (47) – Another one of the thicky boys. He’s easy to recognize as he’s the switch-hitter who pretty consistently hammers the ball out of the park. You really can’t miss him.

Jose Reyes (7) – Look for the guy ALWAYS smiling and laughing. I’ve yet to see any other baseball player look so consistently joyful and happy. What a smile. Sometimes has questionable facial hair, specifically a weird goatee/beard that sticks out like some sort of beautiful pharaoh. A sexy butt pharaoh.

Jonathan Diaz (1) – He’s tiny (comparatively, on our notoriously squeezeable team) and reminds me of Mighty Mouse because he’s so quick on his feet. It looks like he’s in the early stages of a mohawk/possible faux-hawk.

Melky Cabrera (53) – On the real, I’m running out of words to describe these guys. I’m fully aware I keep on saying “thick and juicy,” but honestly there is no better way to describe them. “Hey Ann, why don’t you focus on their skills and talent and personalities instead of objectifying them?” UH BECAUSE YOU CAN’T SEE PERSONALITY ON THE FIELD. You can, however, very clearly see a nice body you just want to cuddle with all winter (and spring and summer and fall) with. Fine, another hitter that’s on fire right now. You can recognize the Melk Man as the guy getting on base or hitting homers. Oh, he also has a weird chin strap.

Colby Rasmus (28) – My beloved CoCo is one of the leagues best centre fielders and he’s got the Wilson’s Defensive Player of 2013 award to show for it. What is that award? Beats me. Does he deserve it? For sure. Though his hair is pretty normal right now, he’s had questionable hair (ie CORNROWS) in the past, his facial hair is patchy, he talks like he has marbles in his mouth, AND I WOULDN’T CHANGE ANYTHING ABOUT HIM. HE’S PERFECT.

Anthony Gose (8) – Um. Me being at my rudest, I describe him as looking like “beef jerky with teeth.” I’m not gonna apologize for it, but I’m fully aware how terrible it is. Look, I’m clearly biased against the lanky dudes. I’M NOT SORRY. On the positive, he’s a really great centre fielder and is impressively quick on his feet. His beef jerky feet.

So, now you know who’s who, you’ve got no excuse not to get out to a game and get vocal about who’s impressing you.