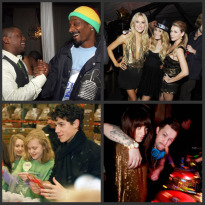 If you spent the morning after New Years curled up on your couch, amidst an array of plastic champagne bottles and poor decisions, creeping other people’s Facebook photos to see how your night stacked up, we’ve got an even juicier basis for comparison. Read on to find out where your favourite celebs (and post-celebs) rang in 2010. Take notes for next year.

1. Don’t Go To The Hood, Bring the Hood to You
Snoop Dogg shimmied into 2010 at the Harlem Nights in Hollywood Bash, where anyone in an Empire State of Mind could have a New York New Years without sacrificing the palm trees or the right to wear skimpy clothes outside. The night was hosted by Mekhi Phifer, and doubled as his birthday party (FYI-this is just cheating.), and Clipse and Allen Iverson were among the guests.

2. Party With Your Favourite Frenemies
The ladies of The Hills past and present celebrated at Beso in Hollywood. LC wore an adorable hat, S-Pratt looked like a Vegas showgirl, all was as it should be. Lo was there, and Taryn Manning (remember, she took a roadtrip with Britney Spears?) dancing with the skinny guy from…Road Trip.

3. Do Good (for your image)
Ensuring that everything in the universe is as it should be, Jonas Bro Nick spent his NYE giving out food and promise rings (not really) at a North Texas Food Bank, to raise awareness for Feeding America. Volunteer this year-you could meet an underaged musical sensation.

4. Party Like You’re Famous (even if you’re not really famous anymore)
Ghosts of Celebrities Past gathered in Las Vegas at LAVO for a party hosted by Nicole Ritchie. Joel Madden was on the decks, Wilmer Valderrama was scamming underaged tail, and Christina Aguilera was excited people still wanted to take her picture. (We make fun, but kudos on the outfit, Nicole. Not so kudos on the husband.)

Steph Pratt and LC at Beso

Taryn Manning and DJ Qualls dance it up at Beso

Wilmer on the prowl in Vegas

An interview with Lauren Conrad about her new book, big life stuff, and what makes her happy