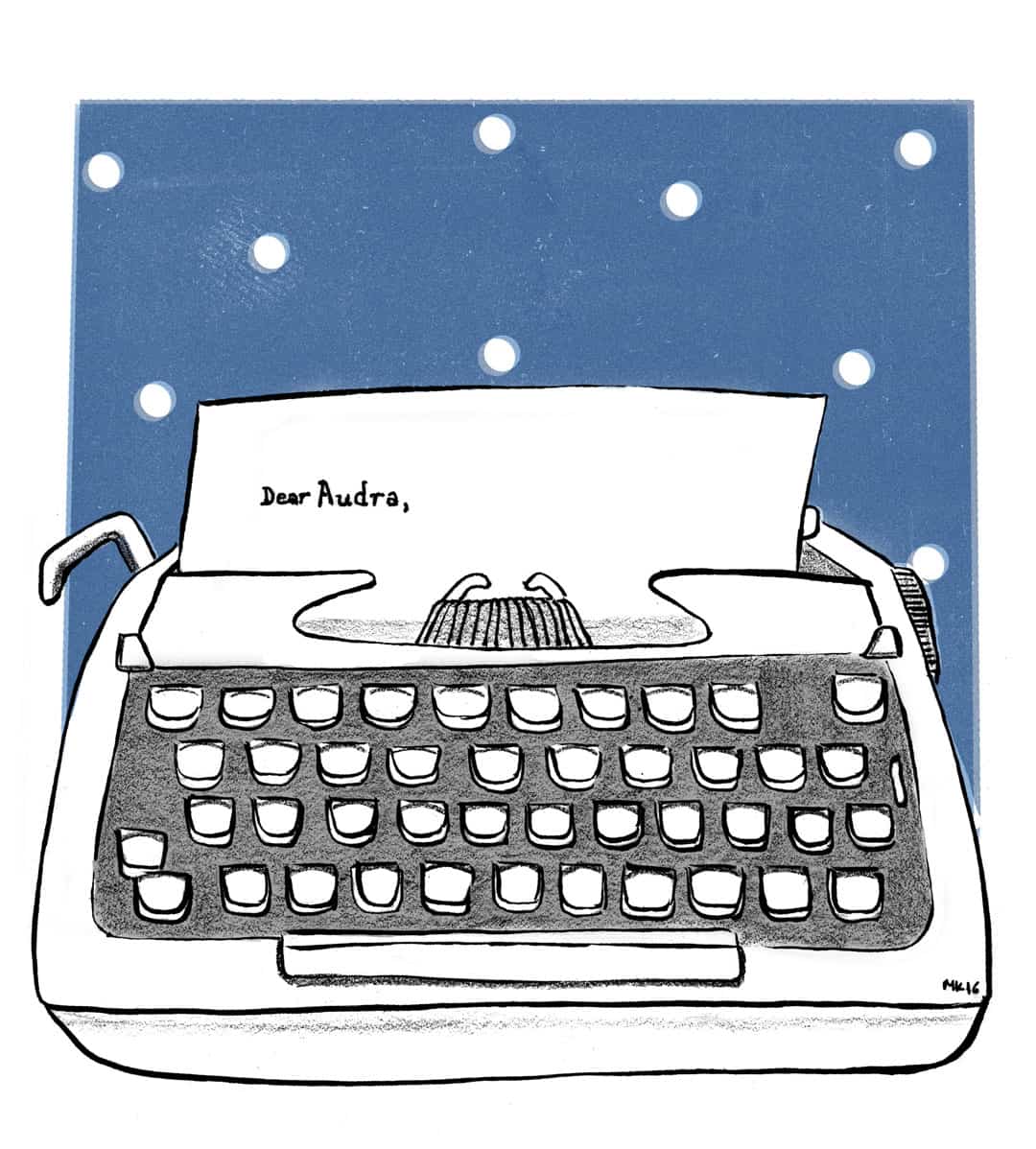 I want to help people, and like you, I enjoy doing it through writing, so I’m trying to direct more energy to that.

Do you have any advice on how I might strive to reach that goal? I have tried soliciting questions/dilemmas from people that I can address, but that hasn’t been very effective.

First of all, let’s all acknowledge the reality that I am fully not one to give advice about an advice column right now. In the interest of full disclosure, I am not someone who completely has her shit together.

At the end of March, I travelled to San Francisco on vacation. It was my intention to get my slightly overdue advice column filed from there. I booked an Airbnb with a big outdoor patio and pictured myself sitting there, breezily typing the answer to some question, emailing it to Jen, and then going for a walk where I’d meet Dave Eggers and become best friends with him.

Instead, I had an impulsive Tinder date that threw off my equilibrium for an embarrassingly long time. I felt either swoony and distracted or anxious and jangly. Either way, it seemed I was utterly unqualified to give advice.

I would like to say that I am now writing from a place of stability, but it’s not true. I just decided to stop kicking the can down the road and get back to this column, despite how embarrassed and stuck I feel about it.

So, setting aside questions of how much I may or may not deserve this advice column, how did I get it? Writing out my entire career history feels a bit self-indulgent, but also I think it is valuable for people to see that there are lots of ways to end up somewhere.

I remember sitting in a school assembly when I was in my last year of high school, panicked about what I was going to do when I graduated. I had accidentally fast-tracked my way through, realizing only a few months earlier that I was going to have enough credits to graduate a year early. There were still Ontario Academic Credits back then, and mine were: English, English Literature, Writer’s Craft, French, German, and History. Guidance counsellors suggested a “Liberal Arts” degree (I still don’t know what that is) until I figured out what I wanted to do. That seemed like a really expensive way to spend a few years, and I had already sussed out that a lot of my friends who went to university without a solid plan seemed to come back to Oshawa in a few years.

The rest of my life was shaped by the next thing that happened: I grabbed a booklet of community college courses and started flipping through, hoping to see a single job I thought I could ever do. I stopped when I got to “American Sign Language Interpreter.” It was a three-year program available at both Sheridan College in Brampton and St. Clair College in Windsor. “Great, I thought. I’ll move to Toronto and go to school in Brampton.” All of a sudden, everything felt very settled to me.

I marched triumphantly into that guidance counsellor’s office and told him I knew what I wanted to do. He was lukewarm on the idea, telling me that I had the smarts for university and that I should still do the four-year Liberal Arts degree before this three-year college course. Nothing about this idea made any sense to me, so I sent off my applications to both schools just in case.

It turned out that Sheridan College required a 500-word essay from applicants, explaining why they wanted to become an ASL interpreter. This was something I could have done in probably an hour. I was a good writer and had a lot of compelling things to say about breaking down communication barriers between people. But…I just didn’t do it.

What I didn’t know until a few years ago is that I have ADHD. That is also something that has impacted my career path, for better and for worse. If you are someone who has anxiety and trauma and hypervigilance and trouble focusing, I really recommend reading Gabor Mate’s Scattered Minds. Even just checking out the few chapters linked to there could make a few million lightbulbs go off for you.

Not writing that paper meant that my only option to become an ASL interpreter was by attending St. Clair College in Windsor. When I finished that program, I spent a few months at the AIDS Committee of Toronto’s Deaf Outreach Project. Then horrible Mike Harris got elected and cut all of our funding and I had visions of ending up back in Oshawa after all. In a panic, I applied for jobs across the country. I landed one in Annapolis Royal, population 481, and moved there ten days later. After a short flight from Toronto to Halifax and a much longer bus ride from Halifax to Annapolis Royal, I arrived in my new home and burst into tears. I had never lived somewhere so small.

One of the things I did to cope with this isolation was to start a website called Marigold. Our goal was to build an online community for Canadian feminists from coast to coast. We wanted to have an “online journaller” (this was 1997) from every province and territory, but I don’t think we ever had Nunavut and PEI at the same time. For the next three years, I spent my days interpreting ASL and my evenings running the Marigold message boards.

The site got a bit of attention, and when Judy Rebick came to Halifax to film an episode of her CBC show Straight From the Hip, I called in sick to go on national TV as a guest. A year or so later when she was putting together a crew of people to be part of launching rabble.ca, I got a job as a part-time moderator of the site’s message boards. While running those boards, I did a one-year Applied Communication Arts program at the Nova Scotia Community College’s Middleton campus, followed by a one-year Advanced Diploma in Public Relations at the Halifax campus.

When I graduated, I started a company called Lefty Lucy Communications. I didn’t know how to run a business (I arguably still don’t), but I was saved from financial ruin a few years later when I was offered a six-month contract at the Canadian Union of Public Employees. One thing about working for unions is that you basically get paid in bags of gold. The other thing is that you may have a nervous breakdown from the workload.

My six-month contract turned into a year and a half of work that took me from Ottawa to Edmonton and back to Ottawa. I left CUPE and wrote speeches for Jack Layton during the 2008 federal election. I went to work on Parliament Hill. I left Parliament Hill to work first for Oxfam and then, when I couldn’t handle living in Ottawa anymore, I moved to Toronto to be the Digital Strategist for the Because I am a Girl campaign.

I did a lot of writing in all of these jobs, but never as myself. And when I tried to get back to my own writing (a year-long stress leave later), everything that came out of me was clunky garbage. I thought writing was behind me and tried to be fine with that. I would boost the work of others, and start good conversations on my Facebook, but not generate much of my own content. Then I saw a man named Benjamin-David Tomlinson perform a story, and it broke my heart and put it back together half a dozen times. I approached him after the show and tried to tell him what it meant to me, but when he asked me about my own art, I was left stammering. He told me my heart was trying to send me a message, and the blog post I wrote about our conversation was the first thing I churned out in ages that felt like my own voice.

Around the same time, I was added to a lot of amazing secret Facebook groups for feminist writers, and I felt like such a fraud and imposter. One day, in one of those groups, a woman named Sara Benincasa mentioned that she was about to teach an online memoir writing class. I have no interest in writing a memoir ever (please quote me on that if I decide to), but I thought what better way to find my own voice again than by excavating painful stories from my past and telling them in an engaging way? So I signed up, and it legit changed my life.

Sara’s teaching style was perfect for my attention span. She’d have us jot something down quickly for two minutes at a time and workshop it. Then flesh it out a bit more over a longer period of time, then workshop it again. By the end of the class, I usually had 600 words.

After taking her class, I gradually started to pitch and place articles again, with the support and encouragement of a crew of amazing women. One of those women referred me to Jen McNeely, the editor of She Does the City, and after an embarrassingly long period of time I eventually started sending her some work. The initial series of posts were about a self-help book that I love. I then pitched a self-help column to Jen and was so thrilled when she went for it. My treasured pal Mariel signed on to do illustrations, and it was all going great until March.

I’m hoping it will soon be going great again. It has been a struggle to get questions, and I need to sort out that piece for sure. But I love hearing stories and offering perspectives that I hope will be illuminating.

I don’t know how to wrap this up exactly, other than to reiterate what I said earlier: there are a lot of ways to end up somewhere. There are probably just as many ways to screw it up once you get there.