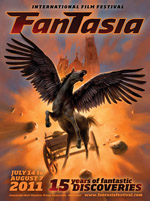 So, it’s July in Montreal again. My thighs are resolutely glued to my computer chair, I’ve drunk gallons of pink lemonade and four fans are pointing DIRECTLY at my face; I would bet my bottom dollar that you, fair reader, are in a very similar position. Thusly, I’m here to once again save you from the blistering reality of summer in the city: one of SDTC’s very favourite Montreal festivals is currently in full-swing, beckoning passers-by out of the heat and into a theatre seat (that rhymes!).

The 15th annual Fantasia Film Festival (July 14 to August 7, 2011) is entering its third week of screenings, and you need to unstick yourself from that chair/floor/significant other and hurry on down! Considered the largest and most recognized genre film festival in North America, Fantasia always has a prestigious line-up of premieres and guest appearances; screenings take place at eight unique venues across town (several of which are air-conditioned), including Concordia’s Hall Theatre, Place-des-Arts and the Cinémathèque Québécoise. To top it off, individual tickets are only $9 each – and once you’ve seen this year’s wicked program, your wallet will thank you.

As Fantasia’s 2011 offerings are vast and somewhat difficult to choose from, here are three cool films to check out for those who want to truly get their feet wet in the sea of genre cinema:

Making its Montreal debut, Bellflower (2011) chronicles the lives of two L.A.-based, apocalypse-obsessed slacker buds, who build a mega-muscle-car which will survive any and all catastrophes the rapture could throw their way. Written and directed by Evan Glodell, this experimental adventure-like drama features an unpredictable romantic subplot, an interesting exploration of manhood, and of course, violence. Hey, it’s Fantasia – what do you expect? July 22, 7:15pm – J.A. De Sève Theatre & July 25, 3pm – Hall Theatre.

In a slightly different vein, Battle Royale (2000) tells the bizarre tale of a class of high school students in Japan who are forced onto a deserted island where they must ‘eliminate’ their peers until there is only one survivor. With English subtitles and graphic violence, this film is based on the highly controversial novel of the same name. July 23, 11:55pm – Hall Theatre & July 24, 11:30am – J.A. De Sève Theatre.