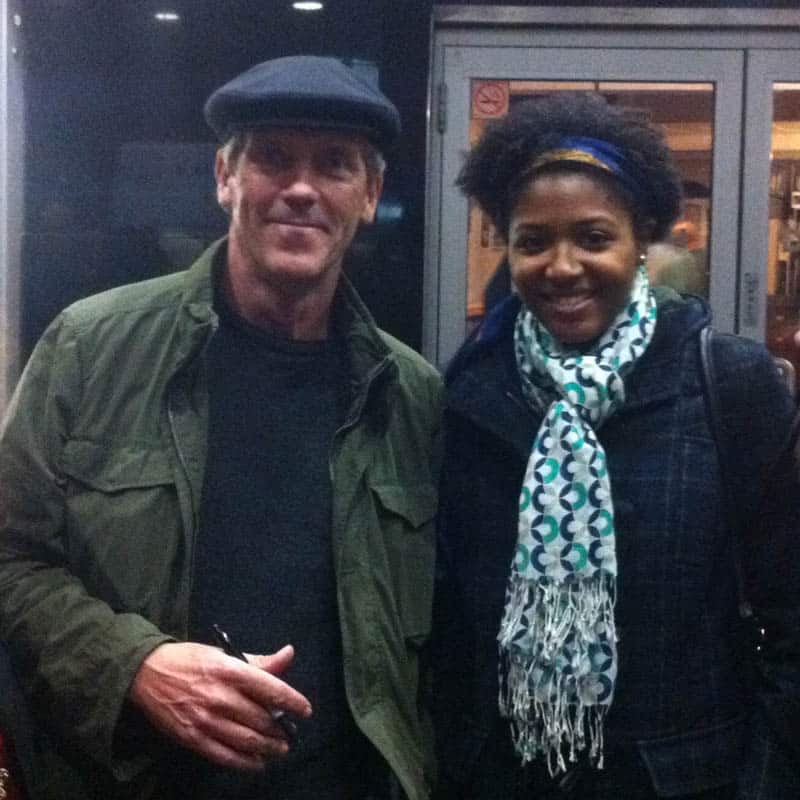 “I can already picture myself giving birth and telling the nurse “yeah, this kid is cute, but in 2013 I met Hugh Laurie.”

An Evening with Hugh Laurie and a Defense of Fangirls

“You mean so much to me that I love you in a way that is just shy of creepy,” – Tina Fey to Carol Burnett

Alright, it’s time for me to come clean: I am a fangirl. Since the rise of the Beliebers and their cousins the Directioners this has been used as a term of derision. When we think of the fangirl, we think of a crazed twelve-year-olds obsessively tweeting @Harry_Styles. “Oh you listen to One Direction?” people will ask snootily. “I thought you were cooler than that.” (This has been said to me by adult humans.) Well, if watching cute British boys prance around onstage in matching outfits and hairstyles is uncool, consider me… the opposite of Miles Davis, I guess. But 1D is not my first fangirl obsession.

Long before anyone figured out how to pronounce Zayn Malik, I was obsessing over Hugh Laurie: known to you as the star of TV’s House, known to me as James Hugh Callum Laurie, my sun and stars. After discovering House I spent the summer of 2005 basking in the utopia of copyrighted materials that was pre-Google YouTube, and watched everything Laurie had even breathed in. I knew it was true lust love.

So I was a liiiiitle excited (read: teetering on the brink of a cardiac episode) when I learned that Laurie was bringing his Didn’t It Rain tour to Toronto. (Hugh Laurie is also a blues musician and has made two studio albums, CATCH UP.) I texted a fellow fangirl: HUGH LAURIE. OCTOBER 20. THIS IS NOT A DRILL. Her reply was instant: WHERE DO WE THROW OUR MONEY?? Plans were going to be made. Dreams were going to be realized. We were going to see Hugh in the flesh [heart eyes emoji].

The day of the concert was probably the most surreal of my life – the Copper Bottom Band was great and Laurie himself was funny and energetic (he referred to Torontonians affectionately as “Ron”). But the real highlight came afterward when, after about an hour of waiting, we met Hugh Laurie. That’s right, we met him. He spoke to me. He laughed at something I said. He breathed his hot, sweet whiskey breath in my face…okay pull it together, Evan. Whoever said that you should never meet your heroes was obviously an idiot because Hugh (we’re on first names now #BFF) could not have been nicer. Meeting him was the best thing that has ever happened to me and I’m 80% sure that nothing else will ever top it. I can already picture myself giving birth and telling the nurse “yeah, this kid is cute, but in 2013 I met Hugh Laurie.” Being a fangirl made this happen. Being a fangirl paid off.

So the next time you go to make fun of an intense fan, remember my happiness. We fangirls can achieve the euphoria normally associated with heavy drugs simply by taking a picture with a middle-aged English man. We are not encouraged, in this life, to be passionate about things. Especially if those things are ‘uncool’ or boring to others. But what exactly is the problem with pursuing things wholeheartedly? With loudly loving the things that make you happy? For waiting outside in the freezing cold to stammer a joke at a British sketch comedian turned blues pianist? Say it loud, say it proud, folks: I am a fangirl. It’s brave. It’s fun. Heck, I think it’s kind of poetic. In the words of the philosopher Rihanna, we found love in a hopeless place. I also love Rihanna… does anyone know when she’s touring next?