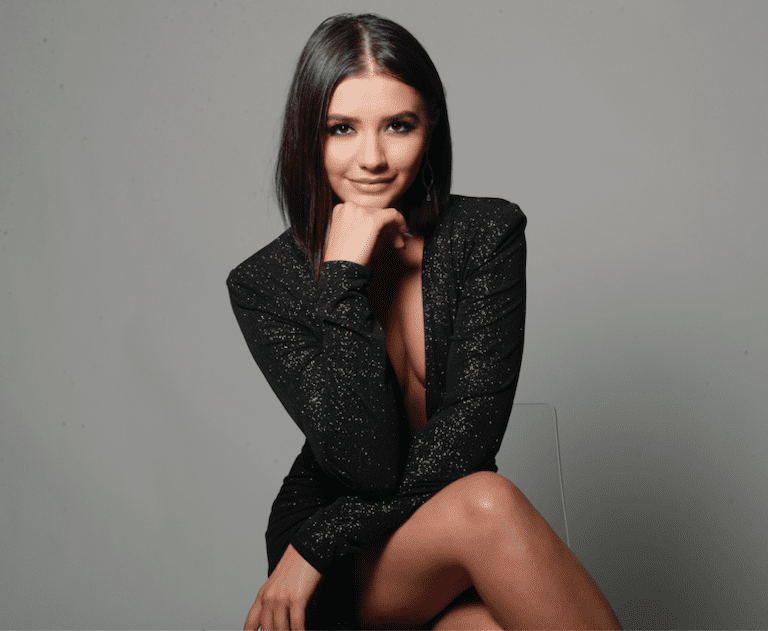 Toronto-born actor Ana Golja is not even 25 yet and has already amassed over 30 credits in television and film.

Like a lot of local talent, Golja grew up while starring on Degrassi (Degrassi: The Next Generation, Degrassi: Next Class), but her experience on set dates back to when she was just five years old. This Thursday, audiences can watch her star opposite Academy Award winner Lou Gossett Jr. in The Cuban, a feature film she also produced with her partners Taras Koltun, Sergio Navarretta (also director) and Alessandra Piccione (also screenwriter). It made waves when it premiered at the Whistler Film Fest, and it’s slated as the opening night feature for the 2020 Canadian Film Fest.

In The Cuban, Golja plays Mina, a young Afghan immigrant who lands a job as a caregiver in a nursing home, working closely with elderly patients suffering from dementia. Its a riveting performance, and one that is close to her heart.

In advance of Thursday’s screening, airing on Super Channel Fuse at 9 p.m. ET/PT, we caught up with Golja to find out the backstory of The Cuban, and what she’s learned from the experience.

What was it that inspired The Cuban?

I was inspired to create content of some sort because of my great-grandmother’s struggles with Alzheimers. At the same time, my partner, Taras Koltun, was thinking about his late grandfather, and he wished that he spent more time with him and listened to more of his stories and his wisdom. Between the two of us, we felt that we had to share a meaningful message with the world. That’s when the idea for THE CUBAN was created!

How did this film make you think about elderly people differently?

Through the research process for this film, I had the honour and pleasure of meeting many elderly people from all walks of life. I got to hear their stories and it really “clicked” — these people were young once too…they have SO many stories that should be shared and cherished. So most of all, I just learned to appreciate our elders and realize how truly lucky we are to have them in our lives.

With nursing homes being the hardest hit by the Coronavirus, how has your perspective shifted, from when you first shot the film as compared to now? How has the pandemic made you think of nurses or nursing homes differently?

This pandemic has amplified how I already felt…we need to value our elders. We need to be patient and kind with them, listen to their words of wisdom…you never know when they’ll be taken away from us.

What was the biggest self-discovery you made over the course of making The Cuban?

The biggest self-discovery I had through making The Cuban was that I am a lot more powerful than I realized. I’ve always been a confident person, but as a new producer, there was a lot to learn. When we first started developing the project, I was very timid about having this new title. I didn’t quite understand what it meant and wasn’t sure if I even deserved it. But as the process went on, I came to realize my value to this project — there’s a lot of power in that.

How did this film make you think about Cuba differently?

I had been to Cuba many times prior to shooting The Cuban there, however, I had never really ventured outside the confines of my resort. Through filming in Havana, I discovered what a vibrant culture they have and how warm-hearted the people are. Viva Cuba!

When you look back on this project, years from now, what will stick with you the most?

This is my first feature film as a producer, so there will be a lot of firsts to remember when I look back on this years from now — from volunteering at a hospital, to location scouting trips, our cultural meetings, getting Lou to sign on as “Luis”, shooting in Cuba — I will think about all of these incredible moments shared with these incredible partners of mine.

What philosophy is currently helping to guide your life?

One philosophy that is helping to guide my life is to live in the present. It’s easy to get caught up in all the goals you want to achieve, but the journey is just as important as the destination.

#HolidayJoy Giveaway #3 ❄️ We want to send you