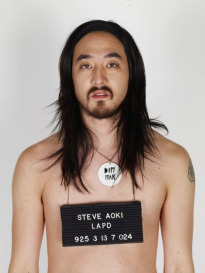 In case you haven’t noticed, we’re all about the road trip. Really, we’ll take any excuse. So, know someone who lives in London? Know someone who used to live in London and has a plethora of Western couches just waiting for you to crash on? Lucky you, rev the engine, get on the 401, kids-it’s roadtrip time!

Why? The one and only Steve Aoki will be DJing at Club Mansion tonight. Yes, swinging his raven black hair, yawning behind the decks, wearing a graphic tshirt…the whole Aoki show is coming to town.

The man behind Dim Mak records has been popping up around the city of late, making a surprise appearance at Strangelove for Dance Like You Fuck and playing at the exclusive Absolut Vodka Bay Street subway party a few weeks ago, causing quite a stir at both. Tonight’s event will likely be just as different—I hear those Londoners know how to party. So mix up your Thursday and show up half an hour late to work tomorrow morning, bedraggled in last night’s finery, McD’s breakfast sammie in hand-nothing mixes up fall like a spontaneous DJ adventure.

For guestlist and bottle service, e-mail info@clubmansion.ca. Tickets are $20 and doors open at 10 pm.