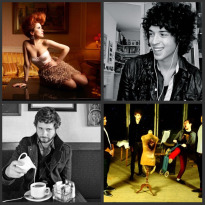 2009 was definitely the year of the pop diva-with Beyonce and Rihanna tearing up the charts, as well as overall world domination by Lady Gaga. However! We can now officially say that going goo goo for Gaga is SO last year (although that will likely prove to be a bit too much wishful thinking)! 2010 is here, and it is bracing for impact at the barrage of new stars vying for your attention. Here’s a few hopefuls you’ll probably have on your iPod by the end of the year.

Julian Perretta
As if the hairdo wasn’t attention-grabbing enough, piano-pop cutie Julian Perretta has been riding a slow and steady wave to stardom for all of 2009. Starting with an impassioned endorsement from Perez Hilton that subsequently led to opening slots on tour with Beyonce and Girls Aloud, Perretta’s long-anticipated debut album will be hitting North America’s shores come summer. Singles “Wonder Why” and “Ride My Star” have been floating around the net for months inspiring a Youtube storm of wildly gesticulating teenage girls lip-synching into their webcams. I’d say that’s probably a clear sign of a breakthrough artist, or, you know, the apocalypse. http://www.julianperretta.com/

The XX
England’s The XX and their Nugazer ilk (new wave shoegazers…so clever, eh?) have been tipped as the next British Invasion. So, let’s hop on the bandwagon, shall we? The hipsters of England and probably that guy in your 4th year English Lit class with the horn-rimmed glasses, plaid shirt and side-bag will say they aren’t good anymore, which means they’re probably actually working their way into mainstream listen-ability. These 20-year olds are deft at genre mixing to a degree that they’ve made something all their own. The male and female voice-mixing goes between artsy atonal and airy ambience overtop a misleadingly spacey backing track and all the time maintaining a unique R&B influence. http://thexx.info/

Everything Everything
With lyrical references including gamers respawning, airbrush software and Textese, Manchester’s Everything Everything is all new, all original, and breathing life into the increasingly samey Indie scene. At first listen, you might feel confused and intimidated, but fear not! You will soon find yourself grinning inwardly at the ridiculously mishmashed lyricisms while simultaneously marvelling at a chill-inducing cacophony of staccato syntax, three-part harmonies and Nintendo-style synth. Mario-bros tech meets indie-boy savvy. http://www.myspace.com/everythingeverythinguk

Dan Mangan
Vancouver’s Dan Mangan is currently touring in support of his sophmore album Nice, Nice, Very Nice which has been attracting some serious kudos from the Canadian critic crowd. Single “Robots” features Mangan’s throaty rumble over an ascending trumpet line before falling into an irresistible drunk-sway sing-along; sure to set your tunic a tremble. http://www.danmanganmusic.com/

Paloma Faith
Yes. I know. ANOTHER British songstress with a quirky fashion sense and slightly silly hair. “Oh let me guess,” you sneer, “she’s the next Amy Winehouse?” No. Not even Amy Winehouse will be the next Amy Winehouse; it’s time to look at the new and not the next! And that’s where Paloma Faith fits in. She somehow managed to crash the UK press and hit the talk show circuit before anyone knew who she was and now she’s exploding across the pond in a flurry of pom poms and family-friendly burlesque. She’s bound to be sneaking up on us any moment now… http://www.myspace.com/palomafaith