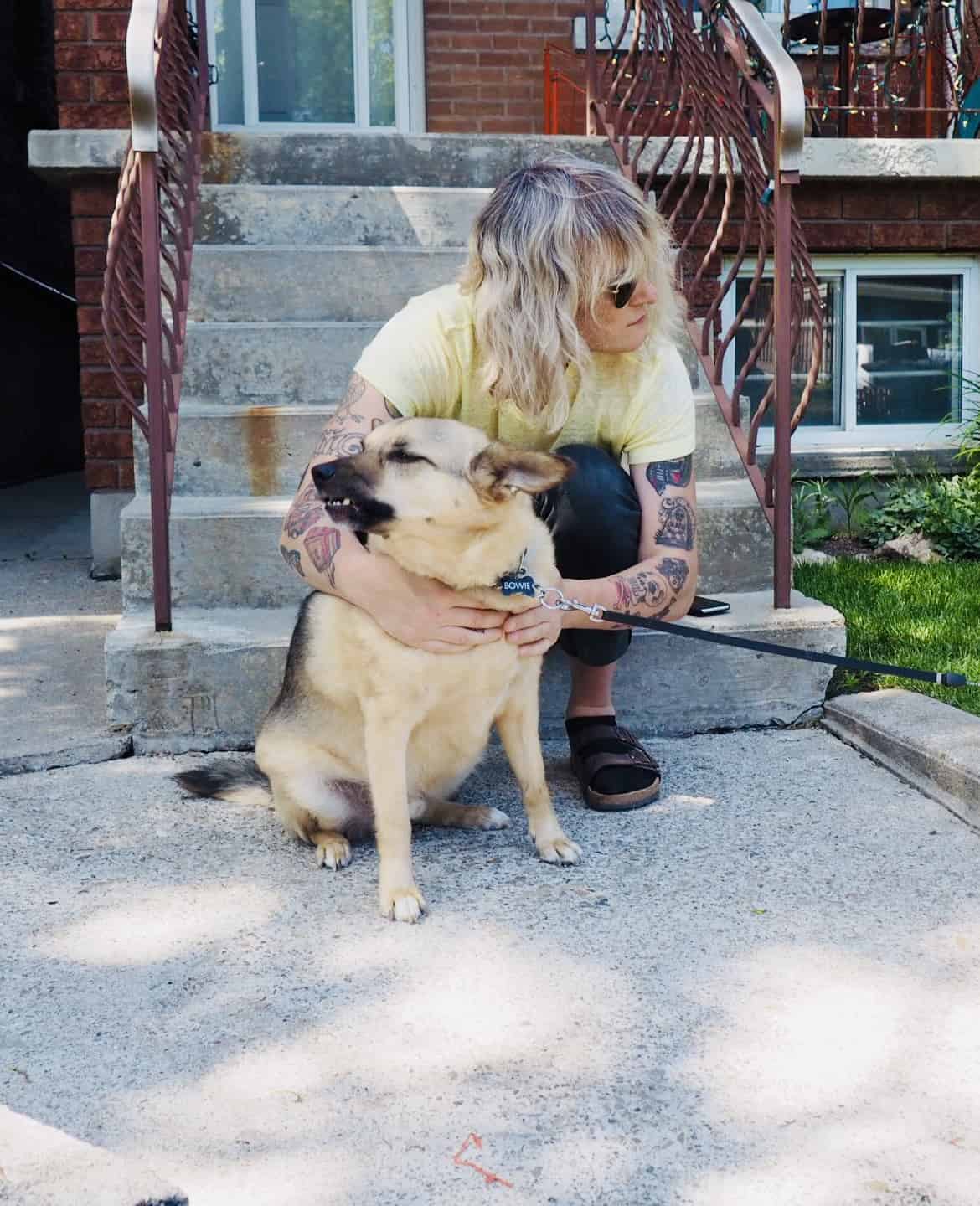 "I had forgotten how it feels to walk by someone and be thoroughly scanned by their eyes, watching them look at my face, down my chest and a careful glance at my crotch."
Life Stories

I had forgotten how the visibility of transness feels, laid so bare that strange men will yell things at me, to the amusement of their fellow passengers.

I’m an early riser, have been since I was young. I worked in construction for a long time.  As a construction worker, your body learns to make fine adjustments here and there and builds an immunity to sleeping in. I’m up before the crack of dawn when the streets are empty, as the day slowly dawns and we shake ourselves from our sheets. It’s the perfect time for my dog and I, intrepid explorers of the day unfettered by the hoards of people that find themselves on our streets in the daylight. A blissful existence if I’m being honest, one that was shaken a few weeks ago when a truck load of men on their way to work didn’t like seeing a lone trans woman walking her dog in the morning. Their windows rolled down as they hung deeply tanned arms out against the door, one flicked a lit cigarette at us and yelled “fucking tr*nny”, as they sped off.

Over the course of the pandemic, it had felt different on the streets. In the deepest and darkest days of lockdown, any excursion out of the house was an exercise in utility. We were rushing to the food store for food, or the drug store for drugs, with only the occasional dalliance to grab coffee at a distance or food through a window cut into a door. We’ve been surviving, and in the survival we cast aside all our preconceived notions and banded together, either by supporting the communities around us or minding our own businesses and leaving people alone. But now we’ve made it through the worst of it (hopefully), and all the anger and fear people have been holding onto needs an outlet.

This sort of man on the street harassment isn’t new to me. I’d been out as trans for a few years before the pandemic settled upon us and had lived through the jeers, stares and violence that often accompanies trans women on the streets. I’ve been physically assaulted before and I know the sting of a fist at the end of a fearful arm. But my feelings of unsafety had been put away, packed away in a box and stored for later days.  Now it feels as if those boxes are being dragged out and dusted off.

It started slowly at first, as we emerged back out into the world for reasons beyond immediate survival, I began to feel my identity policed once more by people on the sidewalks near my home. I had forgotten how it feels to walk by someone and be thoroughly scanned by their eyes, watching them look at my face, down my chest and a careful glance at my crotch. A cursory scan for any of the telltale signs of transed gender. I’m 6’2” with broad-ish shoulders, small breasts and long blonde hair. Those are features that could just as easily belong to any number of cis women but on me they’re bugs, not features.

Before the pandemic, it had felt like the neighbouring streets around me had come to terms with my trans body and were content to leave well enough alone, but something in the downtime has shaken the snowglobe and the particles have fallen in new places. On the street I feel brand new, as if I have gone through some new transformation in the time away. That equation doesn’t work in reverse, sadly. No one is policing cis peoples presence they way they do trans folks.

It strikes me too, that in the time we’ve spent away, locked in our homes consuming news and information at a rapid rate that trans women like me have been pushed ever deeper into a culture war. While we’ve been stuck in our homes baking bread and doing Yoga with Adrienne, we’ve also been consuming information about people without engaging with people. Being a trans woman in the world can often feel like being an object with no permanence, a discussion point without a tether to the humans that conversation bisects, and with our humanity removed we become something to speak about, hear about and perhaps, yell at.

A few days after the first incident, my dog and I were on our second walk of the day, walking the same streets and sidewalks that are familiar to us, and a car full of men drove by. You could feel the energy of day drinking radiating out of the car windows, a heat thick with Coors Light and unchecked aggression. A man leaned out the car window and whistled at me, another in the car yelled “I love you” to me. The car circled the block, eager to get another look at me, slowing down as they approached me head on. One of the men, torched by the sun like a lobster in its final hours, rolled down the window and yelled in disgust “that’s a fucking guy” and everyone in the car made fake vomiting sounds. A beer can flew out of the window and I pulled my dog out of the way to avoid him getting hit by a mostly empty silver bullet.

My personhood was removed, where once I was an object of desire now I was one of disgust. But always that, an object. The ability to be perceived as a person seemingly stripped away in the absence of time, replaced with a pillar of fear and derision, one that an increasingly hostile media will tell you is predatory, coming for your children and the sanctity of your homes and institutions. We are in your washrooms and change rooms, looming specters of the fear of an ever changing world. Or we’re just walking our dogs and minding our own and trying to reemerge into the same world you are.

The pandemic has removed so much from our lives, perhaps most glaring is the humanity we feel towards the people on our streets whose lives don’t reflect our own. I don’t yearn to come back into this world, where my back is always worried about what’s behind it. There’s another world out there, it’s one where the day dawns slowly off in the distance as we make our way up the sidewalk. The few neighbours we pass in their cars lift their fingers gently off the steering wheel in a solemn hello as we share a tired smile and move our muscles through our morning motions. I’ve seen this world, lived in it and walked it and felt no fear in my stomach at the sight of other people moving toward me, and all it takes to get back there is letting our anger and fear slip through our fingers without turning them into angry fists.

Niko Stratis is a freelance writer whose work has appeared in places like Xtra, Bitch, HuffPo Canada, THIS, Spin and more. Her writing tends to focus on issues pertaining to queer and trans people, something she as a queer trans woman is adequately qualified to do. She lives in Toronto, Ontario with her partner and their dog and cat. She is a cancer. Follow her on twitter @nikostratis.

"I had forgotten how it feels to walk by someone and be thoroughly scanned by their eyes, watching them look at my face, down my chest and a careful glance at my crotch."