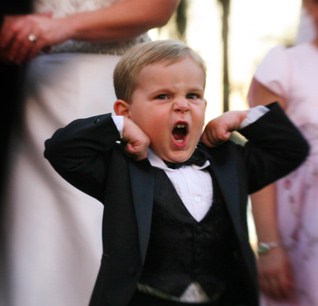 Ask a Child-Free Person: Is It Okay to Exclude Children from Attending Your Wedding?

So it’s the summer and we are in what wedding planners refer to as the heart of “wedding season.” To mark this occasion, I have decided to tackle one of the most awkward topics associated with planning a wedding celebration: Is it okay to exclude children from attending one’s nuptials? I for one fervently believe if it’s your wedding, you don’t have to invite anyone you don’t want to. This includes young humans.

Any time anyone has a party and pays for people’s food and booze, who they decide to invite is up to them. No one is owed an invitation to someone else’s wedding, no matter how recently they were born. I mean, just because someone knows and likes you, does that mean they have to invite all your relatives too? You wouldn’t expect them to invite your pervy Uncle Larry just because he’s related to you, would you? So, even if you were roommates in undergrad, and you held back their hair that one time they threw up a bunch of tequila shots when you were travelling in Malaysia, that doesn’t mean they have to allow you to bring a bunch of extra people to a party they’re throwing.

Listen parents, I’m still sympathetic to your situation. I get that babysitters are expensive, and when you’re already paying for a gift, stuff adds up; however, wedding costs add up for your hosts too. The wedding/industrial complex is admittedly out of control, and these days it can easily cost $100 a guest to have a wedding. If the host allows you to bring two children, that adds about $200 to the overall bill. And guess what? If one person is allowed to bring his or her kids, everyone else will expect to as well. Suddenly, thousands of dollars are being added to the cost of the wedding in question. Not only that, but there will be so many extra guests that the chosen venue may no longer be large enough to fit everyone. Inviting a bunch of extra people, no matter how young and tiny they are, can easily cause the price of a wedding to balloon.

Besides these financial considerations, the tone of the event is also a relevant concern. There are lots of places in our world where children aren’t allowed. For example, you can’t take your six year old to a nightclub or an R-rated movie. If someone wants to have a very adult wedding where everyone gets drunk and hooks up on the dance floor (this is the very sort of wedding I have always dreamed of having), having kids around could inhibit people’s ability to behave with debauched abandon. In such a case, it’s probably in everyone’s best interests that the kiddies stay at home for the day.

In the end, I know there are reasons you might want to bring your kids to a wedding, but there are also valid reasons your hosts might not want them there. In this case, what your hosts want trumps what you want. It’s their party, so it’s their choice. At the same time, I’m not saying parents should just suck it up and resign themselves to suffer. The people throwing the wedding should most certainly understand if people with kids have to give them less expensive/home-made gifts in order to compensate for the costs of childcare. The people getting married should also understand if parent guests can’t stay all night to dance up a storm. It’s very possible they may have to leave at 9 or 10 pm to relieve the babysitter instead of rocking out to Drake until the wee hours, and that’s okay.

In the end, I believe it’s the right of anyone who wants one to have a child-free wedding to do so. I will say, however, that if you chose to have one, the onus is on you to cut your parent guests some slack. There is no excuse for being an ungracious host.