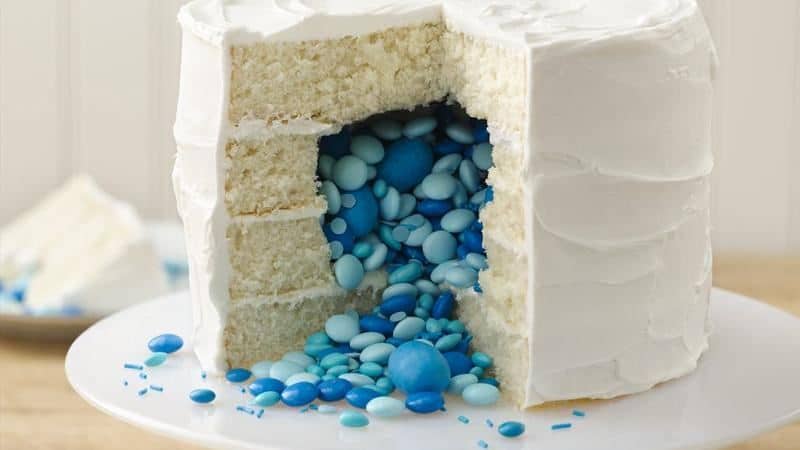 Ask A Child-Free Person: Should I Throw a Gender Reveal Party For My Fetus?

Today, gender reveal parties are about as popular with parents as ordering organic diapers from The Honest Company. So, what exactly are these fetes? First, they involve one or more people going for a sonogram, insisting the technician say nothing about what the fetus’ nether regions look like. Then the prospective parent(s) asks that the results be recorded for them to give to a baker. Then they take said sonogram results in a closed envelope to a baker. Said baker opens the envelope when the parent(s) leaves, sees the sex of the baby, then makes a cake which LOOKS like a normal vanilla or chocolate cake on the outside, but it’s NOT a normal cake, because when you cut into it, it’s either blue or pink. If your baby has a penis, it’s blue. If your baby has a mini vag, it’s pink. Yep, it’s all very binary.

So, maybe your friends have hosted a “gender reveal party,” or maybe your cousin or neighbours have, and now you’re wondering if you should have one, too? Well, I am here to answer that question for you. Oh, and just as a warning, for this column, I am putting away all diplomacy. I usually try to suppress my inner judgmental monster (admittedly not very well), but today I just can’t. When it comes to whether or not you should throw one of those parties, the answer is an emphatic NO! No, for all the reasons!

First, you shouldn’t have a gender reveal party because it’s not possible to reveal your future child’s gender at this point anyway. Gender is not binary and it does not correspond with the genitals you have in utero. Gender is a social construction that does not necessarily correspond to biological sex. All you get to see in an ultrasound is your baby’s genitals. That’s it. While those are often an indicator of sex, they tell you absolutely nothing about gender. Gender involves your relationship to concepts such as femininity and masculinity, and how you choose to perform them. Fetuses perform nothing, besides perhaps getting the hiccups in the womb. Fetuses are therefore genderless, so why the hell are you getting someone to food colour the insides of a cake as though it matters?

Secondly, do you really want to start thinking about gender in binary terms before your kid is born? You do not know your future baby’s gender, because that’s not something a technician can tell from a picture. Your baby has to tell you how they identify, and that’s when you’ll learn what your baby’s gender identity is. After your child has lived in the world for a while, if they adopt a gender identity for themselves and you want to have a party to celebrate their self-discovery, then go for it! But it’s a bit premature to do so when you’re five months pregnant.

It’s also entirely possible that when your kid sees pictures of the bloody gender reveal party you throw for them when they were the size of a melon, it might give them angst. If they are transgender or gender fluid, for example, it might cause them to internalize a lot of hatred. It could discourage them from coming out, as well, assuming that doing so would anger you. If you make yourself seem super invested in the idea that sex at a few months gestation equals gender, your future child may understandably develop some profound insecurities if they don’t follow that trajectory. Save everyone the pain and tears and just be a little less invested in the idea that you know anything at all about your future baby’s gender.

Thirdly, you should not have a gender reveal party because it’s sort of obnoxious to expect people to celebrate you and your baby that many times in short order. Don’t get me wrong, I am happy for people I know who have babies they want to have. I’m also happy for those babies when they have birthdays or reach other important milestones. Still, how many goddamn times can I be expected to take time out of my busy schedule to celebrate the same person who doesn’t even exist yet? If you’re planning on having a baby shower, it’s just too much. I’m happy you’re excited to be having a baby, but I need time left over in my life to go to work and re-watch The West Wing.

Fourthly, those gender reveal cakes look weird. They look like either a pink or a blue fluorescent highlighter exploded inside of them. That doesn’t look tasty. I LOVE cake more than I love Netflix and not having to wait in line for brunch, and yet even I do not find those confections appetizing. They are an affront to cake, and since cake is basically my deity, I find this profoundly sacrilegious.

In sum, I ultimately think gender reveal parties should be banished from the world. In this column, I usually take the view that few things are black and white. This, however, is not one of the grey areas. I do not think there is an okay or less offensive way to throw a “gender reveal party.” I dearly hope that fifty years from now, people will look back and consider gender reveal parties to be a nonsensical and short-lived trend, like voting for members of the Bush family or mini backpacks.