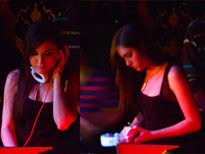 At the Drake Hotel Sasha Grey doesn't really DJ but Keanu Reeves does wear a blankie.

The girl can fuck, but can she DJ? It doesn’t really matter because indie porn-star/actress Sasha Grey did what she was supposed to do, pack the Drake Lounge on a Tuesday night. Girls were dancing on the bar, K-OS was sliding through the crowd and even Keanu Reeves showed up, although instead of joining the throngs of drunks, he was escorted by Drake staffers to the roof, and wrapped in a blankie for a nightcap. The scene was not nearly as tranquil downstairs. With most of the crowd having arrived at 10PM, what began as a fun night out escalated into hedonistic bedlam, when at 2am, she still hadn’t arrived. Killing time we decided to knock back several shots of Burt Reynolds – don’t ask what that was, ’cause we have no effing clue. Finally, Grey emerged at 2:45 and was ushered to the decks. Joy Division, Michael Jackson, Blondie – it was as if we were listening to a fickle iPod on the 401. Whatever. We liked her in Steven Soderbergh’s film The Girlfriend Experience and admire her rebellious bush.