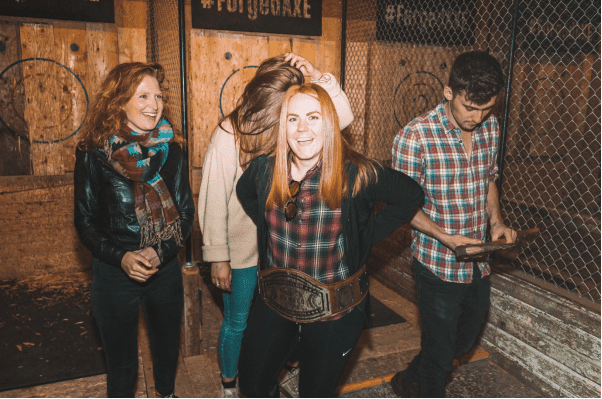 Why Should You Take Up Axe Throwing? Short Answer: IT’S AWESOME

Krista Mackie (from Forged Axe Throwing) recently represented Whistler at Canada’s National Axe Throwing Championships in Toronto She was one of a handful of women to compete. Axe throwing, she contends, has helped her keep fit, make friends, break down stereotypes and feel utterly empowered. And for those who crave competition, it may even be an Olympic sport one day.

We chatted with Krista to find out how she got her start, and why she thinks we need to get on board.

SDTC: What drew you to this sport?

KM: Honest answer: I wanted a second job, and my boyfriend sent me the job posting for a Host position at Forged Axe Throwing as a bit of a joke. Apparently I’m in charge of security if the zombie apocalypse happens. The first hatchet I ever threw was for my job interview! No pressure!

From that first experience, I fell in love with how powerful axe throwing is at getting people to step out of their comfort zone and try something new. I feel like I am a testament to that, because if I had never taken the chance on coming to a job interview, where I had no idea what I was in for, I wouldn’t be able to say that I pushed myself to the level of qualifying for the biggest tournament in the sport of axe throwing.

One of the biggest draws to the sport is knowing that the only thing that can stop you from competing and achieving at the top level is YOU. No excuses, no one else to blame or give credit to. At the end of the day, it’s all on you.

Can you describe what it was like for you the first time?

Nerve-racking! As I mentioned, the first axe I ever threw was for my job interview, and I was far from what you would call a “natural”; I always joke with our guests that no one will ever be worse than I was on my first day. I was definitely nervous, and it turned out to be a humbling experience, as I had expected to pick it up faster than I did.

It becomes almost more of a mental game sometimes, in that you can let this defeated attitude consume you and actually affect your physical ability to do the task at hand. I had to try to shake it off each time I dropped an axe on the floor, and I feel like that was an important part of the journey and something that made me a far better coach than I would have been if it had all come easy for me.

What is the secret to doing this well? How do you train?

I wouldn’t say that there is any secret to the sport. Passion, patience, and practice definitely go a long way and have been the three biggest factors in the improvement of my game. Immersing yourself in the sport is key. Every time you go to a tournament, you are exposing yourself to different throwers and different techniques that you can play around with. I even changed my axe after going to a tournament in Alberta and having another competitor let me try theirs.

As far as training goes, we keep our skills pretty sharp in our Monday night “Heavy Weight” league. Outside of that, I throw as often as I can, and working at an axe-throwing venue definitely helps with that. As we were preparing to go to the National Axe Throwing Championships, my co-worker and I got permission from our venue owners to stay a bit later to practice after the shop closed to the public, and that was a huge help. We were able to challenge each other to games and work on specific skills that we each needed to improve on. It’s always nice to have someone who can spot little parts of your technique that can be tweaked the tiniest bit to improve your game.

Why do you think axe throwing is especially rewarding for women?

I feel that axe throwing is particularly empowering to women because it is not something that most of us can say that we ever saw ourselves doing, and within a short time frame, you become capable of doing things you didn’t know were possible! For example, we regularly have guests come in, probably convinced to participate by a friend or partner, who are reluctant to even pick up an axe but by the end of our one hour session they are throwing two axes at once, or landing a trick shot, or hitting the bullseye with a confidence that you couldn’t have imagined.

Axe throwing is also a sport that is inclusive to all women, regardless of age, body type, or athletic ability. There is a sense of sisterhood in the sport and a community of women who are eager to celebrate each other’s accomplishments in a pursuit that can seem a little offbeat to the rest of the world.

At the competitive level, it is even more rewarding because there are absolutely no barriers between gender or skill level. Despite only throwing for thirteen months, I was in the same tournament bracket as men that had been throwing for over five years. It really adds something to your sense of accomplishment when you can say you were ranked among the top 192 throwers in the sport, and not the top 192 women (although that is still an amazing accomplishment).

Why should we try this?

Short answer: BECAUSE IT IS AWESOME! There is something so satisfying about opening yourself up to a new experience and discovering not only that you can do it, but that you can excel at it! Most people we encounter have never thrown an axe before, so we are all in the same boat for those first few swings, and as much as it does take a bit of skill, it’s not rocket science, and our coaches will have everyone sticking axes in the boards before they leave.

I am convinced that this is an activity for everyone and have personally taught people in wheelchairs or with other physical/mental disabilities, ten-year-old kids, eighty-year-old women and everyone in between. The one thing that they all have in common is this immense sense of personal pride in what they were able to accomplish with a little patience and determination.