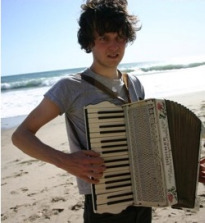 A ukelele, french horn, drums, bass, trumpets and an accordion—not your typical rock concert instrumental line-up. But this isn’t your typical rock concert; Beirut is the Balkan-influenced ensemble started in 2006 by a young American named Zach Condon. Two albums later, Gulag Orkestar (2006) and The Flying Club Cup (2007), Beirut released a double EP: March of the Zapotec/Holland. The album came out earlier this year, and after its release, Beirut took the show on the road.

The last time Beirut was in Toronto, they played The Danforth Music Hall on a tour for the release of The Flying Club Cup; the seated venue couldn’t contain the sold out crowd, who erupted from their seats and stormed the stage to join Beirut. There were no rock riffs to blame for making the crowd go crazy, just a trumpet solo! That was nearly two years ago, and on July 2, Beirut returned to Toronto to play the Phoenix, albeit with a much smaller line-up that only consisted of five other performers playing different instruments.

The opening band was The Dodos, whose line-up is as interesting as Beirut’s. The band originally started off as a duo with a guitarist and drummer, but expanded to include a xylophone player. The beginning was mellow with slower pieces and had the singer/guitarist changing his epiphone guitar midway for an acoustic guitar. Towards the end of the set pace became much quicker, and the audience was introduced to some of their new material.

“Scenic World” was Beirut’s start to the night, and the crowd cheered for Condon’s trumpet playing. The Balkan influence combined with Mexican wedding and funeral references is the core of the latest EP and evident in the song “The Shrew.” The accordion really shines in this song and it was obvious how much the accordionist loved the rock-star adoration from the crowd as he pounded and squeezed at the instrument.

Old favourites “Elephant Gun,” “Postcards,” and “Mount Wroclai” were all played and got the most response from the crowd. With all the cheers in between songs, a humble smile constantly creeps across Condon’s face. He invites everyone to sing along to “Sunday Smile” and the audience happily obliges.

As the night progressively got hotter due to the lack of ventilation, the comments got weirder. A marriage proposal or two were offered to Condon and there was even a request for a Michael Jackson song (Too soon? Too soon?). The encore included “Nantes” and the fabulously titled “My Night with the Prostitute from Marseille.”

Although the Beirut line-up was smaller and the crowd was more tame than the previous show, Beirut is still more than just your high school orchestra group– they’ve got a rock stance for a folk ensemble.