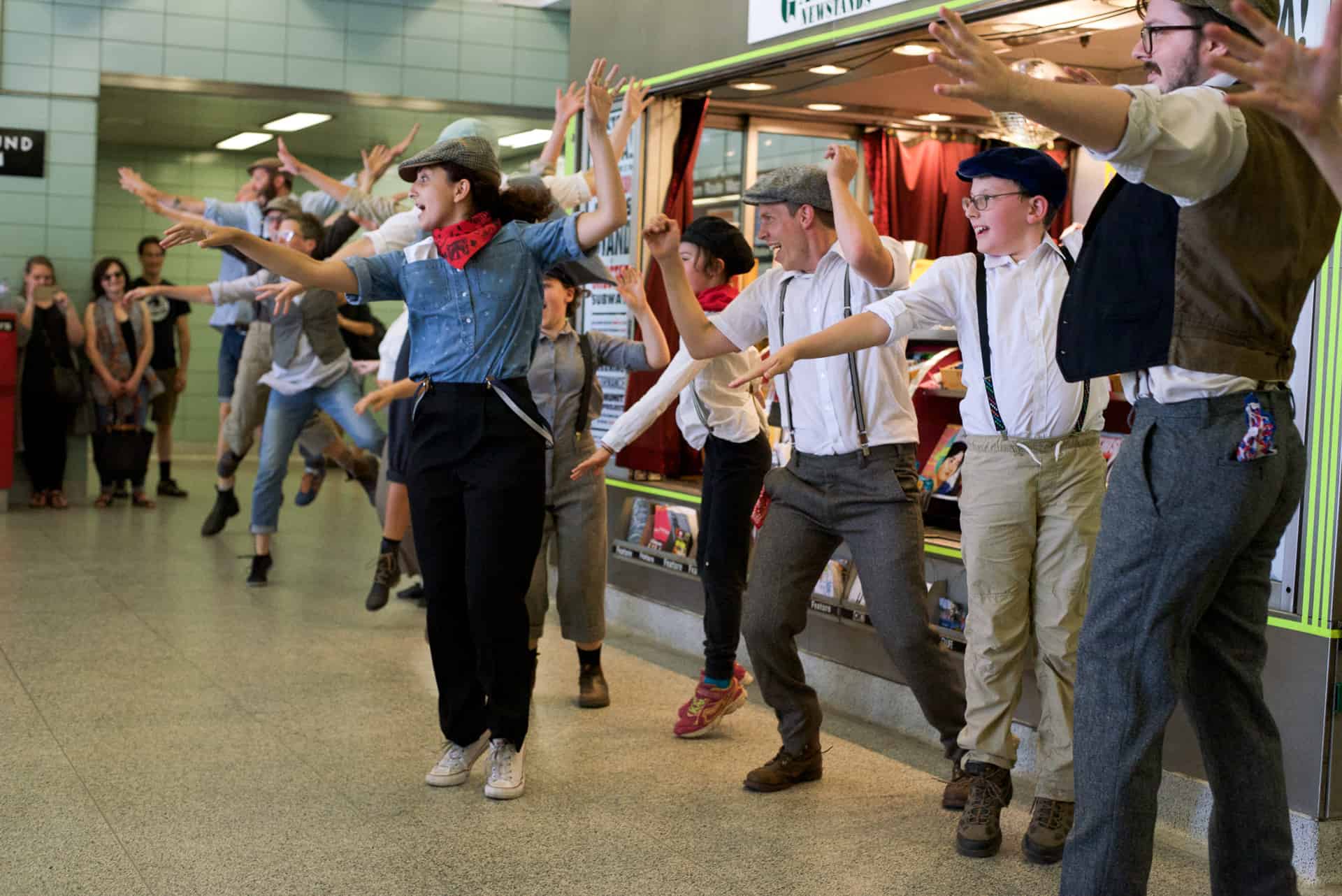 Posted on February 24, 2016
The Artists’ Newsstand has been operating out of a previously dormant newsstand at the Chester Subway Station for nearly a year now. The multidisciplinary arts space showcases the talent of local artists, writers and performers. This Thursday, commuters will experience celebratory live performances, music, art, prizes, balloons and cake as part of the Bloor Line’s 50th Birthday (at Chester Subway Station [street level], 22 Chester Avenue at Danforth).

We talked to award-winning theatre artist and playwright Moe Angelos (who has helped coordinate the daily operation of the newsstand throughout the project) about what to expect.

You’ve been co-operating the Artists’ Newsstand for almost a year now. What have you learned from this experience?

-A mirror ball + some good music brings joy.
-Commuters embrace unusual entertainment (print or live) on their journeys.
What has the response been like?

There are many smiles and nods of approval from homeward-bound commuters at the end of the day as they traipse through Chester. At the times when we have events, openings, performances, etc., travellers are more likely to stop and observe, usually with a generous and positive frame of mind. The public has been extremely receptive to the programming at the kiosk, especially from those who call Chester their home station. The kiosk had been dormant for something close to eight years so having it lively again revitalizes the civic space.

What has surprised you most throughout this process?
The tremendous number of details! Every little thing in there has to be sourced and arranged for sale. Though the newsstand is an artist space, running such a operation is double duty. And it is totally worth it to make the dream of bringing art into the transit system a reality. It is so gratifying to give schoolkids a bag of chips for a loonie or to let someone buy an artist multiple from the Magic Gumball Machine of Fate for a toonie!
How did you arrive at the lineup for the Bloor Line 50th Birthday Celebration? Is it weird planning a party for a train line?
Though unconventional for a birthday party, the lineup fell into place with ease. We knew we would have some kind of history overview of the Bloor Line and station and music is always a nice boost for people coming through, so DJ Nik was all aboard, as they say on the Go Train. Dainty Box is an amazing performer and the challenge of an all-ages burlesque for public transit is too good to pass up.
It’s not weird planning a birthday party for a train line because really the party is for all the people who work on and use the line every day.
What is in store in 2016?
We have other exciting events in the works before the newsstand ends on April 30: An AGO<>Kiosk swap for the AGO First Thursday on March 3, a Long Winter project on March 18, a Deaf Expressions performance cabaret on March 23 curated and MC-ed by Tamyka Bullen, a theatre performance by Anand Rajaram in mid-April – and our FINAL/CLOSING/PERFORMANCE/PARTY on April 28.
What is the best part about being a performance artist? Worst?
Being a performer is the best job in the world because it forces me to be very present and it is too easy for me to go through life without paying enough attention to the moment. The worst part is that it is too rare. Moe Angelos has written six plays with her collaborative theatre company The Five Lesbian Brothers, who have been published and won some awards. As a performer, she has appeared in the work of Carmelita Tropicana, Anne Bogart, Holly Hughes, Lois Weaver, Zack, Peg Healey, Dominique Dibbell, Lisa Kron, and The Ridiculous Theatrical Company, to name a few.