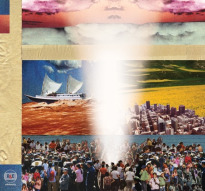 It’s been five long years since indie rock poster children Broken Social Scene released their last album, and we’ve been anxiously awaiting the follow-up ever since. Alas, the time has come, and just in time for backyard BBQs and long days at the beach, Forgiveness Rock Record has landed to make our summer great.

This time around, the ever-fluctuating group has been narrowed down to a core six – though, like always, they’ve brought along some of their famous friends for the ride including alumni Feist, Amy Millan and Emily Haines along with members of Pavement, Do Make Say Think, the Sea and Cake, and Tortoise.

Like the name says, this is most definitely a rock record. The guitar solos, catchy hooks and upbeat tempos are what outdoor concerts are made for – the end result creating something kind of epic. Think of Forgiveness as the more confident, rebellious older sister to the self-titled release of 2005.

BSS fans have been hearing the album opener “World Sick” for a few months now and like the rest of the tracks that follow, it’s an uplifting song disguised behind depressing titles. Like the opener, “Forced to Love” layers vocals overtop of wailing guitar riffs while “Chase Scene” would (like its name suggests) lend itself well to a cinematic pursuit.

Forgiveness is currently streaming for free on NPR, but you’ll want it in hard copy so plan a trip to the record store when it comes out May 4. In the meantime, take a listen here: http://www.npr.org/templates/story/story.php?storyId=125236515#playlist

P.S. If you haven’t already bought your tickets to the BSS/Pavement/Band of Horses show at the Toronto Island on June 19, DOOO IT!