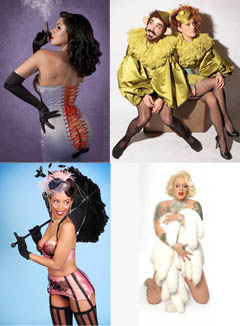 Burlesque Fest gives us a crash course on Canadianarama: John A. MacDonald, Trudeau, and tassles

It’s one of the coolest new-old art forms around. With its mix of saucy humour, art-house flair and sizzling in-your-face sensuality, burlesque is one hell of a time. So when the Toronto Burlesque Festival came to town, there was no doubt that line ups were long, seats were few and jaws were dropped.

Last Saturday, we got to experience a little bit of revisionist history as the Toronto Burlesque Festival took us on a raunchy ride through our nation’s proud history. A showcase of the best in burlesque, Canadiana-rama featured acts from Toronto, around the country, and from as far out as Japan.

The evening was also all about showcasing some serious burlesque royalty (move over, Duchess Kate) that included Toronto’s Coco Framboise and Tanya Cheex (founder of Skin Tight Outta Sight). We also got a glimpse of the current reigning queen of burlesque, Indigo Blue, as well as the first lady of burlesque, April March (she’s been performing since 1952).

MCing the show were our very own former prime ministers (but not actually), Pierre  Trudeau (joined by his lovely wife, Margaret) and John A. Macdonald, with mentions of peyote, John A’s alcoholism as well as a very charming retelling of “The Hockey Sweater” (let’s just say, we’ll never look at this beloved childhood story the same way again).

With fan dances, ballet and even silk acrobatics, it was clear that this show was about more than just skin. Among our favourites were a boylesque performer whose stage name was Evil Hate Monkey. With his twirled moustache, monkey ears and ballerina costume–it was totally one of those “WTF is going on–I can’t seem to look away—no, really, WTF IS GOING ON?!” moments that was a jarring welcome between more traditional sets.

Another performer to love was Obskyura. With her ice queen inspired set and graceful moves, it kind of made us really wish we travelled with our own personal human-powered wind machine.

Though every performance was a sensational showstopper, we really had to hand it to Roxi D’Lite. With her brassy, jungle inspired routine, she truly bridged the gap between old school and new school burlesque by keeping the bump-n-grind, but adding some amazing acrobatics to the mix.

The 12th Annual Burlesque Festival Returns for Four Sizzling Days, Starting July 18, and We Want To Send You!