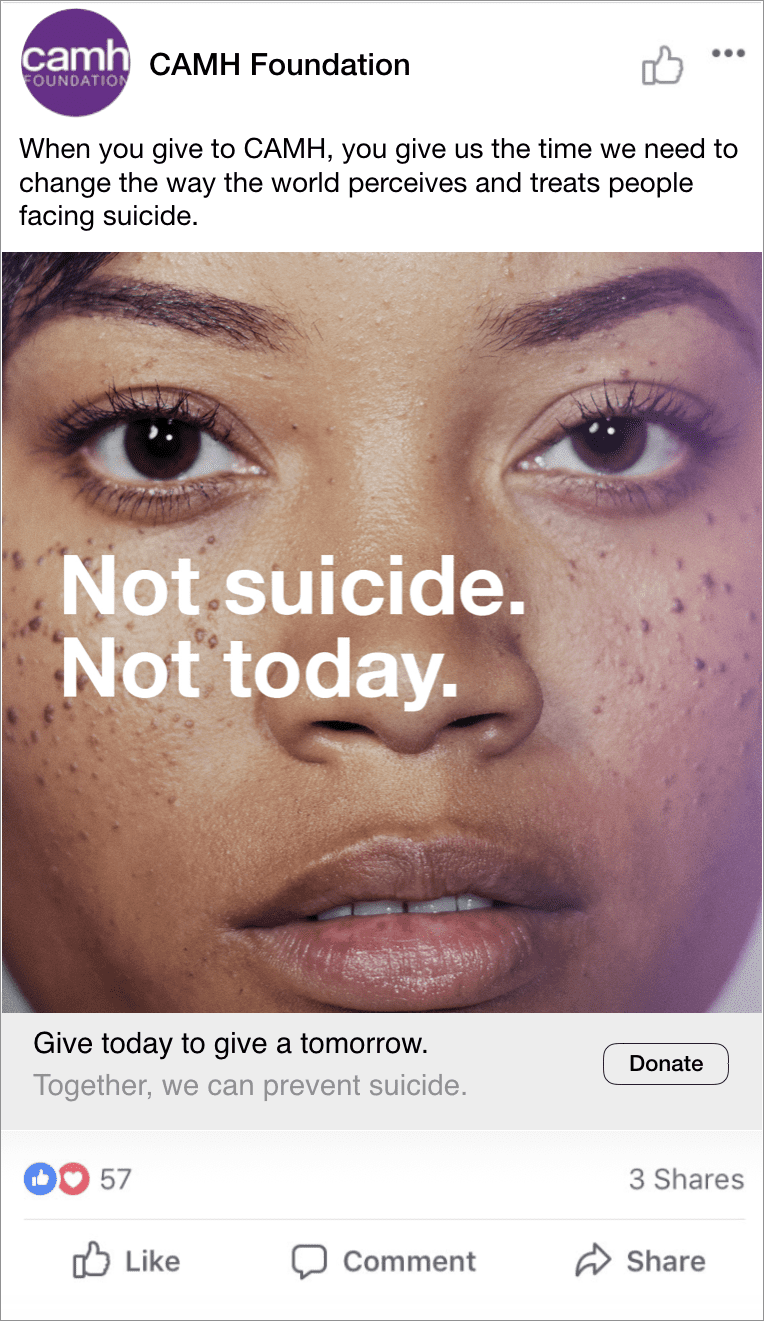 In Canada, 4000 people die by suicide every year. Today, coinciding with World Suicide Prevention Day, CAMH unveiled their bold new ‘Not Suicide, Not Today’ campaign, which was created to help prevent deaths by suicide, and also to help fight the stigma that can prevent those suffering with suicidal thoughts from getting the help they need.

Suicide is not something that most people are comfortable talking about, but like most things in life, the more we get comfortable discussing subject matter that intimidates or upsets us, the better understanding we will ultimately have.

“One of the things that suicidal thinking does is it robs us of our hope. It’s very difficult to see the light; it’s kind of like a black hole in that sense. One of the goals with the campaign is to shine a light of hope, shine a light of connection, and change the way we talk about suicide,” says Dr. Juveria Zaheer, a psychiatrist who works the Emergency Room at CAMH. “Rather than being something scary and mysterious, we can think of suicide as a tragic outcome for people who are suffering. We can think of suicidal thinking as something that affects one in twenty Canadians and we can think of ourselves as people who can stand together and say ‘Not today!’. If someone can stay alive for one more day, it gives us time to connect them with treatment that works.”

When celebrities die by suicide, one of the most common collective responses is “WHY?” And this is often followed by an assumption that someone was depressed. But Zaheer reminds us that suicide is far more complicated than that: “Historically, we’ve always linked depression to suicide because it’s a story that makes sense to us but it’s important to point out that suicide is an awful tragic end that can have lots of precipitants. We know that mental illness can increase someone’s risk of suicide. That can be things like Schizophrenia, PTSD, alcohol-use, opioid use, anxiety disorders, bipolar disorder, eating disorder, and suicidal thinking can also come when people are under tremendous stress – if they’ve had awful situations happen in their lives, or if they are not sleeping, or if they are feeling scared and alone.”

To prevent suicide, Zaheer believes its critical to understand people’s stories—to hold space and listen, “We need to understand biology and develop new psychotherapy treatments that work. We need to understand their cultural background and their history of trauma or oppression of inequality of social isolation. We need to consider all of these things to develop suicide prevention strategies that work. An important part of the picture is about treating mental illness and another part of the picture is about creating a world where people feel like their life is worth living, and that they have the supports they need to move forward.”
When someone confides that they are experiencing dark thoughts, it’s understandable to feel an urge to jump in with solutions, but Zaheer recommends that listening to them, and acknowledging their pain is paramount. There are plenty of resources available on the CAMH website, but to start with, here are two responses she recommends you start with:

1. I love you and we’re going to get through this together.

2. I see you, and I see how hard this is when you’re suffering.

Obviously, it’s not that easy—mental illness is complex—but if we can get someone to hold on, for just one day, we can get more time to connect them to the help they need, and try to convince them that people care, and it won’t always feel this way. “The illness can be so cruel that it tells us that we don’t matter, or that there are no solutions to our problems or that we are a burden,” says Zaheer. “But those things aren’t true.”