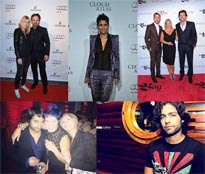 Celeb Rundown: Who was seen where on TIFF's opening weekend

Thursday: We spotted Adrien Grenier and his gorgeous blue eyes texting in the Underground at the Drake TIFF Overdrive party. What is he doing that he gets service down there?

Friday: The guests at our TIFF party at the Hoxton got a huge surprise when none other than Skrillex showed up and took over the decks for a surprise set.

Friday: Place Beyond the Pines pair Ryan Gosling and Eva Mendes were spotted snapping pics with Bonnie Brooks at The Bay for the movie’s in-store opening bash. (Have you seen the striped red carpet?)

Saturday: Audi hosted a party at Spice Route for sex addiction film Thanks for Sharing, and Mark Ruffalo was looking goooood in all black with a touch of grey in his beard (also, his wife is a total babe, no?)

Saturday: The Templar Hotel on Adelaide was taken over and renamed Target Hotel for TIFF, promoting the US department store’s move to Toronto this Spring. But that’s not all it was promoting! On Saturday night, Jian Ghomeshi celebrated the launch of his memoir 1982. The book begins with a fourteen year old Ghomeshi obsessed with David Bowie and shows how major music influences coloured his life. While Hollywood hung out at Soho House, Canadian celebs including Jeanne Beker, Steven and Chris and Strombo showed support at the Target branded rock’n roll book launch. Let’s DANCE…with Bullseye the Target dog. (We mingled and then crashed in room 603).

But without a doubt, Grey Goose Soho House saw the most exciting star action this weekend. Jennifer Lawrence and Kristen Stewart hung out (THE BEST), Ewan McGregor and Naomi Watts enjoyed food and drinks after the premiere of The Impossible. Harvey Weinstein muscled his way around the crowd and Gael Garcia Bernal charmed all with his irresistible smile. Emily Blunt and Kate Hudson also made late night appearances; who would you want to hang with more?

Did you have any fun star sightings? SHARE ‘EM!