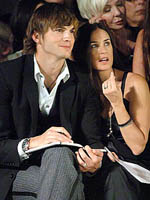 by Jen Houston
If you’ve been following Ashton Kutcher and Demi Moore’s tweets lately, you’ll know that hungry fans have been sending desperate messages to the celebs via the social networking phenom, begging for help in any way possible. This week, the concerned couple revealed plans to actually do something about the growing hunger crisis – an announcement that was met with avid enthusiasm by their tweeting fans.

Kutcher asked for Americans to participate in a hunger awareness campaign by creating videos about eating for a promotional reel via a video posted on Ustream Friday. By participating in the videos, and posting links to the cause on their social networking platforms, Ashton has faith that “together we can use this connective amazing tool that we have… to affect change in our everyday lives and in the lives of people [who] are struggling to eat.” He went on to say that “one in eight Americans will struggle to eat today, and I feel that it’s my responsibility as someone who isn’t suffering in the way that other people are with the economy, to actually make a change and make a difference.”

Bravo to Ashton and Demi for actually caring about real people, unlike fellow tweeting celeb Miley Cyrus, who with an audience of over 700,000 followers, has used the “connective amazing tool” to communicate such important issues as “going to sit at home and do absolutely nothing today” and “pllllleeeaasseee vote for me for the MTV Movie Awards!”

For instructions on how to make a difference, check out Ashton’s video.

One Day At A Time Part 1: Out Of The Ashes

Spotlight On Sistering: How To Help Women Experiencing Homelessness