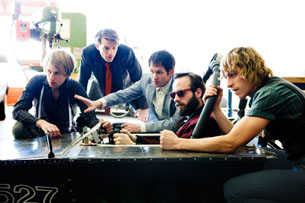 No greater bio could be written (by anyone, about anyone) than what currently exists on Sweet Thing’s myspace.  A must read.  Regardless, something by way of introduction is necessary, I suppose.  I chatted with Nick Rose over the telephone this week, pressing him with the usual list of goofy questions.  He was excellent about putting up with them and me – here’s what he has to say on behalf of the Toronto five-piece who appear to be having more fun than any of us, on a very regular basis. (Sweet Thing are: Owen Carrier, vocals, Alex Winter, guitar, Nick Rose, guitar, vocals, Tyler Kyte, drums, Morgan Waters, bass.)

Describe for me the best show you’ve ever played
The most exciting show we’ve played so far was on our most recent tour.  We played with Metric at an arena in Victoria, B.C.

What’s the absolute best reaction you could get to your music?
When people sing along that is an awesome thing.  We released in August, have gone across the country a few times, and we’re seeing more and more people knowing the words and having fun.  It’s all you need.  That’s as good as it gets.

If you could score a film, which film would you choose?  (Or… make one up).
I’m actually currently scoring a film by myself, called Unheralded.  It’s about a newspaper company in Lakefield, Ontario.  IRL, as they say (in real life).

The music in Avatar kind of sucked – as much as everyone likes to bash it now, it was pretty spectacular.  But maybe Sweet Thing could take a crack at the music.

Which five cities would you include in a fantasy tour?
So far we’ve only toured Canada so forget all those places ’cause we’ve been there (haha).  But we haven’t been to the East coast.

New York, Paris, London, Tokyo, and then we’ll see what that’s like.  We’ll pull back if it’s too overwhelming, and go to small-town Madagascar.

Where/what does your name come from?
It’s a Van Morrison song from Astral Weeks (1968)

How do you take your eggs?
Oh I’m very particular.  It’s a source of humour among the band.  I take them over easy, but I put them on my toast and cut the egg up, on the toast, methodically, neatly, and mannered.  It particularly annoys Morgan, our bass player.  But to be honest he does it like an idiot, dabbing things in the egg willy-nilly.  By the end the yolk is everywhere but in his mouth.

What is your favourite childhood television series?
Le Petit Prince, Belle and Sebastian, The Green Forest.  When I got older, The Simpsons religiously.

What’s your best concert(-going) experience?
I was blown away by the Dirty Projectors with Tuneyards, at the Opera House about a year ago.  She was amazing.  Blew me away.  Eye-opening.

Where is your favourite place to sing?
The shower sounds great.  Lots of natural reverb.  You sound like a million bucks in there.

You have $1000 and ten minutes to spend it.  What do you do?
Donate to charity, obviously.  To ten different charities.  And I get a minute where I get to go to each one and earnestly tell them that I’m donating.  Then I get to go home and feel really good about myself.

Sweet Thing’s debut album is available now on EMI Music Canada. It is currently available from iTunes for $7.99.