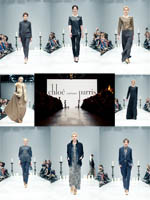 Chloe Comme Parris do Beautiful Badass the best way. And we yip-yip-want-want all of it.

Chloe and Parris Gordon, designers of Chloe Comme Parris, are extraordinary talented twenty-something sisters who wowed us, yet again, with what we grade a FUCK-YEAH! show. Like the Yip-Yip alien monsters on Sesame Street, we repeatedly chant-whispered this to our neighbouring fashion tweeps, “Want-want-want-want-love-love-love….uh huh….uh huh.”

Excitement for the Chloe Comme Parris show began a week prior, when we received a press release describing their FW 2012 collection as “Beautiful Badass.” Seeing as though this is the look we have been trying to nail since our teenage years, we were delighted to find out how our idea of style perfection would be done through the eyes and imagination of Chloe Comme Parris. Our version of “Beautiful Badass” hasn’t really matured since we decided it meant creating a sort of messy mash-up of Courtney Love and Liv Tyler circa 1996. Their “Beautiful Badass” interpretation is slightly more refined and was described in press release like this “…inspiration stems from Russain costume designer and fashion illustrator, Erte with further influence from exploration of the chic, effortless silhouettes of the 1920s.” Polished and pretty but with all the studs, chains and hardware we require to feel oh-so punk, tough and badass. Even if we aren’t. Sigh.

Hair was all messy milk braids, or as a backstage Redken stylist explained, “Schoolgirl who doesn’t care.” Translation: naughty rebel. With pale foundation and burgundy lips, the makeup had a tinge of goth, or maybe an ice princess/back from the dead feel. Whatever. It worked.
“This season our aim was to explore the dichotomy between delicate femininity and a hard, edgier aesthetic,” said designer Parris Gordon. “The resulting looks strike a balance between the two and define who we see as the ‘Chloé Comme Parris’ girl.”  Can we be that girl? PLEASE? We have been trying for years…

Find Chloe Comme Parris at your favourite independent boutiques including Rosedale’s beloved The Narwhal, Fawn, across from Trinity Bellwoods and Queen West’s Love of Mine.