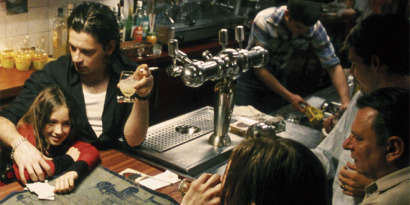 Cinemania is a festival that celebrates cultural diversity in a way that Montreal doesn’t explore very frequently: the quiet, if friendly, cultural differences between France and it’s petit cousin, le Québec. This facet of the festival is always couched by it’s main novelty: bringing French film, both imported and homegrown, to anglophone cinephiles. Essentially, disguises the differences between French and Canadian francophones. Standing in line however, this seems a pretty artificial distinction to make: most of the people behind me are speaking decidedly native-tongue French, though a few are flip-flopping back and forth in that comfortable Quebec way – you get so used to this after awhile that it becomes impossible to tell at a given moment what language people are speaking, though you know exactly what they’re saying. It’s a beautiful thing, but not without its complications.

Sunday night, director Eric Lavaine and writer Hector Cabello Reyes, (who is also responsible for the festival’s big closer Le Concert) were in attendance at their film Incognito’s Canadian premiere. Comedy is notoriously hard to translate, but Incognito held up relatively well under this pressure, sticking to good-natured absurdity and a healthy dose of physical humour, filling in the inadequacies of subtitles with body language. Starring a French singer (and non-actor) Incognito also made apparent the differences between French and Quebecois celebrity culture, and does so against a Parisian backdrop that constantly makes Montreal seem downright cute. Bénabar’s got a lot of charm, and does a great job in his first film, but his star power was totally lost on the Cinemania crowd, leaving Incognito in a bit of a cultural limbo. I left the screening feeling like I’d missed something during the experience, as if I’d seen one part of this film, but the real joke hadn’t quite set in yet. Maybe I should see in it Paris.

So the next day, on my way to one of the festival’s most highly anticipated films (Sylvie Verheyde’s autobiographical Stella), I was just a little apprehensive. I knew this film would draw Montreal’s real film lovers out of the woodwork, and as a new initiate to the local scene I was mostly worried about feeling out of the loop and underdressed. But who is at the Place Des Arts gates to meet me? Not trendy cinephiles or frazzled critics, but the familiar big messy face of a Quebec Libre protest. Ahhhh, ma ville. My sense of cultural belonging reinforced, I headed to Stella feeling confident that I at least understood what was going on, also safe in the knowledge that there would be no greater haven than the Theatre Imperial during that hubbub. Stella was absolutely phenomenal: you don’t have to be French to appreciate the break-out talent of Léora Barbara as the titulary 11-year-old precariously balanced between the upper-class world of her Parisian lycée, and the rough and tumble life led by her working class parents. Stella throws you into its protagonists’ crucial years without an ounce of sentimentality: Stella tells you the story herself, with the limited wisdom of a child on the brink of something much harder. Benjamin Biolay’s powerful and quiet performance as her father earned him a César nomination, and the film took Best Screenplay at the Flanders International Film Festival. Reminiscent of last year’s The Class, the film is predominantly shot in close handheld style, so our sense of entrapment is as visceral as Stella’s, without the false respite of establishing shots and perspective: in this way, the film treats its protagonist with the utmost respect and care, something its other characters either cannot, or don’t know how, to afford. At Stella’s heart is something that goes beyond the national, a violent kind of love that threatens to erupt at any time, firing wildly and without real hope that it will change anything.

And with this stuck in my throat, I step back out onto Bleury and smack into riot police, milling about quietly and dangerously: whatever happened here is over, and the street is deadly silent, but the feeling is left over. Soon emergency vehicles would flood the streets, police tape would go up, and crowds would gather. As it turns out, the Quebec Libre folk had been protesting, of all things, the Royal Couple. And so, on the same block, Stella took me to the damaged heart of Paris, England had lunch with Jean Charest to the sweet sounds of political uprising, and Montreal prepared for Wednesday’s memorial of Canada’s participation in WWII. Montréal, Quebec, France/Angleterre/Canada – I love you. Please don’t ever change.