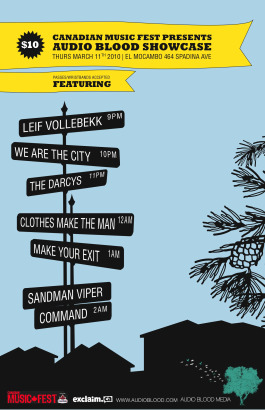 “Great stache, good leg – what more could you ask for?” slurs one Audioblood hipswinger, referring to the long-healed injury and impressive facial hair of MYE’s Mike Denby. And while the crowd was indeed well-mustachioed (cookie dusters from the likes of Dinosaur Bone’s Branko and a flock of Queen Street types were in full form) – there was a little more to the AudioBlood Showcase at the El Mocambo than well kept locks.

The lineup? Leif Vollebekk, We Are The City, The Darcys, Clothes Make The Man, Make Your Exit, Sandman Viper Command. But first, some opening notes – CMW is an endurance event. Not for the faint of heart, or feint of dance moves, to say the least. Commission a loving pal to make the dash across Spadina to Burger King for the burger special, however, and you’ve got yourself a date with the sagging black couch during set changes. Yusss.

And now the main event.

Tealights snug in their glass votives, and the red velvet curtains of the El Mocambo lit to their finest possible sheen, the AudioBlood Showcase was off to the races at 8:30pm, with Leif Vollebeck crooning to the black silhouettes of an ever-so-slightly swaying crowd. Harmonica and plucked notes climbing over one another as that slow, molasses voice ambled on. Mmmhmm.

Taking to the stage like something of souped-up hummingbird (not to mention a similarly- themed feather guitar strap) We Are The City got quite the move-clap-stomp out of the crowd, with some serious keys and sounds-like-synth guitar solos (that looked a little raunchy to the innocent observer – something along the lines of eating guitar strings…). To quote one audience member, “they killed it.” Indeed!

With a helicopter liftoff-style start to their set, The Darcys’ steady rhythms really got those knees a-wigglin. Chanting inhales, breathy yells, cymbal lines to put some oomph in that stomp. Feel-good never felt so good.

At this point it is worthy of note that the evening was indeed wearing on. Nothing a little CMW stretch can’t fix. A few tasteful lunges and washing-machine arm swings (à la grade two gym class) and we’re back in action.

Now along comes Clothes Make The Man, with a little snap-crackle-pop-rock (and a Neil Young-esque number thrown in for good measure).

And as Thursday turned into Friday, that ever-lovin’ band of brothers (not actually blood relatives) Make Your Exit busted out their best keys, guitars and SAXOPHONE. No matter how many times that sax comes out, the sound is always a most-welcome rarity. And if there is one thing to write about MYE, it’s that they love playing music together. Heaven-sent harmonies, jazzy bass riffs and keys enough to make your heart swell, ’twas a set of true love. More often than not facing one another, rather than the positively churning crowd, there was more than enough love to go around as the plaid-clad hopped onto the dance floor with relish.

And finishing off the night at 2am was Sandman Viper Command. Tearing through selected tunes from their album, with a couple extra tracks, those who stuck around were rewarded with (sore) throaty vocals that held onto their angst despite a cold, bass riffs to make you swoon and drum lines to get your body movin’. Again. At 3am. Impressive.

And as the crowd filtered out, past the bottles of 50 and crumbling arches of that good ol’ El Mo, there was a note of something special in the air. Disposable cameras flashed, plans for nurse-the-hangover brunches were made, and the sweat-soaked shirts of band members and audience members alike got wrapped up in hug after hug. Because CMW isn’t just a week of performance and mind-blowing music – it’s a family affair.

With love from Toronto,

Top Picks for Montreal Jazz Fest, Including Feist for Free, Rhye, A Tribe Called Red, She & Him and…Molly Ringwald?