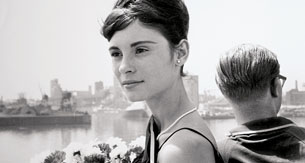 by Heidi Craig
In addition the usual scholarly presentations and conferences, this summer ConU will host a plethora of artsy events dubbed Branche: the Concordia Connection.

One such event is MontrealOnscreen, a collection of films about our city, curated by Concordia film studies prof Thomas Waugh and MA student Marcin Wisniewski, in conjunction with Cinema Politica. Twelve films, spanning seven decades of filmmaking (from 1934 to 2008), reflect the richness of our urban environment, its history, and the passions of its inhabitants. The films will be shown over five two-hour screenings at Concordia’s de Seve Cinema, and several directors will be in attendance to introduce their work and answer questions. Films include The Street, the 1976 short feature directed by Caroline Leaf, an award-winning animated adaptation of Mordecai Richler’s famous story of matriarchal melodrama in Mile End, as well as the 1991 feature Montréal vu par…, a love letter to the city for its 350th birthday, showcasing short films by some of the biggest names in Canadian cinema, such as Denys Arcand, Léa Pool and Atom Egoyan. Director Jacques Leduc will be present to field questions.

Screenings run nightly from May 29 until June 3, starting at 7:30pm.