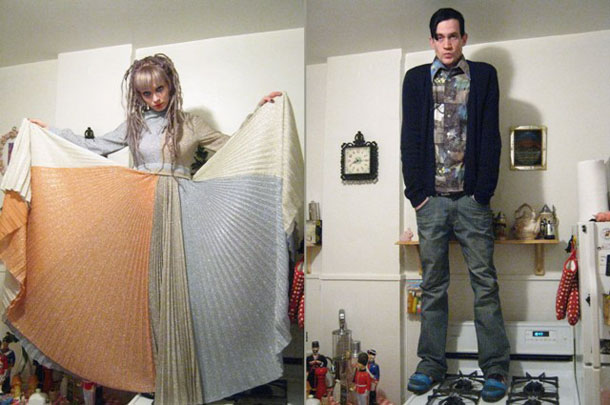 A unique couple with unique decorating tastes, Darrell and Aynsley have been collecting things for years from all over North America and Europe and religiously U-Haul them around, and set them up everywhere the wind takes them (8 moves in the past 5 years). Aynsley says it’s the only time she wishes they were minimalists, but surprisingly very little has been lost or broken along the way. Walking through the apartment is like a walk backwards in time. It’s a museum of the interesting, with macabre and classy elements all at the same time. Nature (antlers, wilderness landscapes, wood), vintage (everything, everywhere) and death (gas masks, skulls, guns, to name a few) themes stand out against white walls and soft lighting.

They don’t try to stick to one style per se, but if they like something and they can afford it, they’ll get it and make it work, and find a home for it later. Aynsley is a self described organizational nerd, so everything has its place and she likes to keep things clean and neat. One, because she wants it that way, and two, because if things weren’t organized they would be buried alive by all their odd collections. Dresses, dolls (or doll parts), old books, games and artifacts, old medical supplies, records, music equipment and war artifacts are among some of their collections. Possessions have been hoarded and carried around from England, Vancouver, Amsterdam, Berlin, Prague, Budapest, Croatia, France, and various other places in the United States and Canada. They got married on 06-06-06 on a graveyard in Saignon, France. The Mayor tried to bribe them to get married somewhere else for free, but they were like “No way, man!” and gladly paid him the 500 Euros. They do things their way, and they don’t really need anyone’s approval. It’s just who they are, and what they love.

Darrell and Aynsley’s  special message to friends and fans: “Friends are always welcome for a visit and a cocktail,  but if you’re thinking of breaking into our place to steal all our awesome stuff, please be advised that meat cleavers, saws and knives are hanging by the front door and we are not afraid to use them.”

1: They keep a beautiful scrap book of their life and marriage in a music book from Prague from the 1900’s. It only contains photos of the 2 of them, so even photos from places like New York City only have either Darrell or Aynsley in them.
2, 3,4: One of the bedrooms has been converted into Aynsley’s walk-in closet. Think Carrie Bradshaw meets Burning Man, with wall to wall racks and shelves filled with pretty dresses in every colour, dozens of shoes as well as bags, skirts, hats and shirts. Probably not too many pairs of pants. A sewing table with a pink bust decoupaged by Aynsley. This is a very fashion-focused couple and Darrell has quite the collection of clothes as well; every day in 2009 they took a photo of each others outfits and will be publishing a book of it sometime this year. The photo at the top is from that collection.

1: A gift from a friend from the Winnipeg Goodwill.
2: A Russian Engraving in a vintage gold frame.
3: Aynsley’s Vintage red lamp from Vancouver.
4: Lady tray from Value Village in Montreal, Aynsley drew the tattoos on.

Darrell’s music collection includes:  4 guitars, a mandolin, an autoharp, a cello, 3 amps, 20 keyboards, and counting. You can hear some from his latest project at Shame Agent (his solo stuff is at August Hell). Shame Agent is a collaboration with The Best front man Tai Lee, and it’s all recorded by the two of them using live instruments and samples in his music studio in the apartment. It’s pretty far out stuff. Any attempt to describe it will probably suffocate the origonality with silly words, so I suggest you give a listen and decide for yourself what it sounds like.

1: Aynsley likes to have a bit of Jesus and Elvis in every room, and the bathroom is no exception.
2: A friend from Ireland, Daire Lynch, painted this of them.
3: Waterfall and rainbow shower curtain from a department store.

1: Pink phone from a junk store in Montreal, and works, except the previous tenants kicked in the phone jacks at their place. Doll from east London, England.
2: Antlers were a Christmas present from Darrell to Aynsley; wood was a gift from a friend.
3: Another page in their scrapbook.

Spring into March with Pretty Pastels!

Street Meets Chic at Scrubs in the City Presents BLOCK PARTY. What will you wear?