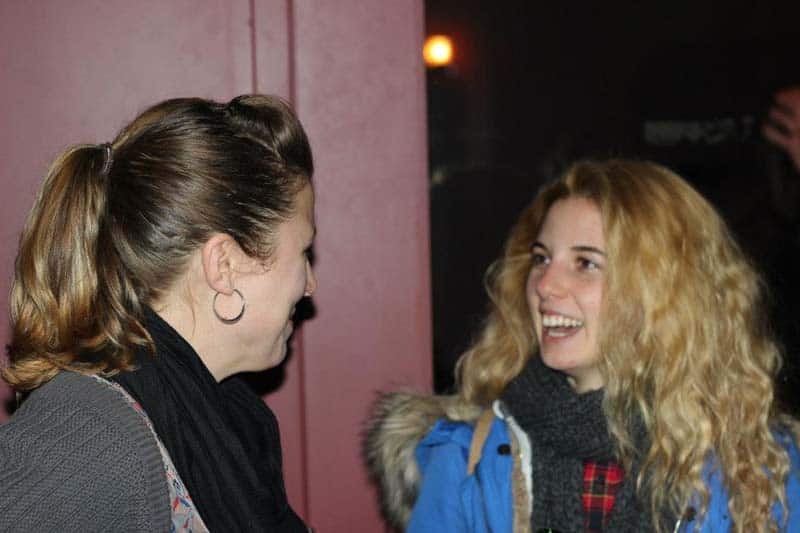 “What is the spectacle without the spectator?” – a philosopher, probably

Taking a twist on the typical Crowd Review this time around (the twist being that I was part of the show at Comedy Bar this past Friday, Feb. 1). Zoe Daniels and I performed in the Theatresports tournament under the guise of “Gamblin’ Women.” I was a spectator and a spectacle!* Weird! I’m going to review the crowd from my experience on stage? Is this meta? Are we still allowed to describe things as “meta”? Or has that word (like “random”) been shelved for a bit? It’s just a thing about a thing inside that thing?

All that weirdness aside, improv audiences are also very creative and supportive. From shouting out suggestions to scoring scenes to jumping up on stage to participate, the crowd influences the atmosphere of the show more than any other live performance. Most audiences are active, interested and willing to put in effort in order for the show to succeed. So when some of my scenes went wonky and weird and, “Ahh???”-ish, they were still supportive. They didn’t boo or heckle; they didn’t score the scenes super low (even though it’s okay, that last scene about a maybe fisherwoman and her freelancing typist roommate was definitely a level one rating, I know, it’s cool). They weren’t being dishonest—they were silent when things got messy, but they were engaged and ready to laugh and cheer when things went right(ish).

I spent the second half of the night as a crowd member and was able to join in the gut bust ensued. The crowd was really warmed up and ready for further participation. The best example of this was Primo’s “More” scene during which we were asked to yell out more of what we wanted to see. “More subtext!”, “More dramatic!”, and “More weddings!” had us all llol-ing (literally laughing out loud) but the final audience suggestion, “More make sense!” was accompanied by a huge a wave of laughter and brought the lights down. It was fantastic to see the performers and crowd working so closely together. And that’s the joy of improv: finding a perfect moment amid the chaos of spontaneous, collaborative creation.

*Not an egomaniac, I swear (although I do improv so maybe?). I would have reviewed another crowd at another event but my calendar was full. Because I am a very important, very fascinating person. Who works at a coffee shop on Saturday nights.