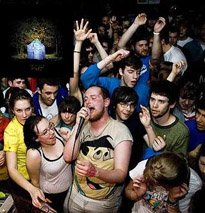 by Jen Houston
Dan Deacon will be bringing his insanely fun eclectopop to The DeLeon White Gallery on May 10th, part of a two-month tour in a bus that runs on used vegetable oil. An ensemble of fifteen additional musicians is accompanying him in his green wheels, recreating live the chaotic beauty of the new album, Bromst. As the troupe relies heavily on fan donations for fuel, Deacon’s MySpace claims that if you agree to bring five gallons of used oil, he’ll put you on the guest list. Audience participation is always mandatory, making the show as much about its attendees as its star. With such a progressive approach to entertaining, it’s appropriate that the Baltimore sensation is playing an art space rather than a traditional venue. “About a year ago, I bumped into Dan outside Lee’s Palace after the show he did,” says promoter Alex Coleurs, “I said, you belong in a gallery. A year later, I booked him – it had to happen.”

The Toronto date will be one of only two Canadian stops on the current North American tour; fans in Quebec can catch the set at Montreal’s La Sala Rossa on May 11th.