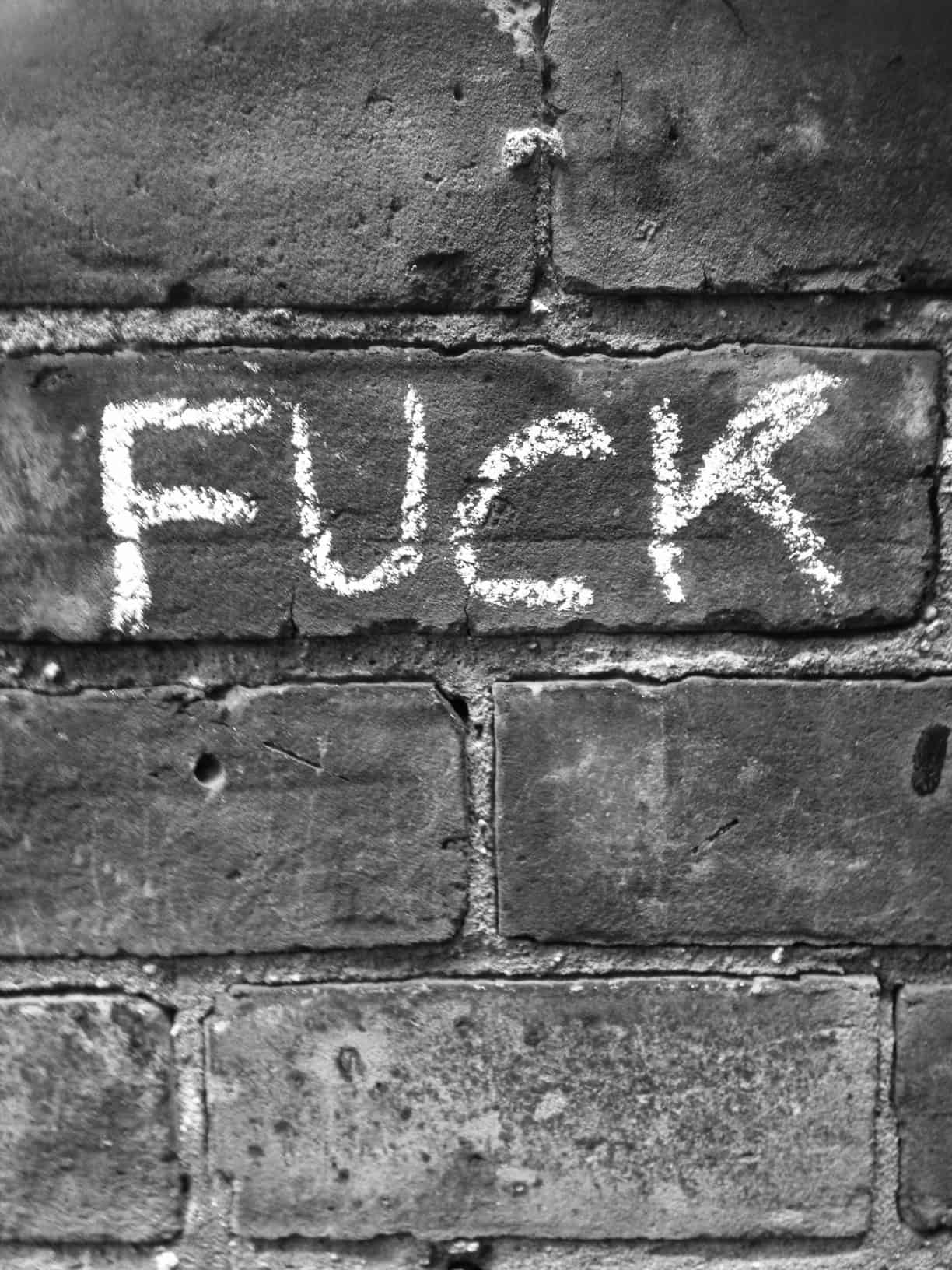 The Day I dropped the F-Bomb

When I was 6, I walked outside one day to see ‘FUCK’ written in chalk on the lamppost in front of our house.

Very solemnly, my mother took my hand and led me inside. She handed me a bowl of soapy water and a cloth, and together we scrubbed the lamppost clean.

“Why are we washing this away?” I asked.

“Because it’s a bad word,” she said. “The world shouldn’t have to see it.”

From that moment on, I believed those four letters to be taboo and I vowed never to say them aloud.

Not even when that boy in the third grade dared me to say it.

“I bet Leah’s never said the f-word,” he taunted on the school bus. I looked at the ground. “Say it!” he laughed.

“No,” I said, staring as hard as I possibly could at my shoelaces. “I don’t want to.”

That was the first time I cried myself to sleep because of a boy.

Time passed. I grew up, got new shoes and stopped staring at my laces. We went to school, the movies, the local Tim Horton’s, and a slew of other places where I couldn’t help but overhear people dropping F-bombs. At first it made me cringe. Then it made me laugh with the excitement of doing something you know you shouldn’t be doing.

It wasn’t until high school and the real popularity test began that I realized I would have to learn to love the f-word. “Mrs. X is so lame,” simply didn’t hold the same power as “Mrs. X is so fucking lame.” If you said that, people would nod and laugh. People would listen.

I tried to say it once. I was in the 11th grade taking a 12th year course, meaning everyone was automatically cooler and prettier than me and I needed to do something to not be the outcast in the corner. One day the opportunity arose.

“Hey, I saw you at that party on Friday,” the grade 12 boy in front of me said, turning around and offering up a smile. “Wasn’t it nuts?!”

I took a deep breath. Clenched my hands together. Flashed him a big smile and prepared a response of “it was fucking wild!”

But the words died on my lips.

He turned back around.

Even throughout University I never really embraced the f-bomb. I still felt there was enough language in my repertoire to properly express myself. But I’ve come to realize now that’s because I had less expressing to do. Until a few years ago, I really cared about being the nice girl. I couldn’t stand the thought of someone disliking me, and the idea of someone being mad at me? I could have puked at the idea. I would rather have flunked out of school and been banned the luxury of ever eating potato chips again then overhear anyone say anything remotely negative about me.

Then I graduated. I moved. I fended for myself in the big bad city. I started to become my own person and develop my own opinions and realized that I didn’t have to like everyone and everyone didn’t have to like me, and day would still turn to night if I expressed an opinion that ruffled a few feathers. I didn’t become rude and I didn’t become hard, I simply stopped being a pushover and became myself – and that’s when I realized I couldn’t give a fuck. There were simply too many other things to be happy about.

I didn’t actually like that restaurant my friend suggested, so I suggested another.

I ate two doughnuts in the gym waiting room.

I loved the movie everyone else deemed stupid.

I didn’t care if people judged me for seeing Les Mis three times in a row and then bawling alone on the streetcar after. I mean, I felt uncomfortable openly using old receipts in lieu of a Kleenex, but I got over it pretty quickly.

I simply didn’t give a fuck.

And it was beautiful. I was so in love with so many things in my life that I just couldn’t find the words to express it. So I turned to that word scrawled in chalk on my lamppost those many, many moons ago. It no longer felt negative – it simply felt freeing.

It’s now fully integrated into my daily vocabulary. It’s hard to stop. And sometimes sure, it feels borderline unnecessary, but more than anything it feels fucking beautiful.

Leah Ruehlicke lives in a teeny tiny apartment downtown Toronto with bad water pressure and an amazing book collection.  Read more from her on Twitter.