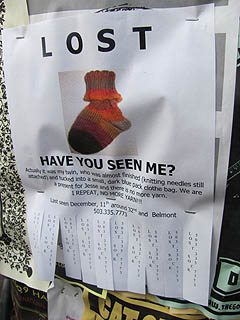 Lost sock at 32nd and Belmont

The last day, the longest day.

LOST! HAVE YOU SEEN ME? Actually, it was my twin, who was almost finished (knitting needles still attached) and tucked into a small, dark blue pack clothe bag. We are a present for Jesse and there is no more yarn. I REPEAT, NO MORE YARN!!!!”

-sign on a telephone pole at 32nd and Belmont, Portland

We wake up, and after making us scrambled eggs with corn tortillas mixed in, Lee walks us through one of Portland’s many parks to one of Portland’s many Stumptowns, in Belmont-adjacent to an old-time arcade, a sun-drenched porch with a lone can of PBR on the railing, and an adorable blonde boy petting a giant dog. Portland, once again, exactly what it’s supposed to be. After slurping rich coffee and inhaling buttery croissants, we walk back through the neighbourhoods, ducking prayer flags, to pack up our stuff and get ready to say goodbye to both our American compatriots and America itself. We leave Lee with the sunshine, frost, a hungover roommate and a stray cat, and drive Joanna to the Portland airport. After sifting through ten thousand pounds of roadtrip garbage in my car to extricate her stuff, we exchange glum hugs and head north.

We are determined to make it to Vancouver. Nothing will stand in our way. We stop for coffee at the free coffee stands in Washington. We eat a delicious American meal alongside grinning seniors in Everett, Washington. We listen to a lot of Leonard Cohen. We almost die on winding mountain roads in a white-out snowstorm. But we make it. After purchasing tall cans of Budweiser mixed with Chelada and some sippin’ whiskey, we triumphantly cross back into Canada and make ready to test my ex-pat knowledge of Vancouver geography. We’re served home-made sushi by friendly pajama-clad faces in the West End, and spend an hour in an underground car park cleaning out the car. We visit cozy apartments with Christmas trees and catch up on two years worth of West Coast news. Eventually, a motley crew makes its way to The Cambie, because where else are you going to get beers after midnight on a Sunday? After rolling a joint for an angry tourist, we drink cheap beers and try to adjust back to Northern climes. As we drive home on the post-last-call Vancouver streets, I point out mountain vistas you can’t see because it’s dark, and reminisce exhaustively. Vanessa offers ginger hummus and a UBC campus room to crash in, and we curl up on couches and seperate ends of twin beds in borrowed pajamas, hoping we’ll wake up in time for the planes and car-exhanges that will be the end of our Great American Odyssey.

Beers at The Cambie