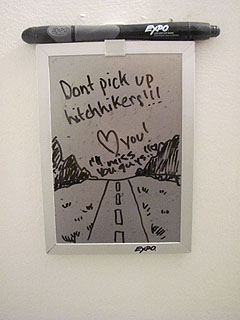 Farewell advice from my roomies

When we first crossed the border, a clerk at the Wilson Farms convenience store who looked suspiciously like Common found out we were from Toronto, and, while we purchased hot cashews, asked what we were doing in March for Steak and Sex Day. “It’s the male antidote to Valentine’s! My friend lives up there, she invited me!” He grinned.

An hour later, eating our dinner during a downpour beside Lake Erie, in the friendliest restaurant in the known universe, we reflect on the lessons we’ve learned so far in our journey-which has taken us from my walk up apartment on College St. in Toronto, through Niagara Falls, to Hamburg, NY. Hoak’s Restaurant is exactly where I would spend my Christmas if I was for some reason alone in Christmas in New York State. There’s a fake fireplace, a mirror frosted with Irish sayings, and a terrifying wooden fisherman statue the size of a bear in the front entrance. The fish fry Paul is eating is twice the size of his head, but the roquefort dressing is homemade and delicious.

We can’t decide between driving to Pittsburgh or driving to Akron, and we decide to flip a coin when we get to the fork in the road. 5 miles before this happens, Paul decides he wants to wake up in Akron. So we do.

This morning we eat breakfast at Akron Family Restaurant (!!!), and there is a disappointing lack of psychedelic spontaneity, but good eggs.  We wander around the Akron Art Museum – a retrospective of Chuck Close portraits, and a painted vignette of John Brown’s fight against slavery by Jacob Lawrence-win. Weird modern art that looks like it belongs in the kind of boutique populated with maribou feathers-fail. But the architecture of the building is amazing. We are currently sipping unbelievably rich coffee at Mocha Maiden, and debating if we can make it to New Orleans. But first, West Virginia Mystery Hole. (dirty.)

-Austere romanticism is a happy place to be.
-The people sleeping above you in the Courtesy Inn aren’t going to murder you (your instincts are wrong.)
-The fish is always bigger than you think.
-There are a lot of diners with vaguely European decorations where you can spend your Christmas listening to Lite FM carols and the Beatles, and the waitress will be nicer to you than your own mother.