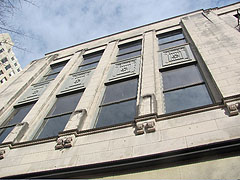 Going back in time in Birmingham

In which we walk streets paved with history and Kid Cudi and tiny pizza saves the day.

After waking up in the Christmas tree lot, we mash south again to Birmingham, Alabama, to check out the Birmingham Civil Rights Institute. Birmingham looks a lot like the classic picture of a Southern town-whimsical stone buildings in soothing washed out colours, lots of wrought iron, wide streets and people saying good morning in soothing Southern lilts. BRIEF HISTORICAL INTERLUDE: During the Civil Rights movement in the sixties, Birmingham boiled over with racial tension; the sight of hangings, cross burnings, and deep rooted segregation that a dedicated black community fought to eradicate. Culminating in a season of violent bombings, the most notorious of which led to the deaths of four young black girls sitting in Sunday School, Birmingham became known as ‘Bombingham,’ and the city’s civil rights activists became an example of strength for the rest of the country. Ah, learnin’ stuff. Birmingham is definitely worth a stop for this state-of-the-art museum, and the beautiful adjacent park with a freedom walk populated by statues capturing the movement.

And now we’re driving through Mississippi. And it’s snowing. I’ve been wearing moccasins since Akron assuming at some point the south is going to feel Southern. A woman laughed at me in Target today when I asked if they were still selling bathing suits (which I wanted to wear while wrestling alligators in a bayou, naturally.) This turn of events is extremely disappointing. So are the cheese fries we just ate. Update-when you order anything with cheese in America, (especially from a truck stop with 2-day old potato salad congealing in a tin pan next to your table), that means smothered in nacho sauce. I’ve seen this happen with macaroni, and it’s not something you soon forget. Tread carefully.

The destination tonight is an apartment in New Orleans where lovely Californian expats will be making their own ice cream, but I’m beginning to worry that all that waits for us is a deluge and (hopefully) a cozy hostel bed. The atmosphere could shift in 100 miles, couldn’t it? Oh well, until then we have Coeur du Pirate and a Kid Cudi album obtained in lieu of a bathing suit to convince us that forward momentum is still a good idea.

The Freedom Walk in Birmingham, Alabama

Paul and his Canon-unbeatable duo