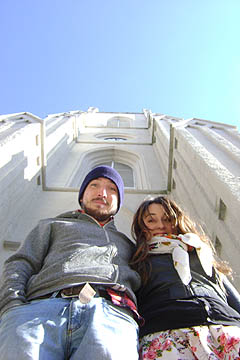 Nerds outside a church in the French Quarter

In which we make friends, wear masks, and touch the Mighty Mississippi

We get to New Orleans at midnight, and are checked into the St. Charles Guesthouse in the Garden District by a gentle old man who leads us down cozy corridors covered in framed, fading photos of Fitzgerald-era women in pin curls, little boys in sailor suits, and dashing gentlemen with skinny moustaches, to a tiny room with a gas heater feebling pumping hot air from the bathroom. The colours are faded pinks and greens and surreal oranges, all of it looks the way I remember my grandma’s house when I was five. This is a great place to stay if you want to instantly feel transported by that weird cosmic thing New Orleans does to people. Two things are immediately clear: we need beer, and we need gumbo. Like, right now.

While Paul’s blood sugar plunges to near-murderous levels, we make a pleasant discovery-there is a lot of shit in New Orleans that’s open 24 hours. We sit down at St. Charles Tavern and the tattooed waitress brings over a steaming plate of gumbo overflowing with crab’s legs. While we eat, we ask her where we should go for a beer at 1 am on a Friday in New Orleans. She points us in the direction of Flanagan’s in the French Quarter, describing it as the type of place locals go to grab a beer.  Also 24 hours. When we walk in, it’s clear that everyone in the bar knows each other, and most of them have probably slept together. Our jolly bartender pours us pints of Blue Moon with slices of orange, and we sit on rickety stools behind the black square bar. A pitbull lounges near a group of bearded power-drinkers at a table behind us, and they have the Planet Earth boxed set behind the bar. All things told, I should probably move to New Orleans. Decorated with stickers, including one that says “Forget Iraq, Rebuild New Orleans,” this is obviously a spot with a lot of local pride. Our bartender explains the city, post-Katrina-the second mention of the hurricane in as many hours. The tangibility of its effect on the city is startling. “The city was something like 1.1 million, and it’s down to 400,000,” he said. “It basically boiled the city down to its elements-you’ve got the good and the bad left, and taken out all the filler.”

He produces a map of the French Quarter and blacks out everywhere we can’t walk at night with a ballpoint pen-pointing out the good with the bad, emphasizing the most beautiful bits but warning us to keep our guard up. As we settle up the bill and watch the regulars go home together, he gives us a grin and tells us to be safe and have a great time. This is still one of the coolest places on earth-almost cooler for its pride and resiliency. New Orleans isn’t sweeping Katrina under the rug-and that’s all the more reason to go and explore it.

The next day, we don’t wake up in time for free continental breakfast. We try to take the streetcar to the French Quarter, and we’ve been sitting on it five seconds when it gives a mechanical heave. The driver at the front looks down at his control board and sighs. “My bad.” So we walk along the tracks to the French Quarter, circling the giant monument of Robert E. Lee. An older punk guy in a beaten-up leather jacket  lounges on the base of the statue, while his kids chase each other around. “Where y’all from?” he shouts. When we tell him Canada, he grinned. “Great place! You used to have a cool Prime Minister!” “Not any more!,” we shouted back. He laughed and nodded enthusiastically. We find coffee and bagels and sit in the sun reading the New Orleans underground newspapers-of which there are several, with the best record reviews you’ll ever read. Then we spend the day wandering around the French Quarter, admiring the intricate and whimsical architecture thick with hanging vines, perfumed flowers, and framed by giant palms and gnarled oaks. You can wander down beautiful little alleyways and find four star restaurants tucked next to organic hippie places serving fennel chowder with broiled clams and absinthe, which you can slurp along with bottles of Lazy Magnolia Southern Pecan Ale. A woman named Gloria read my tarot cards and we poked around the French Market. We bought fedoras and feathered masks, and sat by the Mississippi while the sun set. As the air got chilly, we took the streetcars back to our hotel, grabbed steaming hot gorgonzola pizza from Slice, (FREE STICKERS!) and hit the road. At which point we get pulled over by a Texan police officer and it turns out I left my driver’s license in Ontario. Oops. Time for Waffle House.

Wandering around too-fancy antique shops in the French Quarter

Gloria, who read my tarot cards

Sunset on the Mississippi