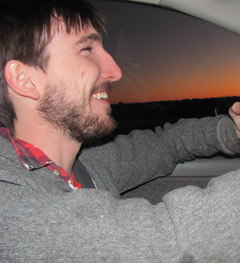 After sleeping in the parking lot of an executive business park in a suburb of Austin, we dragged our weary selves to a Starbucks bathroom to clean up. While Paul brushed his teeth, I ordered a mocha and the Canadian dollars still left in my wallet spilled on the counter. “Nooo!” the barista said, smiling behind thick black plastic glasses. “Y’all are from Canada? Where?” It turns out she grew up in North York, and this coincidence resulted in an upgrade to a grande and significantly less hostility in the accusatory glances of her co-workers for my hobo-style bathroom bathing. It’s raining when we get to South Congress in Austin, so we can’t enjoy breakfast on the patio at Jo’s. Instead, we walk to Woodland Cafe, where every waitress looks like a character in a French interpretation of a cowboy film, for delicious eggs. This little stretch is a goldmine of vintage wonders, whether you’re looking for home furnishings or a new (old) leather jacket. The serious vintage mecca is Uncommon Objects . This sprawling space filled with curated delights is a wet dream of random oddities-each nook of the store is jammed to the rafters with a thousand cool obscurities, all co-ordinated in museum-like random galleries around the store. We pick up some vintage postcards, a Turkish coffee pot, an old camera bag complete with Kodak lens cleaning papers, and have to leave before we’re unable to resist the dusty old books, bizarre signage, delicate old pharmaceutical objects, and giant carnie shoes. A wander down South Congress will put a serious dent in your wallet, and this is the place to come if you’ve been craving a perfectly distressed leather jacket with puff shoulders and an assymetrical zipper, some sequins, or an awesome pair of cowboy kicks. Make sure to stray off the main road and into the alleys to find the record stores hiding there, and be bold and take a quick peek around the Hotel San Jose. Just make sure not to lounge on an inviting white chaise when the room owners are strolling back from brunch. (cough.)

And now, we drive. And drive. And drive and drive and get out of the car at a cliff by the side of the highway and a cactus stabs through my moccasin and Paul’s plaid shirt almost goes flying off the roof of the car and we drive some more and pull in to a farmhouse with a swingset claiming to be a Mexican restaurant where a nice lady carrying a bucket informs us they aren’t open on Sundays, and we watch the sunset in an RV park behind a motel where a man is tinkering with a falling-apart turquoise T-bird. After dark, we lie on the hood of the car beside a deserted highway outside what we think is El Paso (it isn’t) and huddle under Mexican blankets staring at the stars and listening to the absolute silence. We drive an hour in the wrong direction before Paul makes us pull over to look at a dead armadillo (lump of grass) and we realize we’re going the wrong way. We turn around and drive through snow-covered sand dunes, debating for the two hours to El Paso whether it could seriously be snowing in the desert. We eat some 1 am What  A Burger and pull into a gas station (Christmas Market on Sundays!) outside the air force base to sleep. When we wake up, there’s frost on the windows.

Hotel San Jose in Austin-where the other half lives (not in cars.)

Sunset by the highway in Texas