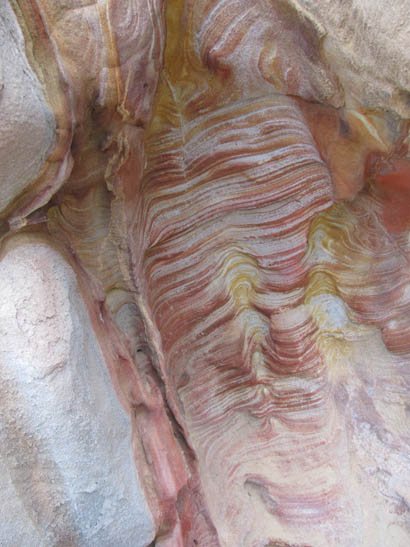 In which we drive the 101, eat pea soup, and watch Jo saves lives.

For the first time in the history of the trip, I wake up before Paul. I make a freezing dash from the car to rouse him from the tent (slightly terrified that he’s frozen to death) and we pack up camp and head out of the park. We stop for coffee in Twentynine Palms (Hi Robert Plant!) and for the first time, the air smells like the West Coast. Sufficiently caffeinated, we drive through stretches of wind farms back into strip-mall civilization. We make it through L.A. gridlock onto the 101, and all of a sudden we’re driving along the edge of the ocean. We stop in the tiny seaside town of La Conchita (population-less than 400, and a place so beautiful they’re sticking around despite constant threat of epic landslides) to watch the waves, and do a u-turn to buy lunch from a tiny market stand. A local slices open a giant, ripe avocado and tells us to stick our faces in, and the old man who owns the stand smiles from behind thick glasses and pours extra strawberries into my basket with giant gnarled hands. We drive into the sunset in the California hills, stopping for dinner in Buellton at Andersen’s Pea Soup, where the bowls are bottomless and the milkshakes are extra thick. After slurping our soup we continue up the coast to Santa Cruz. We get to Joanna’s house just in time to eat Mexican, drink Great White and meet her roommate before he headed off to Baja California to go surfing (he made it halfway to the highway before turning around for the bag of contingency tacos). After showering (SHOWERING!) we bundled up and rode bikes down to Seabright Beach, where someone had left a fire smoldering in one of the oil cans. We drank cans of PBR and watched the waves until we were freezing, then huddled by the fire to warm up for the bike ride back home.

The next morning, we decide to have a Santa Cruz day. We eat breakfast at The Bagelry, then Paul takes off on a bike for the east side and Jo and I drive through light rain up to Panthers beach, where waves are crashing epically against the bright orange rocks. We scramble down footholds in the cliffs, and Jo and I are walking down the wet sand when we look up to see a barefoot dude 40 feet up, hanging on like Spiderman. We’ve been watching him for about 3 seconds before he loses grip and plummets to the sand. These are days when it’s good to be staying with a girl who’s an EMT. Jo races to the scene, authorities are contacted, the idea of a helicopter is dismissed, and the guy heads to the hospital, while a dozen friendly EMTs, volunteer firemen, and a Peace Officer assure us  and his freaked-out friends that he’ll be fine. We stand in the wake of the madness for a second then walk to the edge of the cliffs to watch the waves get bigger and bigger as the tide comes in.

After heading home and picking up seriously delicious foodstuffs at Staff of Life Natural Foods Market, we start to pack for our all night drive up the 101 to the Redwood trees. Paul and I grab some last-minute tacos (his fourth so far that day), and with everything jammed into the car, we drive into the night. No sleep til Redwoods! We pass out in a gas station parking lot sometime past three, after winding our way through the Avenue of the Giants, insane twisting roads surrounded on either side by trees wider than my car.