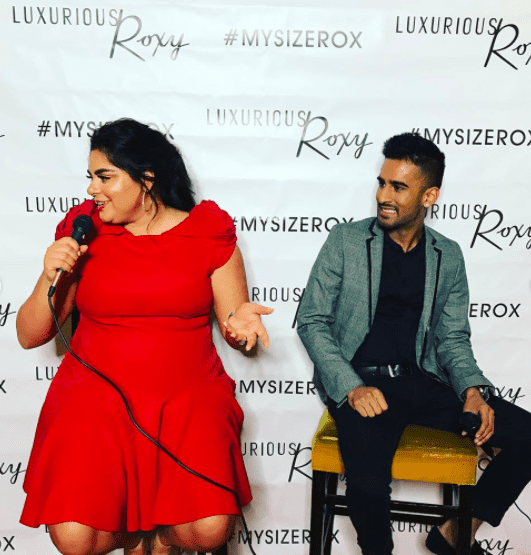 You may know Roxy Earle as the sassy, ultra-glam, larger-than-life cast member of The Real Housewives of Toronto, but it would be a mistake to label her as just a housewife. Roxy Earle is intent on building a body-confident empire.

Fresh off shooting her first campaign as a face of Addition Elle alongside legendary plus-size model Ashley Graham, Roxy gave a group of fifty fans a glimpse into her glamorous world at a sold-out three-course dinner and meet-and-greet at upscale Mexican restaurant Les Colibris in downtown Toronto.

I’m seated at a long table full of women with impeccable blowouts and sparkling statement necklaces. My seatmates on either side introduce themselves as Chrissy and Shannon, a pair of best friends in matching hot pink dresses and self-described Real Housewives franchise enthusiasts. I look around and spot similar sets of best friends and mother-daughter duos chatting and glancing curiously around the room.

Our table starts chatting over the signature “Roxy” cocktail, frothy and vibrant sangria, while waiting for the guest of honour to make her appearance. We all agree that Roxy was a standout in season one of Toronto’s edition of the infamous reality television franchise. And we’re clearly not alone: with Roxy’s incisive wit, low tolerance for bullshit, ultra-glam fashion sense, and message of body confidence and acceptance, she’s quickly amassed a large and devoted fan base.

Roxy was the first plus-size woman to be cast in the Real Housewives franchise. She’s since started a social media campaign, #MySizeRox, to spread the message of body confidence and to encourage designers to create more inclusive fashion. Roxy’s message has struck a chord with women who feel underrepresented in today’s fashion world and want more acceptance of body diversity on- and off- screen.

As we sip our cocktails, we realize that Roxy is a little more than fashionably late. We speculate our guest of honour is spending some extra time primping with her legendary “glam squad.” A quick visit to Roxy’s Instagram story confirms our suspicions.

Roxy finally enters the crowded room in a dramatic red Marchesa dress and diamond hoop-earrings. The extra time she took with her glam squad paid off — her hair and makeup are flawless. She takes a seat at the front of the room next to the evening’s host, Big Brother Canada’s Aneal Joshua, and waits for the cheering to die down.

“Cheers to being confident, happy, and fabulous—and to your size effing rocking,” she toasts. We all clink glasses.

Roxy explains that while initially she was worried about the response of Real Housewives of Toronto viewers to a plus-size cast member, the feedback from fans has been overwhelmingly positive and empowering. “As a teen, I desperately wanted to be a model but I just didn’t think it was possible,” she says. “Growing up in a suburb of Toronto, I was told I didn’t have ‘the look.’ I never felt like I was the pretty girl.”

Roxy is effusive and charismatic, gushing about confidence, her love for fashion, and the importance of empowering other women. She has big plans for her modelling and fashion career and won’t stop until she’s strutting down the catwalk at New York Fashion Week or launching her own fashion line.

“You’re always going to be the best at what you’re passionate about,” she advises.

Aneal opens up the discussion to questions from the audience. I raise my hand.

“So is there going to be a season two?”