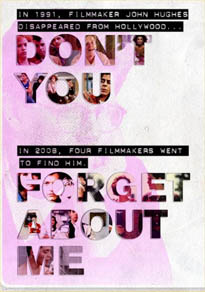 Why not make 2010 the year you really go after your dream? For local filmmaker Matt Austin, the dream was to make a documentary about Director John Hughes.  Years before Hughes tragically passed away, Austin and three friends went to find the idol who framed their teenage years with films like Ferris Bueller’s Day Off, The Breakfast Club, Weird Science and Sixteen Candles. Like the elusive author J.D Salinger, Hughes disappeared from the media gaze and directed his last film in 1991. Since then, Hollywood and fans alike have wondered about his whereabouts and collectively awaited a much anticipated revival in his work. Don’t You Forget About Me is a documentary that the Toronto team hoped would inspire his return; a feature length love letter.

It was a shock for Austin, and the world alike, when Hughes was pronounced dead on Aug 6, 09. “I was really sad, first for the people we made this movie for…then my second thought was ‘What a huge loss for the family,’ and thirdly I thought, ‘what the hell does this mean for our movie?’ We had made a living tribute to a man who just died…it was a weird worm hole that I felt we were in.” The tragic circumstances sparked immediate interest in the film,  and it was purchased by Alliance Films for a healthy sum – a deal that hastily transpired on a napkin.

Two years prior, the  plan to find John Hughes took the Toronto team all the way to his front door, knocking on the Chicago suburb mansion they had no idea what to expect. This determined journey is intertwined with an impressive line-up of interviews and montages of our favourite John Hughes film scenes. Together, these culminate in a poignant reflection of his career, obscure private life and provide a nostalgic rush back to pubescent days filled with curiousity and rage.

Talking heads include actors Ally Sheedy, Judd Nelson & Kelly Lebrock, critic Roger Ebert, Simple Minds and Directors Kevin Smith and Jason Reitman; a stellar list indeed. Ironically, the most interesting thing that Austin learned making the film was “how little contact he [Hughes] had with the people he was working with.” The most interesting thing we learned was that Simple Minds hadn’t even finished their hit “Don’t You Forget About Me” when recording it for The Breakfast Club so the band (then unknown) decided do improvise with a “la la la” chorus, which is quite possibly the most recognized bar of music from the entire decade. Amazing.

Hughes was certainly a genius, with a terrific capacity to empathize with the tortured teenage soul.  We rarely see teen movies today that uphold the same depth, wit and magic. After much inner debate, Austin finally declares that his favourite scene is “Farmer Ted and Samantha sitting in the auto shop during the school dance and he asks for her panties,”   Certainly all generation X-ers have a favourite scene, but it doesn’t stop there – youth today still rent Sixteen Candles for slumber parties and can easily identify sound bites, clips and scenes from the films their parents grew up on. “People aren’t John Hughes fans – fan is too light a word – people are really affected by John Hughes. Even if you didn’t know his name – his characters affected you in a deeply profound way.”

Now, Gossip Girl and The Hills lead the pack in teen entertainment, “It horrifies me that the main audience for these shows is fifteen year olds,” says Austin and adds, “…the hottest girl in my high school wore jogging pants.” He attests this change to the marketing machine that exploded in the late eighties. “People realized the kind of disposable income that teenagers had….and not just headbands.” Films targeted at teens today seem to lack the honest awkwardness and emotion that Hughes so acutely hit on.

Many questions will remain a mystery. Why did John Hughes stop making films? Was he in fact a tragic character? “He came from an industry where the goal is to reach as many eyes as possible – and he did that, so I feel like he must have been happy.”

We will never know why he left Hollywood– but one thing is for certain, he will live on as the penultimate teen storyteller and Don’t You Forget About Me will help to ensure that his supreme talents will not be forgotten.

Rent it at your local video store or on iTunes- it’s a terrific doc to motivate your creative aspirations for 2010 while also flooding you with the best of teenage angst, awkwardness and adventure from years past.