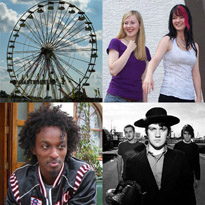 While August may not be the most fast-paced month on the block, it certainly doesn’t deserve the name Ugghh!ust, often yelled with fists thrown in the air and shaken madly at the Gods of Excitement.  Take heart! Buskerfest, Toronto After Dark and the CNE all figure in the month’s line up of boredom-busters.  Soak up the end-of-summer vibes to the tune of any number of the great shows going on.  Yep, we’ve got you covered.

Dala
August 13
First Canadian Place
These women made it from the side stage to the mainstage at Blue Skies in 30 minutes. Gorgeous folksy harmonies meet poppy happiness.  Good for blasting during a houseclean, a shower, or tearin up the tar on the 401.
http://www.dalagirls.com

Jason Mraz, G-Love & Special Sauce, K’naan
August 15 Molson Amphitheatre
As if this trifecta of pseudo-reggae chill is touring together.  You can count on the lawn being ablaze with what could be potentially the best jam fest of the summer.
http://www.jasonmraz.com
http://www.myspace.com/glovespecialsauce
http://knaanmusic.ning.com

Regina Spektor
August 16
Sound Academy
The empress of the ivories is back, promoting her latest album, Far (which is ab-fab if you haven’t given it an ear yet).  This will be a lovely show, surrounded by Spektor’s haunting vocals, infinitely better than hearing it “on the radio” (ew, what a shameless pun).
http://www.myspace.com/reginaspektor

Pearl Jam
August 21
Molson Amphiteatre
You can’t find “better men”  than these, at least when it comes to the empire of 90s rock.  Bust out the ripped jeans and faded plaid, dude!
http://www.pearljam.com

Modest Mouse
August 20 &21
Sound Academy
http://www.modestmousemusic.com
Haven’t heard much from these guys in awhile, but they’ve just released a new EP.  The band’s sound has evolved a bunch, incorporating a tonne of strings, we’ll see how their live show fares.

Jonas Brothers
August 30
Rogers Centre
http://www.jonasbrothers.com
Do I really need to introduce these guys?  I can hear the screaming already…

Planet IndigenUS
August 14-23
Harbourfront
A celebration of indigenous cultures the world over, this festival is an explosion of literature, arts, music, dance, crafts, theatre, film, and performances.  The festival aims to celebrate and recognize indigenous cultures while expanding the audience these cultures reach with their art.

Buskerfest
August 27-29
St. Lawrence Market
Where else can you watch someone escape from chains while playing a kazoo with his/her nostril and simultaneously making tofu spaghetti? You gotta see it to believe it.
http://www.torontobuskerfest.com

The CNE
August 21-September 7
Let’s stuff ourselves with cotton candy, mini doughnuts, pretzels and sno-cones AND THEN! Go on as many dizzying rides—preferably backwards, warp-speed, and circular—as possible.  Last person to puke wins.  But pre-vom, make sure you check out the baby piglets in the farm exhibition; they’re undeniably cuter than a teeming basket of Anne Geddes babies.
www.theex.com