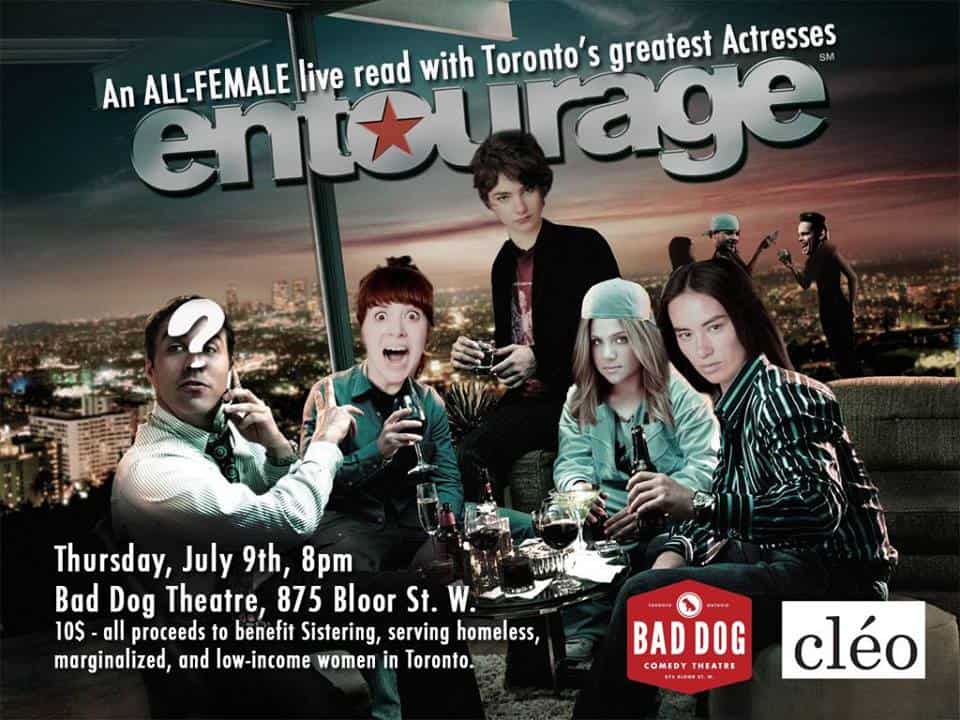 Chandler Levack is a local writer, cinephile and host of the beloved “That Time of The Month” party at Dundas West’s Hen House. So it’s quite fitting that she be the creative organizer behind this week’s most anticipated event: Entourage All-Female Live Reading at Bad Dog Theatre. The inaugural feminist reading is already receiving a ton of buzz.

The show, dominated by strong male characters, will be performed by some of our favourite local actresses: Katie Boland, Lauren Collins, Cara Gee and Kayla Lorette, along with some stand-up routines by comedians Christina Walkinshaw and Amanda Brooke-Perrin. It’s going to be a night of gender-swapping hilarity; you really ought to go. Here, we get the lowdown from Levack:

Where did this idea come from?

I was on Twitter late at night reading about the Entourage movie coming out. And I think I just tweeted, “Can I organize a live-read of the Entourage pilot with an all-female cast?” and tagged some of my favourite actresses and comedians in the city as my dream cast. This was met with an enthusiastic response online, but maybe more importantly, I got really excited and started thinking, “I should just do this.” I believe that the genesis of any great event is something that you would really be excited to go to but maybe doesn’t exist in the world yet. So it’s important to follow that instinct and make something happen. I’m thrilled that my incredible dream cast got on board and the excitement for which this event has been met with!

Of all the shows, how did you decide on Entourage?

Entourage is one of my mom’s favourite shows and I grew up with it playing in the house all the time. She loves Ari Gold and always calls him, “the Pivs,” after Jeremy Piven. So it was around a lot when I was in high school but my mom and dad would get mad at me when I criticized the show for being sexist or for its treatment of women. I knew at the core that it was this meta-fantasy of Hollywood, but it bothered me that there were so few strong female characters and most were disposable hotties to be bartered/gained between Vince, Turtle, E and Johnny Drama. I certainly couldn’t find anyone I related to but what teenage girl could, watching pop culture in early 2000s? It was a terrible time and we all wore Von Dutch.

With the movie coming out, Entourage is back in the cultural conversation again. There are a lot of think-pieces coming out about the show’s sexism and antiquated values, especially since the depiction of women in film/television is slowwwwwllllyyy changing, thanks to lady heroes like Amy Schumer, Lena Dunham, Jenji Kohan, the women of Broad City, Shonda Rhimes – and let’s give a shoutout to Taylor Swift, Rihanna and Beyonce while we’re at it. I think an all-female live read of Entourage is a great starting point to talk about the disparity of compelling female characters in film and television, and how these roles can be deconstructed by local filmmakers, screenwriters and actresses and maybe be made anew.

Why cast all women?

This idea was partially inspired by this interview I read in which Olivia Wilde was talking about her experience participating in an American Pie live read, which is a series created by Jason Reitman, to which this event owes a huge debt! (Please don’t sue us, Jason Reitman, we love you.) I’ve been lucky enough to attend his two past live reads at TIFF for American Beauty and Boogie Nights and as a screenwriter/film junkie, they were incredibly cool, formative experiences that celebrate the screenplay. Anyway, Reitman cast American Pie so all the male roles were played by women and all the female roles were played by guys. Wilde said that it was uncomfortable for the male actors to simply sit there with nothing to do in a scene and no jokes or moments of their own. They said it was boring to play the girl role and Olivia was like, “Welcome to our world!”

I think by simply gender-swapping the roles of Entourage you do put the onus on the audience member to really re-think what the text means. And it’s also really fucking hilarious.

Are you hoping to make this a regular thing? If so, what other readings would you like to do?

I would LOVE to make this a regular feminist live reading series in Toronto. It basically excites me so much that I have been going through Netflix with a whole new burst of energy. And I’m working with really smart women like Kiva Reardon, who created the feminist journal cleo (our sponsor) and Lindsay Allikas, a filmmaker/editor, to chat about potential live reads in the future. What’s really exciting for me is the idea of casting women who are involved in the comedy/film/music/literary communities in the city. Women who may be tired of playing girlfriends or the best friend. And women of different races and body types and sexual orientations. Casting women who don’t often get represented in film and television but have endless possibilities if you swap the genders.

The next feminist live read I’d like to organize is Reservoir Dogs, which is a great ensemble film, a good mix of comedy and drama and plum roles for women of all ages. Also the only female character in the film gets instantly shot in the face so… My number one dream is to have Tatiana Maslany play Mr. Pink.

Other live reads that would be really cool could play up different conventions of masculinity in cinema, such as the man-child (Billy Madison), a Judd Apatow-style bromance like Superbad or The Hangover or a “dude with a problem” coming-of-age drama. I’d love to do Fight Club and Goodfellas. But I also LOVE romantic comedies. I’m also interested in doing a straight non-gender swapping read of a great movie for women like Legally Blonde, Romy and Michele’s High School Reunion or Bridesmaids. The possibilities are literally endless! I’m always looking for suggestions (and casting ideas) – so please tweet me @clevack if you want to get involved.

What kind of vibe are you hoping for? Or what can guests expect?

Guests can expect two great stand-up sets by Christina Walkinshaw and Amanda Brooke-Perrin, who are both hilarious comics, and a night of bro-tastic comedy with an incredible cast. We’ve got Katie Boland playing Vince, Cara Gee playing Johnny Drama, Kayla Lorette playing E, and Lauren Collins – aka Paige from Degrassi! – playing Turtle. These actresses are sensational and at the top of their game. Also a super secret Ari Gold who is gonna crush it beyond all compare.

The Bad Dog Theatre can only seat 74 people so it will be intimate and fun. I’ll be there reading stage directions too, so you can probably expect a short woman who is a size 8 at Old Navy being sweaty with a very loud laugh.

What’s the best part of Entourage?

The genuine love that Turtle, Vince, Johnny Drama, E and Ari have for each other, even though it is probably part repressed homosexuality. Just kidding, Entourage is great. LET’S HUG IT OUT, BITCH!