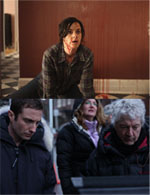 Filmmaker Jacob Tierney and Actress Emily Hampshire are two Canadians you should really know about.

Directed by Jacob Tierney and starring Emily Hampshire, Good Neighbours opens in theatres this weekend. It was a hit at TIFF 2010, and yes, the year before Tierney directed The Trotsky, which also starred Hampshire, likewise, it was also a TIFF favourite. Keeping busy, he is in LA developing scripts and Hampshire is here in Toronto, with, ahem, co-star Robert Pattinson, currently shooting David Cronenberg’s new film, Cosmopolis.

Safe to say these two young Montrealers are hotter than a flaming Pop Tart dipped in gasoline. Incredibly talented, humble, intelligent and laid back, Hampshire and Tierney are the kind of people I want to drink beer with in my backyard. They are also besties whose platonic love affair began as roommates on crack corner, or Sherbourne and Queen. A few years later, Tierney got himself ordained online to officiate Hampshire’s wedding. What’s with these two? SOULMATES!

< p>How Hampshire describes Tierney:
Best friends but more like twins separated at brith. You know those people who finish each others sentences? He (Tierney) always says to me, “I needed to call you to know what I was thinking.” And that’s how I feel about him….to understand my brain, I sometimes need to ask him.

How Tierney describes Hampshire:
I love Emily. I think she’s a genius.

Why she likes working with him:
He’s such a good captain of a ship. Any ship! Jacob is one of the most generous people in terms of what he gives of himself and how he listens. He’s generous in spirit. I asked him once why and how him and his sister were such geniuses, “My Dad always said he wanted to raise kids he could have dinner with.” That made perfect sense to me.

Why he admires her as an actor:
It’s easy to be afraid of actors like Emily becasue the choices she makes are unconventional…more interesting, more complicated and more real. She’s a force of nature! She’s also probably the best script reader in the world and one with the smartest analysis. Everything I write, every draft, I send to Emily, whether she’s in it or not, I always want her thoughts.

Although they are now both based out of LA, their heart belongs to Montreal.

Why he loves Montreal:
“I love the way it looks. It’s easy to film. Island’s have their own mentalities….I love that atmosphere. I like the perpective it (Montreal) has afforded me: being a white English guy and a minority. I think it’s made me a more interesting artist and person. I’m sorry I used the word artist. (See, I told you…he’s humble.)

Why she loves Montreal:
Montreal is a really sexy city. I love walking around cobblestone streets.

What attracted Hampshire to the role of Louise?
I admire how she doesn’t give a shit. She doesn’t react to the guys, she sets the action up. It’s not the kind of part you get as a woman. I admired her, envied her.

Good Neigbhours, bad neighbours, what do they remember from their time together as roommates in Toronto?

Tierney: The downstairs neighbour stole my mail and cashed a cheque.

Hampshire: Whenever we came home, someone would be giving somoene head in the doorway. But they were so polite.