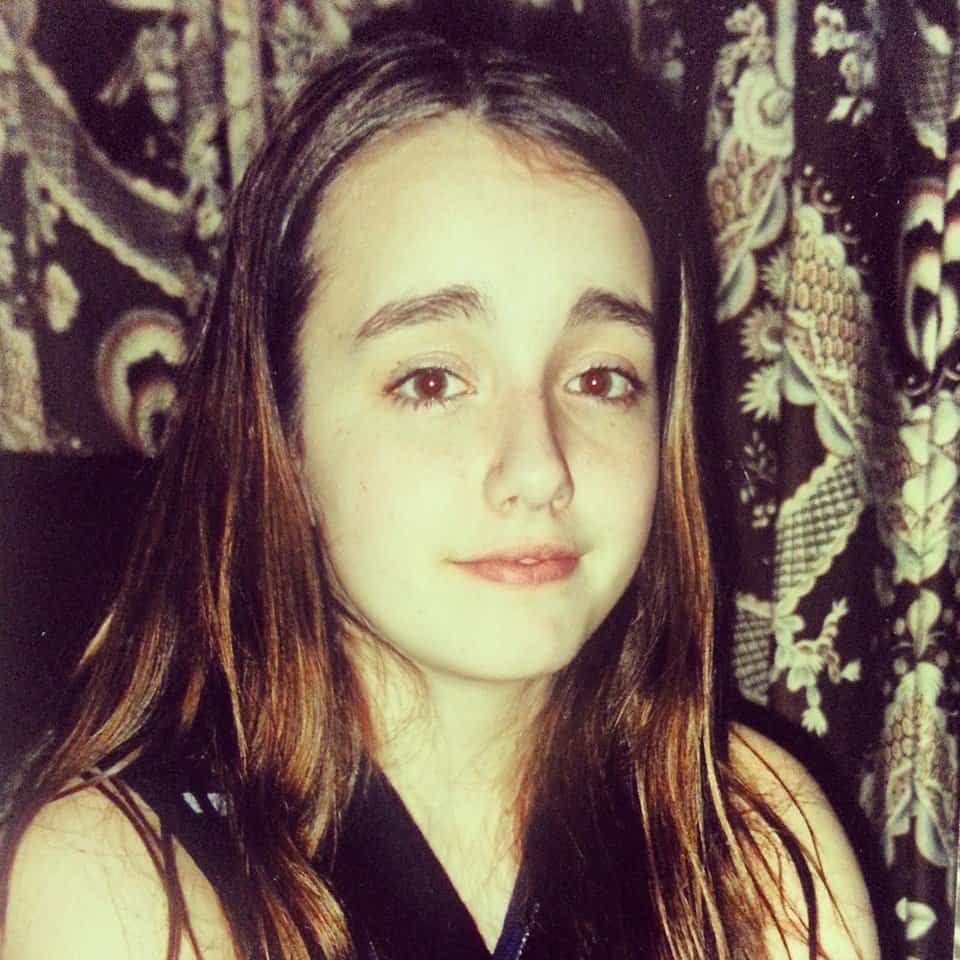 It was the fall of 1998. Back when my chosen attire was Modrobes, my favourite movie was Can’t Hardly Wait and my feminist icons were The Spice Girls. I would spend my days fawning over Jonathan Taylor Thomas, playing baseball like I was Geena Davis from A League of Their Own and praying every night that my breasts would come in full force.

After my voice dropped and my height soared, there was only one missing piece to the fully developed lady puzzle. I required a visit from my womb’s sister. You know who I’m talkin’ ‘bout. The one, the only, the legendary, the pool party ruining, camp weekend complicating, bed sheet permanently staining Aunt Flo. I desperately wanted to meet her! So, where the h and double hockey sticks was she? What did she look like? How did she behave? What were her quirks and kinks? Was she going to be a regular visitor or a sporadic one? Was her hair beet red or more of a muted brown? Was she going to be kinda painful and annoying and ruin my white pants (which I owned several pairs of) or was she going to be light and breezy and easy going like a Len song? I NEEDED TO HAVE THESE ANSWERS.

But, alas, all I could do was wait, ‘cause she was unpredictable and I had no clue that she was going to knock for the first time smack dab in the middle of french class. My teacher, who I am going to refer to as Madame Dinosaur (because that is how I remember incorrectly pronouncing her last name), was rambling on about the legacy of Pierre Trudeau and as per usual I wasn’t paying attention. As she went on and on about about his many turtlenecks my stomach began to twist and turn and ache and burn. It was a slow, fierce rumble that grew as the hours dragged on. I raised my hand and asked Madame Dinosaur to use la toilette about a dozen times.

I went into the bathroom, sat on the above mentioned la toilette and grabbed hold of my pounding stomach thinking that the damn Count Chocula I ate for breakfast had done it to my bowels again. My mom always said sugar would be the end of me and this was clearly the apocalypse. The sugar had morphed into a ferocious processed beast and it was ripping apart my insides in the name of empty calorie cereal! And the monster wouldn’t face me man to man, it was hiding within the pits of my belly.

Sure, I had a bit of a number two coming out from the back and a splash of number one from the front but generally there wasn’t much being unveiled. I wasn’t vomiting. I wasn’t diarrheaing. I wasn’t farting. But the pain persisted and got more and more intense as Madame Dinosaur’s suspicions that I was doing drugs in the washroom became more substantial. Her eyebrow would raise higher and higher as I continued my fight against the Count wreaking havoc in my body.

The last time I put in a la toilette request my pal Ramona decided to join me. “Good” I thought, “At least I won’t die alone.” I dropped my pants, took a seat and began doing… nothing, as I had the previous fifteen times. At one point Ramona heard me moan and asked, concerned; “Are you okay?” I explained to her that I ate Count Chocula for breakfast and was now on my death bed.

“Or maybe you’re just getting your period,” she said, rationally.

“NO WAY THAT IS NOT POSSIBLE YOU’RE AN IDIOT RAMONA” I replied.

Why I was so incredulous I’ll never know. Even though I had been waiting for Aunt Flo to pop in I was certain this wasn’t that specific pop in.

After I wiped the “nothing” that was there, I took a look at said wipe, as most humans do and I was shocked to see that the tissue was red. “RED! IT’S RED. I’M CUT! I’M INJURED! CALL 911” I shrieked in a panic, to which Ramona replied “Or maybe you just got your period.” I laughed. Hysterically. “NO WAY THAT IS NOT POSSIBLE YOU’RE AN IDIOT RAMONA… unless… holy… shit”. I flushed the toilet, ran out of the stall and kept running until I got to my mom’s room. She was a teacher at the school I attended. I told her what happened and she gave me a tight, warm hug. “October 6th. I’ll remember this as the day you became a woman.” I rolled my eyes. I hated it when she spoke like a Hallmark card. I know this was emotional for her but I was really only there to get some tampons, the “real woman’s period helper”. But she didn’t have any ‘cause she didn’t believe in ‘em apparently. What she did believe in though were pads so massive that they could be classified as legit diapers. “It’s kinda vintage” I thought, “like I’m a baby again. I could probably even crap into this thing if I wanted.”

I strapped one of those puppies to my smiley face patterned underpants and went on with my day, which proved to be a tad more difficult when you have a feminine care product the size of a frisbee in your pants. Best part was, even though the sanitary napkin was larger than my head, I still managed to put it on wrong and have the blood miss it entirely. I placed it high in the front of my underwear as if my vulva was ten inches above where it actually was. Why I did this I do not know. I think my logic may have been that women bleed up (HUH?) and thus I should prepare for the rising of the red tide. This of course is the opposite of what happens so inevitably I began to leak… a lot… through my underwear, through my pants, and onto a chair.

It was a chair I was sitting on while working at a book fair. Yes. I was on duty in the afternoon, graciously volunteering my time and avoiding lessons about Trudeau’s turtlenecks. I was walking around the fair showing young kids where they could find Goosebump books and Robert Munsch collections all the while my ass was covered in menstruation. When I mentioned to Ramona that people were looking at me strangely and my book fair sales were down and it must be the cold weather making people act funny, Ramona replied “Or maybe it’s that you leaked through your pants,” and she pointed to my butt. I looked behind and screamed in horror.

I yelled at her for not informing me sooner but she promised me she hadn’t noticed it until that very moment. I wrapped a sweater around my waist to mask it and luckily no one questioned the fashion choice. It was the 90’s and the style at that time. In fact, a few of my friends complimented me on my look that day. I found a lot of pals saying things like “Jess, you’re so pretty today. Did you get a haircut?” to which I would reply “Nope. Nothing different about me… nothing different at all” and then I would coyly wink at Aunt Flo. I was an adult woman with a secret and I loved every minute of it, minus the leaking and the diaper and the cramps.

Jess Beaulieu is a writer, comedian, and feminist from Toronto, Canada. She co-hosts a weekly podcast about periods called The Crimson Wave available on iTunes. @msjessbeaulieu