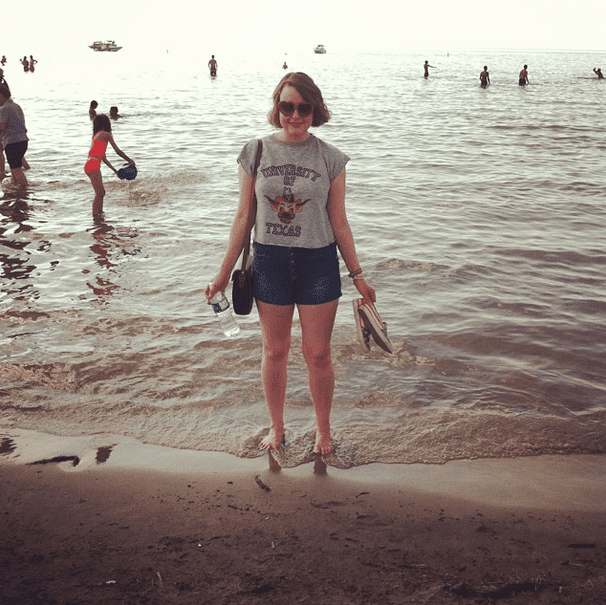 "Mean dudes are not dudes worth being around. I say this as someone who tried for six years to make something work with a guy who egged my house on my 17th birthday."
Sex & Relationships

Each and every one of us has made horrible dating mistakes. Obviously, I am no exception because I am a human being and when I was 12 once tried to date a boy who burned down a townhouse, who was also 12. (Though in all fairness he wasn’t alone – and the two guys he burned down the house with are in jail now. But then again, so is he, so it’s more of a cautionary tale, I guess.)

As you may have surmised, I didn’t get off to a great start. And because stories like these are only good when you tell people and laugh at yourself, here are five things I wish I’d known when I tried conquering the world of boys and gentlemen.

1. Trying to date the guy who burned down the townhouse isn’t a great idea
All I am saying is that if you meet a guy who seems interesting because of the bad things he does, it’s not going to end well for anybody. Not you, not him, and certainly not your friends, who will be subject to each and every “I mean, yes, he threw a chair in class, but Mrs. McGrath made him mad, okay?” revelation you will have. There are “bad boys” who legitimately make their own luck (like Jack Dawson), and there are the “bad boys” who will inevitably end up in a federal penitentiary (like Jordan Belfort). And, yes, some of those men will learn from their mistakes—who am I to say they won’t? But for the most part, you will want to date them after they do that, and not when they get into a fight in the library and ruin all the computers. You get it.

2. That said, trying to date a guy when he’s dating your best friend is equally bad
And of course, I am absolutely referring to the same guy because I live to put myself in terrible situations. As you can tell, this boy had appeal (on top of his Leonardo DiCaprio hair), which stemmed from his lack of interest in doing anything but whatever he wanted, whenever he wanted to do it. That’s why, after I was heartbroken that he was dating my best friend, I continued talking to him on the phone every night until he told me that he liked me back. And of course, nothing happened. Partially out of loyalty to my best friend, partially because I wasn’t allowed to talk to him on the phone anymore when my Mom found out he had a criminal record, and partially because we were 13 and if he was going to try and two-time in the first place, he was probably looking for a little more side action than phone chats while I built 3D puzzles.

3. Anything “secret” is code for “get the hell out and I mean now”
And may we thank the prude gods that be that I was too scared to properly hook up with the “super hot” 18-year-old who propositioned grade nines to secretly give him blowjobs in one of his two shitty vans. Like, number one, why do you have two vans. And number two, I thank the prude gods again that I found out about the dozen or so other girls before I racked up the courage to stop talking to him on ICQ. Or: I at least stopped messaging first. So take that, James Franco in Spring Breakers/real life maybe!

4. No, but really: anything “secret” is code for “get the hell out and I mean now”
Probably one of the worst things a teenage guy can say to a teenage girl is “Don’t tell anybody about this because I’ll be embarrassed.” Phrases like that are a Douchebag Bat Signal, and a sign that you should quietly stand up, leave the room, then let 1400 spiders into his home like that scene in Harry Potter. But I chose not to do that. Instead, upon hearing that phrase – and getting an email telling me not to kiss him goodbye because “that’s not what this is about” – I chose to keep “hanging out” with said guy until he got out of the car one afternoon, picked up his phone, and called the girl he was actually trying to date, while I sat there. Things that are supposed to be secret: Monica and Chandler’s relationship during that season of Friends. Things that are not: most other relationship things.

5. You can’t turn a gay guy straight, so don’t even try
Not even if you’re drunk on your 20th birthday, and begging him to consider dating you, while you sit on the curb in front of your house, nearly crying. Not even then. He will still be a gay man who has told you – countless times – that he is gay. Why? Because he wants to date men, and would like to have a boyfriend, that’s just who’s he’s attracted to, this is really not about you in any way. (And then, ten years later, you will laugh about it when you run into each other at the mall. After you’ve apologized. Numerous times. It will always be embarrassing.)

Bonus round: a guy bullying you is not code for “I think we should date”
Probably one of the biggest lessons I’ve learned is that mean dudes are not dudes worth being around. I say this as someone who has met many (as most of us have), and I say this as someone who tried for six years to make something work with a guy who egged my house on my 17th birthday. (And egged me. And egged my house another time. And those are three incidences out of 400 that occurred between the ages of 15 and 21 when I wanted to date him, because . . . who knows [shrugging emoticon].)

“But Anne!” you say. “These are all lessons from your teen years!” Correct! They are. But despite these being super-relevant to the 20-and-under crowd, these patterns tend to begin when we’re wee babies and carry on til we have the strength to stop them. Many of us have still likely found ourselves in more than a few of them, more recently than we’d like to admit. I wish I’d had the guts to tell “don’t tell anybody” guy that he could expect a global announcement about said hook-up the next day, or told the 18-year-old that needed to check himself (into a police station, I think). But I was scared, and young, and naïve, and damn it, I just wanted them to like me.

So here’s the thing I most wish I’d known then: we shouldn’t have to convince guys to like us. Why should we when we don’t have to convince our friends to do the same? We wouldn’t accept friends treating us badly or asking for secret friendships, and we wouldn’t allow them to vandalize our property – just as we wouldn’t ask them to change who they are, or to stop being themselves. But most importantly, I wish I’d paid more attention to that computer fight in the library because then I could’ve really told a story.

"Mean dudes are not dudes worth being around. I say this as someone who tried for six years to make something work with a guy who egged my house on my 17th birthday."