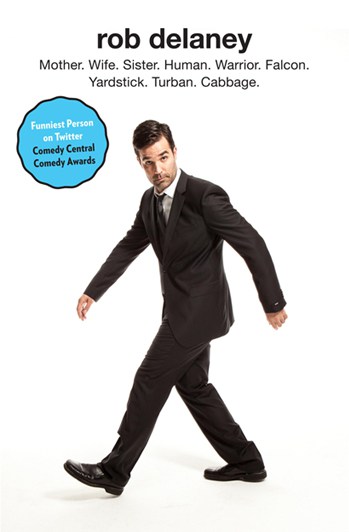 The other week, I tweeted something weird at Rob Delaney, twitter’s favourite comedy pervert. I can’t even remember what it was, except that I insinuated I wanted his email address for… personal reasons. It was weird of me but I just can’t resist a hairy auteur, and Delaney just wrote his first book! It is self-titled, and it is great. I know it is great because after tweeting at him he SENT ME A COPY FOR FREE! #chaching #nailedit #robcallme

It arrived on Friday, and I finished it by Saturday afternoon because I basically could not stop reading. While it’s not a perfect debut (my favourite Delaney writings, either on twitter or through his VICE or Guardian columns are about his politics which are, basically, flawless, and this book deals mostly with his troubled relationship to alcohol), it is still very good and most definitely worth a read. It is worth a read because the man is:

1) HONEST. Hoo boy, is he ever. His writing style is clean and straightforward, leading him to describe a childhood birthday party in the same easy-to-understand prose he later uses to describe realizing his friend has possibly drowned in a harbour, or the experience of clinical depression. His commitment to the truth, even when the truth is “everyone in jail saw my naked asshole” is impressive and moving.

2) Handsome. Okay, it’s not good practice to give people things just because they are good looking but Rob Delaney is a real Dad 10. There’s no way around it, I wonder what his chest hair smells like. (VERY good reason to read his book.)

4) Harrowing. Well maybe he isn’t, as a man, but the book certainly is. Chronicling his struggles with addiction and the friendships, lessons, and hard times acquired in treatment, the book is perhaps heavier in subject matter than some might have expected from a comedian’s memoir, but those people are dumb, because comedians are some of the darkest people there are. Delaney has been through dark times and come out the other side, and he does not spare the reader (or his dignity) in his descriptions of them.

5) Hilarious. Full disclosure, I wanted more outright Haha’s from this book. It did make me snort in public once, but on the whole I imagine it’s fairly hard to be laugh-out-loud funny about substance abuse, and Delaney still manages to keep it light and fun where appropriate, while getting serious when he needs to. Peppered throughout the book are pages of tweets, sort of a Greatest Hits from the comedian’s collection of over 17,500, which spice things up and offer a quick hit of wordplay, perversity or funny feminism in between longer chapters. It’s a well-curated nod to Delaney’s origins on the global comedy scene, and doesn’t take away from the achievement of the book itself.