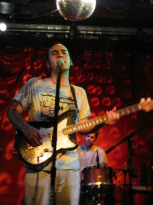 Fool’s Gold, the LA collective who weave African music with folk-pop into a dance explosion, stopped by El Mocambo on Wednesday night. Playing to an intimate late-night crowd, the international band, whose members hail from Israel, Latin America and the States, have a cohesive on-stage presence that stems from the fact that they seem truly joyful when they play together. The result is a live performance that surges with energy. The band tumbled off the stage and into the crowd, create a tornado of dancing, clapping, and percussion. The band worked incredibly well with the small crowd, seeming to fill the space with their sound, and I was left with the impression that the same would have been true in a giant opera hall or at an outdoor music festival. The genuine passion for what they’re creating make you as happy to be watching them as they are to be playing for you. They’re headed to Europe next, but we hope they come back soon.

The Great Canadian Girlesque Expo ’13 is coming to Toronto

An interview with Rosie Blais, lead singer of Enjoy Your Pumas, whose soulful voice has Emily Haines comparisons flying left, right and centre

She Does The City Does Canadian Music Week 2012