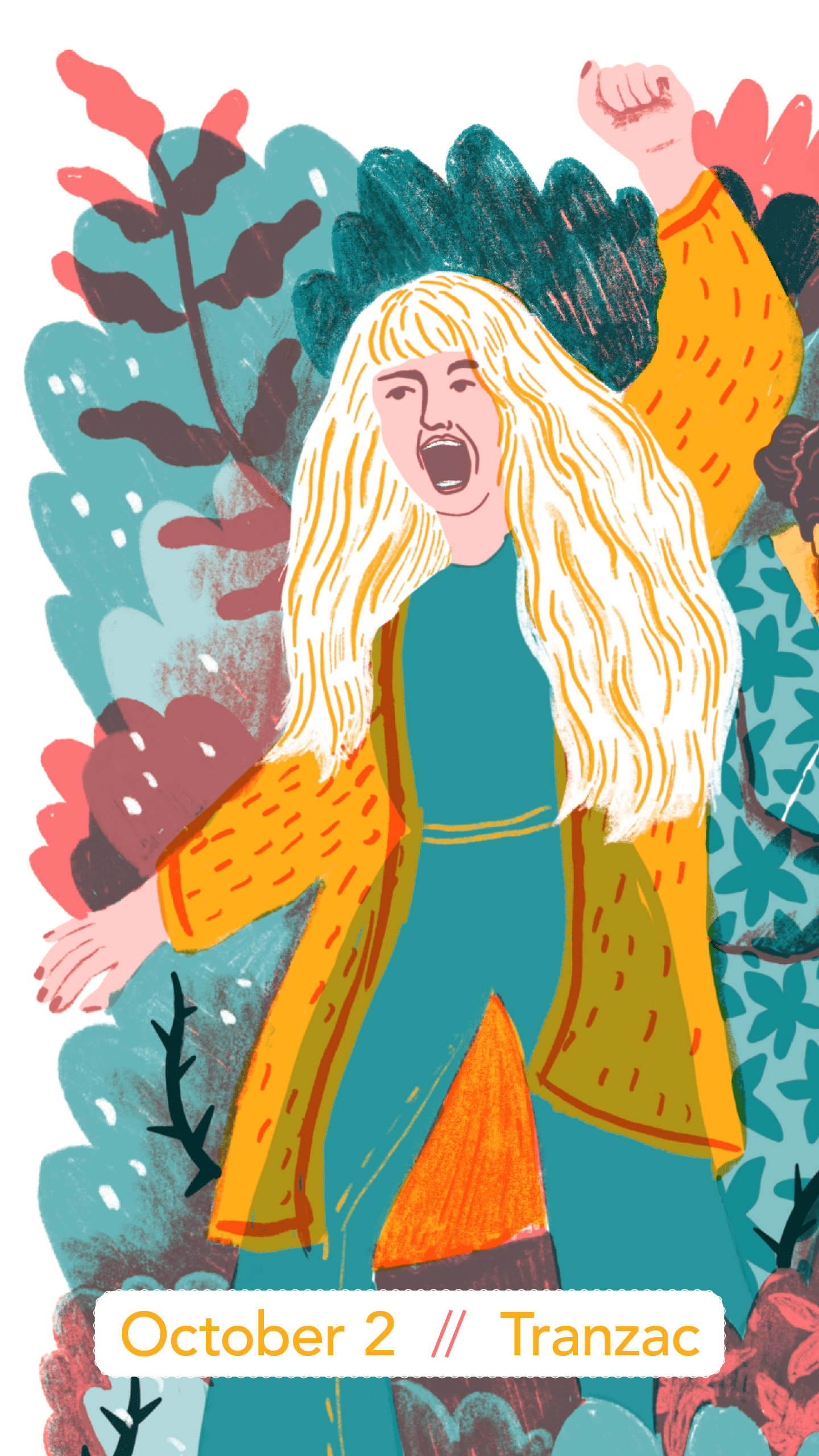 For All The Womxn Who’ve Ever Been Called “Too Much”

With all of the ways the people in our lives are constantly trying to diminish women, to make us small, to put out our fire, With/out Pretend wanted to create a space to be unapologetic, unashamed, unafraid, and unencumbered by the weight of everyone else’s expectations. At Hysterical: a night of stories (coming to Tranzac on October 2), you’ll hear from ten remarkable storytellers sharing their experiences with being called “too much,” and finding tears, laughter, clarity and strength.

We chatted with three of them this week. 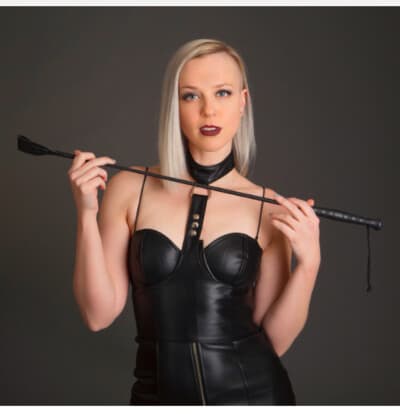 Misha Gajewski is a freelance journalist, educator and a producer/co-host for the Story Collider Podcast. She writes a popular real estate column for BlogTO and is a script writer for the YouTube channel SciShow. She describes herself as “a curmudgeonly old man trapped in a millennial body.” 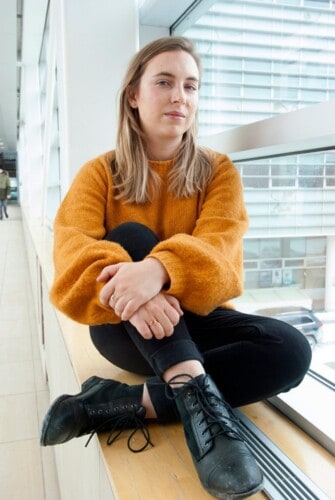 Nashwa Khan is a freelance writer/perpetual student who typically writes about race, being Muslim in diaspora and feminism. “I am someone who is trying to learn by doing,” she notes. “I do community-based work (or I try to!), and I am trying to spend the year honouring my ancestors through my work in different ways and learning from people I work with, youth, land and water while trying to be reciprocal in all my relations.” 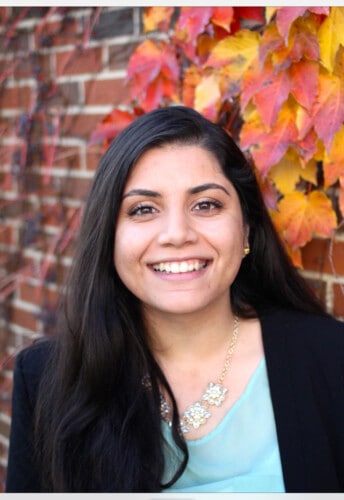 SDTC: Have you ever been called “hysterical”? When was the last time you were told you were “too much” of something?

EP: The last time that I was told I was “too much” was when I held a managing position at a restaurant. I had been working there for about five years, and by all accounts and circumstances I should have been considered one of the most experienced, hard-working, and dependable employees at this business. Instead I was seen as “too young,” “too opinionated,” and “too emotional.” My ideas and suggestions were cast aside, and my hard work was constantly overlooked. What’s worse is that the main person who made me feel this way was also a woman. Luckily I had minimal contact with her, because every time I was speaking about something passionately, she was fond of saying “You look like you’re going to cry.”

MG: I’ve probably been called hysterical at some point. But I’ve also been told I’m too confident, have too much attitude, or am too moody more times than I can count. The last time I remember being told I was “too much” of something was a few years ago by an editor I worked for. I’ve never been shy of voicing my opinions, but at this one job, apparently, it was wrong to speak up.

During a morning meeting where we were discussing ideas for the day people were speaking on the topic of taking vitamins. Everyone was saying that they believed that taking vitamins was necessary for their health, a statement which is mostly false (if you believe scientific research). So I told them that if you look at the research, evidence shows that if you eat a healthy diet there’s no reason you need to take additional vitamins. You’re essentially just making your urine really expensive. A few weeks later, I got into an argument with my editor when she changed something in my article that made it factually incorrect. So she later took me aside and told me I was “too confident.” She brought up the vitamin discussion and said she was embarrassed for me that I had spoken out like that. She made me feel like being sure of my work and my knowledge was something to be ashamed of. It was humiliating and frustrating because I knew I was right but she made me doubt myself and my skills.

NK: I think my family, as immigrants, and other working-class folks may not exactly use the word “hysterical,” but I do know that the spirit of calling and almost pinning certain women as hysterical is something that transcends language and culture.

From a very young age I was described as opinionated, loud and outgoing. Today I am definitely only a fragment of that. What’s wild is that people around me attribute it to maturity but I think it is so much more complicated. I now live a bit more in my head and through my writing when I can. I also hold words closer to my heart to protect myself because to be a sensitive observer in a harsh world teaches you to perhaps not conform but to protect your energy and what you give to the world. Perhaps I am scared of being a full version of me. As a kid I was definitely bolder and braver. My dreams lacked the borders and limits it has today. I think this is grounded in how we see ourselves through others and may moderate ourselves accordingly.

As you look over the last few years, are you more or less encumbered by the expectations of others? Have you been able to move beyond others’ opinions of you?

EP: As I get older, I find myself caring less and less about what others think. Today I am an open sex worker, and I am proud of my achievements. Of course, we all have our moments of weakness. But, I’m not a robot. I’m not perfect. And I’m usually okay with that.

MG: I don’t think other people’s expectations ever really burdened me too much. Sure, I wanted to make my parents proud but I figured out pretty early on that as long as I was happy, they were happy. Oddly enough what has encumbered me are my own expectations of how I should be doing in my life. I’ve always been a control freak and would feel lost if I didn’t know what the next five years of my life looked like. And I’m not sure why but I felt like I had to accomplish everything by 30. If I didn’t, I failed. But recently I learned to let go of my 16-year-old vision of what my life should look like because 16-year-old me was a moron who wore toe socks, and I shouldn’t be trying to live up to her expectations. Also, not comparing my life to people’s highlight reel on social media is always helpful.

NK: Growing up as a brown girl who was too much—bakwas, chalak, every urdu word used to chip away at confident and vibrant girls—I think it would be disingenuous of me to say that some words don’t stick to me. I think the narrative we love to sing in a feminist echo chamber is that we resist or use it to inspire us to be different or defy expectations. I think that is a really unhealthy place to work from and it also limits us to always working in modes of defence instead of working in modes of doing things we love, believe in, and want for ourselves. For those who have been thought of as hysterical, I think the distraction of always fighting back or counter-storying is an intentional way to have us burn out and waste our time and energy to never produce or create in ways that fulfill and feed us. I think today, especially being an adult with parts of myself in so many worlds, I do move beyond others’ opinions of me, but I did this with the love and support of a few who have always valued and loved me. The world is a lonely place without that. I also have come to a point where people who were very resistant to my ideas and values now appreciate them, because being woke is cool now. That might actually be harder to reconcile with than those who have different opinions or mismatched expectations. It almost feels like woke gaslighting; were the last few years real? I digress though. The more who are into being socially conscious the merrier, just thank your teachers.

I do sometimes get sad looking back or hearing about memories and I wonder: do these people realize they and the world have grinded me down? Especially when my family discusses how outgoing I was as a kid or shares stories about the ways I was so brave. I am really working to be less of a shell of baby Nashwa. She’s in there, probably just smarter about vulnerability though.

What advice/wisdom would you give to your younger self?

EP: I would tell myself that “caring less” is not the answer. Be passionate. Be emotional. Be messy. These are not female traits. They are human traits.

MG: You’re doing fine. You’re not failing. You won’t end up homeless under a bridge if you go freelance. Your life doesn’t end at 30. Stop thinking you need to have your entire life figured out. It’s okay to change your mind, where you live and your career. Also tell your grandma to stuff it when she tells you you’ll never be loved because you have piercings and tattoos. You don’t need that kind of negativity! Plus, your piercings and tattoos are badass.

NK: The things I would tell my younger self change every time I do a prompt like this. I think that says so much about how much my younger self and our younger selves in general need someone like our older selves. I think in this moment I am thinking about how much I would love to tell my younger self that my dad’s family is fucked and basically everyone’s dad’s family is fucked. And that is okay. So simple, yet it would have done so much. Thinking I was wrong or the only one finding things bizarre really could have been easily avoided with understanding that families can be wrong and harsh in ways the rest of the world is not.

What will you speak about at this installment of With/out Pretend’s event?

MG: I’ll be talking about a time in my life where I had a bit of a mental breakdown over some shoes. Spoiler: It was never about the shoes.

NK: I will likely be talking about families. And specifically what it is like for the family to be such a small and concentrated site for love and care but also violence in many forms, and gaslighting. And what it means to see ourselves and the world through our families and then move from there. This topic has so many ways to go, and I am excited to share but also hear.