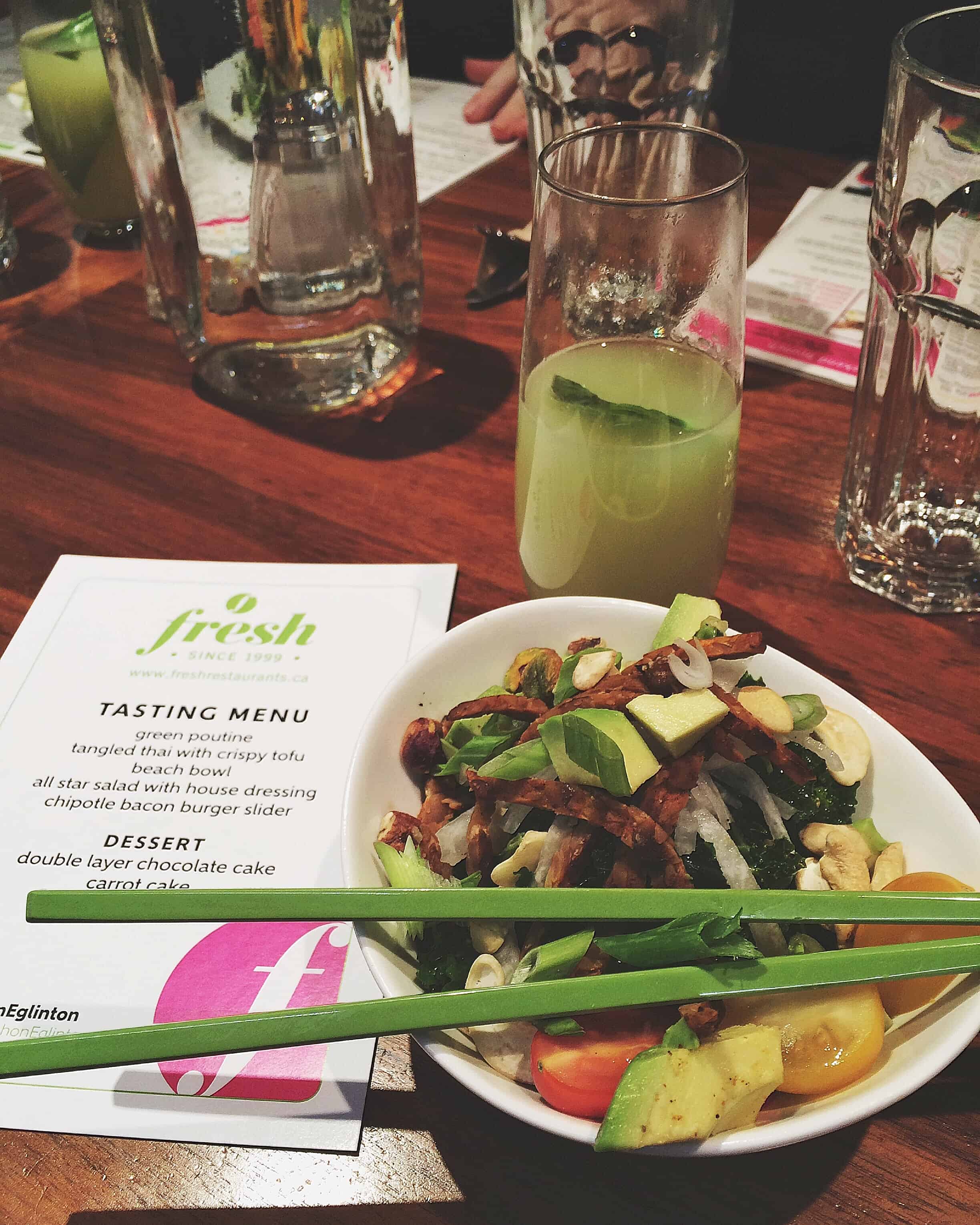 As a recent university grad, I’m still getting accustomed to the perks that come along with working in journalism. When She Does The City asked me to attend a media-exclusive dinner at Fresh Restaurants and meet co-owners Ruth Tal and Barry Alper, I was like, “You had me at vegan.” But even as a plant-based food blogger (@vegangirlfriend) hyper-familiarized with Toronto’s vegan restaurant scene, I had no idea what I was getting myself into.

Upon arrival I was warmly greeted by the ladies from Rock-It Promotions, who were running the event. I was whisked up to an elevated area of the dining floor, where I settled into a booth beside a few other guests.

Bowls of mega-popular quinoa-battered onion rings acted as centre pieces (and more obviously appetizers) throughout the room. Servers came around with clever cocktails made of green juice and Prosecco (because one balances out the other, no?).

I’d headed into the dinner thinking that, for once, there was a chance I might be able to eat something at a media event. In addition to being vegan I’m also celiac, which, in combination, is often tricky for restaurants to accommodate. At Fresh, the kitchen had been notified in advance, and the staff prepared foods especially for me. Be still my allergy-filled heart. I munched on a mini “ace of kales” salad (grilled tempeh bacon, jicama, heirloom grape tomatoes, toasted mixed nuts, green onions, and avocado on kale massaged with house dressing) and grilled tofu tacos on green wraps as appetizers, while everyone else feasted on the onion rings.

So here’s how the menu stacked up for my fellow tasters: green poutine, tangled Thai salad with crispy tofu, Fresh’s beach bowl, all-star salad with house dressing, and a chipotle bacon cheeseburger slider. I was pleasantly surprised to be able to eat everything – especially since the beach bowl is my favourite Fresh dish of all time – with the exception of the burger. A deconstructed wrapless black-bean burrito was a delicious substitution.

When you go to sample a menu, you expect teeny-weeny bite-size dishes, right? At the Fresh event, dishes were smaller than their usual, massive restaurant-sized servings, but holy heck, I was stuffed by the third dish. By the time dessert rolled around (a decadent but gluten-free brownie for me; two slabs of chocolate and carrot cake for the other guests), everybody was asking for “dessert to go” – proof that there can actually be too much of a good thing.

At the event, I spoke to co-founder Barry Alper. He told me that Fresh has been around since 1999 – technically since 1995 if you count its past life as a juice bar called Juice For Life. Alper referred to the Fresh’s Spadina location as a “neighbourhood nighttime spot,” which sounds about right to me. Regardless of whether or not the majority of patrons follow veggie diets, this location is insanely busy. This is likely because of its prime location, quick serving times and, most of all, a widely popular menu.

A lot of meat-eaters turn up their noses up at vegan restaurants before ever stepping foot in the door, assuming that there will be nothing but salad on the menu and they will leave hungry. But who could have a problem with a staple like the classic burger-and-fries duo? If you still have your doubts, let Fresh change your mind. Not only was I too full for breakfast the next morning, I didn’t need more than a light lunch.

Hosts Ruth and Barry were kind and accommodating throughout the evening. It was obvious how much they genuinely care about the foods their staff prepare and serve to the Fresh fan base.

My recommendation? Bring a pal or two, order some drinks and get your hands on a Buddha bowl. Ignore the Toronto Star’s opinion and keep in mind that comparing calories is an outdated concept. When you eat whole foods, your body absorbs and digests them differently. So go ahead, eat your heart out.