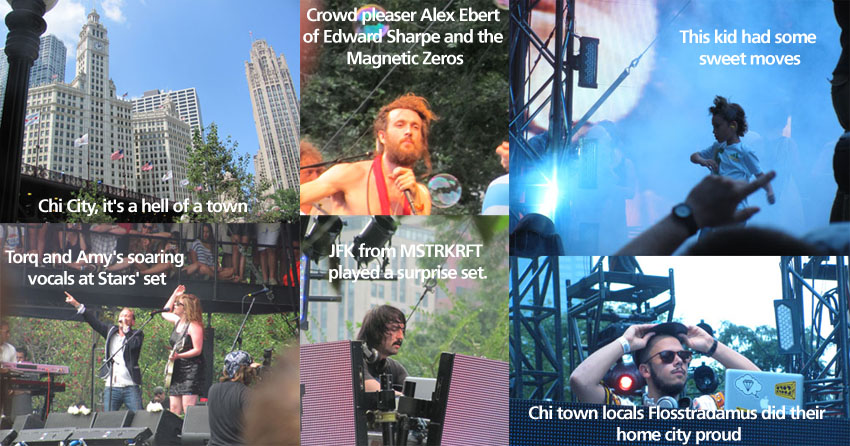 ARCADE FIRE KEEPS THE CROWD SINGING
There were a disproportionate number of Canadian bands at Lolla this year, and Sunday night headliners Arcade Fire did the Great White North proud. Drawing a massive crowd of the friendliest folks at the festival (our neighbours hailed from Scotland, Wisconsin, and Winnipeg, and in front of us were some Indiana natives who loved Degrassi. What?) Win Butler was in humble awe, rocking through a crowd-pleasing set of new songs (“You guys know all the words. It’s incredible.”) and old favourites. The set ended on a high note, with ‘Keep The Car Running,’ and then an epic, soaring finale of ‘Wake Up,’ with the crowd singing along, and continuing the chorus out into the streets of Chicago, with buskers to accompany the chanting masses.

MATT & KIM DO SOME BOOTY DANCING
Brooklyn duo Matt & Kim took the stage with a giant pair of matching grins, hip hop tracks in between songs, and anecdotes about meeting each other in NYC. Kim talked about asking Lollapalooza to project her tits on the giant stage-side screen when they last played the festival, and Matt quipped “Not even a giant video screen could make that rack look huge.” Kim then jumped into the crowd, and had them hold her up while she did a booty dance. In between adorable banter, the pair rocked out on songs like ‘Daylight’ and ‘Good Old Fashioned Nightmare.’

LADY GAGA CROWD SURFS, PREACHES, SLAYS A MONSTER, TALKS DADDY ISSUES
After crowdsurfing during Semi-Precious Weapons, Gaga took to the stage to headline the first night of the fest. With an elaborate stage-set that included a piano in the hood of a car and a giant clothes-eating monster, Gaga’s set lived up to her hype. Splitting evenly between crowd-pleasing dance numbers and ballads for the fans, Gaga was full of inspiring words for the gathered Little Monsters, talking about how her shows give a safe space where people can be themselves, and dedicated a song to her “favourite drunk asshole,” her dad. She also talked about her first time performing at Lollapalooza, on a small stage three years ago, and how far she’d come, thanking her fans for supporting her. But mostly, she told us to take our dicks out and dance.

STARS SHOWER THE CROWD WITH ROSES
More Montreal love came from Stars, playing an early afternoon set. Amy Millan’s angelic voice was accompanied by confetti canons and fully bloomed white roses showering the crowd with petals. Playing songs mostly from Set Yourself on Fire and new album The Five Ghosts, they were pitch perfect, and added a more rock and roll element to their songs, replacing synth parts with guitars.

EDWARD SHARPE AND THE MAGNETIC ZEROS HOST A SIT IN
With a grand gang assembled onstage, lead singer Alex Ebert jumped into the crowd, led singalongs, chantalongs, and clapalongs, and brought fans onstage for a sit-in during the last song. The assembled crowd went crazy, singing along to almost every song, while the Magnetic Zeros played themselves into a frenzy onstage.

CUT COPY REVEAL NEW SINGLE
There was tons of Aussie pride in the crowd for Cut Copy’s set, which was a high-energy run down of their past hits, as well as a preview of a few new songs, including the single ‘Blink and You’ll Miss The Revolution.’ One of the most shockingly consistent bands out there, Cut Copy have produced solid electronica and a rockin’ live act for nine years now, and from the sounds of the new tracks, their next album won’t disappoint.

JFK FROM MSTRKRFT PLAYS A SURPRISE SET
A pleasant surprise at Perry’s, JFK from MSTRKRFT filled in at the last minute for The Dirty South, and the crowd couldn’t have been happier. Rocking out a sweaty late-afternoon set, he had the assembled party kids dancing.

FLOSSTRADAMUS DOES THEIR HOME TOWN PROUD
The Chicago natives brought more than their fantastic beats to their set at Lollapalooza-they brought an adorable young dancer who busted some sweet moves in front of the DJ booth. The crowd loved him, and loved the local DJs, who gave shout outs to Kid Sister and kept fans moving.

View(s) of the Universe: Immersive Planetarium Experience Comes to the Junction

What I Learned From My Voyage to Giant Rock