What happens to a band over the course of two decades? Everything.

“Like a marriage, you can’t spend twenty years together without having incredibly difficult times, and incredibly gigantic conflicts,” says Amy Millan, who wasn’t sure how anyone would respond to the experiment that STARS: Together is.

It’s been a week since the daring production made its debut at Crow’s Theatre, and it’s garnered numerous glowing reviews. A play is not something that the beloved indie band had ever really planned (or needed) to do. But putting themselves out there in this way—exposed and vulnerable—is gutsy and moving.

The first STARS show I attended was back in 2000 (the same year that the band formed), when I was a student at Concordia. Like Amy, I was much younger; life was ahead of me. If I close my eyes, I can feel the energy of that night. There was much buzz about the newly formed Montreal band. It was the start of something beautiful, and the excitement was palpable.

After the show, we would go to an after party, and then another after party. We’d knock back drinks like there were zero consequences, because at the time, there really weren’t. The hangovers were doable, we didn’t have the responsibility of kids. Sure there’d be dramatic disputes with whomever we were fucking at the time, but in general, we were freewheeling—experimenting, discovering, and figuring out who we were, who we wanted to be.

This past Friday, at the opening night of STARS: Together, the scene was a different story. For one, much of the audience had grey hair. “We’ve been at it for so long,” says Amy, who is in her forties, like me. It seems like just yesterday that I was staring up at her, smoking a cigarette and shaking my hips at that concert, but it was another era. “It’s the story of ageing,” Amy says of the play. “It’s the story of having young children and ageing parents, being worried for the state of the world.”

At intermission, I ran into several parents that I know from my kid’s school playground. (As in, I know the name of their kids, but not their names.) There was something really nice about all of us being out at night, on a different side of town, collectively revisiting our youth, and experiencing a band we’ve loved for ages in an entirely new way.

Created by Zack Russell and Chris Abraham, who Amy now affectionately refers to as part of the band (“they are members of Stars and we are members of Crows”), the play blends fact and fiction to tell the story of both the band, but also it’s fan base. “If you don’t know what the word ‘meta’ means, you will after you come to this show.” 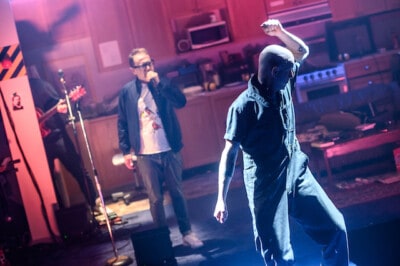 Set in “Zoomer”, or the studio that the STARS have rehearsed, lived, and grown in for several years, the play also captures a very specific moment in Canadian music history, when artists like Arcade Fire, Wolf Parade and STARS could rent cheap studios in Montreal to make music, and when bands made a living from record sales. “When you work hard, and put your music out, and people buy it – it makes you feel good. Now, you put it out, you can have 200,000 plays a month on Spotify in a month and that doesn’t mean the same thing as record sales. It’s hard to have the confidence to go forward in the work. We’ve lost 3/4 of our income. It’s a very difficult time for us now, and that’s definitely addressed in the show.”

While a lot of it centres on what has changed over the past two decades, the overarching message is one about loyalty and forgiveness, of sticking it out together. “Each of us have forgiven each other for our indiscretions and for the terrible things we’ve done to one another, over and over and over again. This play has really taught us that, especially when making art, we have to stay on track and stay in a state of forgiveness at all times. I’m married to the bass player [Evan Cranley] so we have to do that in a band AND at home,” Amy says with a chuckle. “But If you do it, the reward of being able to stick with one another is unparalleled.”

The writing is solid, the music is powerful, but above all, there is a kind of vulnerability on display that is extremely rare, even for live theatre. Perhaps part of the impetus to put on the show was for a new source of revenue, but much more so, it was an opportunity for a group of artists to challenge themselves creatively, and connect with their fans on an entirely different level. “Watching my bandmates push themselves into very uncomfortable places and commit to doing this crazy wild thing – it’s a beautiful thing to watch.”

If you think of the effort that goes into constructing an image of a band—be it the meticulously staged photo on an album cover, or the stage persona—this is an absolute deconstruction of that. STARS: Together unravels what we’ve watched for years, revealing to the audience the real-life wounds, insecurities, and goofiness behind each of the band members. It’s tender, bursting with feeling, and STARS are that much cooler for it.

“My goal as an artist today, and yesterday, and ten years ago, and fifteen years ago, and when I first started writing and got on stage, has always been one thing, and that’s to connect. It’s the most important thing, to me, to feel like I’m connecting. That means that the person that I’m connecting to doesn’t feel alone in the world.” It’s a goal that was always achieved with Amy’s powerful vocals and with STARS’ music, but this play adds a sincerity and depth to that connection that is incredibly intimate. We’re all in this together.

Stars: Together Is runs at Crow’s Theatre ’til Dec. 15th. Get tickets here.

CONTEST: Enter to win tickets to Secret Life of a Mother, now playing at Crow’s Theatre.